Full disclaimer for those wondering: yes, I am registered to vote in Lewiston, and yes, I will almost definitely be voting in this city come November 6, 2018.

For those of you who know me well, this article may come as a surprise. I’ve spent each year at Bates lunging towards people entering Commons to register them to vote in Lewiston on behalf of the Bates Democrats. For years, it has never even occurred to me to lend credence to the argument that we, as Bates students, should not vote in Lewiston. I would often dismiss those who did not want to vote in local elections as either a-politically apathetic or entitled elitists who detested Lewiston simply for being a marginalized city. And to be honest, I still believe these assessments to be accurate of many people who rejected my offers to register.

The central argument in favor of us voting in this city falls along the lines of us being genuine, active members of this community. We Batesies live in Lewiston for at least four years, meaning we agree to contribute to the local economy, help out in the community, and respect the local culture. In turn, we expect to be able to have a voice in its laws and electoral politics. But the way I see it, voting in Lewiston for Bates students is mired in privilege and currently lacks social awareness.

To be clear, voting is, for residents of the United States (and yes I said “residents,” because both citizens and non-citizens deserve voting rights), an inalienable right. But even though voting is a right for all residents everywhere in the country, that does not necessarily mean it should be used by certain people wherever they go; the term gentrification might sound extreme, but its ideas stretch beyond displacement of housing and small businesses.

In cities like Brooklyn, Boston, and San Francisco, gentrification involves rich, overwhelmingly white tenants, businesses, and political actors moving into and co-opting the institutions of economically disadvantaged communities, most often with large populations of color. Gentrification is about exploiting power and influencing the political and economic landscape of a neighborhood or city without interacting with the long-time residents and founders of the community.

In instances like this, I am by no means suggesting there should be laws or any coercive measures barring gentrifiers from voting in these communities. However, I am absolutely suggesting that gentrifiers’ voting is another way for them to marginalize already marginalized communities. Voting is an essential right, but where you vote and which communities you vote in cannot be viewed through colorblind lenses because politics itself does not have colorblind consequences.

How much time does the average Bates voter really invest in getting to know the local Francophone and East African communities? How many of us go out and volunteer for causes that aren’t explicitly political? How many see Get Out The Vote initiatives as anything more than a way for them to network for jobs and internships? How many have even once considered living in Lewiston or even in Maine after graduation? How many actually understood why the residents of Lewiston were so dissatisfied with off-campus parties that they voted to take steps to stymie them?

Furthermore, we have the privilege to move back to our respective states and communities if we don’t like the consequences of the policies implemented; Lewistonians do not. For many Bates students, voting is our own form of gentrification of trying to commandeer power within the economically-struggling city of Lewiston.

This is why I am more sympathetic to the view that, because we only live here for four years, we shouldn’t be voting here. Again, all Bates students should have the legal option to vote in Lewiston. But everyone–myself, included–must do more to pop the Bates bubble and bridge the divide between our communities to earn the benefits of voting in Lewiston, including with the midterms this November. 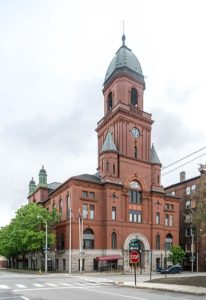