One of the many international crises in recent years has been the ongoing devastation in Myanmar. Specifically, we have seen the presence of an authoritarian junta using ethnic cleansing against the Rohingya Muslim minority.

For those unaware, Myanmar is a small country in Southeast Asia with a population of 53 million people, well known for upholding strong ties to Buddhism. Ever since the official Burmese coup d’etat on March 2, 1962, the Rohingya have been oppressed by totalitarian rule. During this coup, the country witnessed the fortitude and influence of General Ne Win, who enacted drastic reforms to change Burmese society and its government. From 1962-1974, Win and his government implemented nationalist, Marxist, and Buddhist initiatives en masse. One of the many notable aspects of Win’s totalitarian regime was the use of extreme military force against those in opposition to his government.

It is these major social and governmental reforms that reverberate into the genocide against the Rohingya. They are one out of 135 ethnic minorities that are a part of Myanmar’s population, and since last August, the government in Myanmar, led by Win Myint expelled around 700,000 from their homes in the northern echelons of the country. The main reason for this mass expulsion is that the Myanmar government has declared Rohingya citizenship illegal because, apparently, they have not assimilated with the Buddhist citizens.

Unfortunately, the devastation to Rohingya Muslims has been difficult to record. According to Hannah Beech of the New York Times, “with the Myanmar government restricting access to the area where the Rohingya once lived, even refusing to let top United Nations officials into the country, it is impossible for investigators and journalists to gather firsthand evidence of atrocities.”

Rohingya Muslims are not only suffering from political misrepresentation but also endure the harsh conditions of immigration. Since the ethnic cleansing began, they have desperately fled into neighboring Bangladesh in a province called Cox’s Bazar. Due to increased military pressure from the government in Myanmar, the Rohingya have been unable to remain in one place safely for a long period of time.

Even before the Rohingya became refugees, Myanmar had been a witness to major gender discrimination. For Rohingya women, sexual violence is unfortunately a commonality and results in the degradation of women all across the country. As Rohingya women are fleeing from Myanmar to Bangladesh, they are facing continuous oppression from men who are in charge of brothels, hotels, and other sites for organized prostitution.

Many of these young women and girls are trapped in the sex trafficking system and can never find a way out. In fact, many other Rohingya women are so disenfranchised that the only means of escape is to participate in adultery and sex under the will of men. As BBC News writes, “The girls appeared war-torn between poverty and prostitution – they said that without the sex work they would not be able to provide for themselves or for their families.”
Earlier in 2017, the United Nations High Commission For Refugees (UNHCR) said there were around 307,500 Rohingya Muslims living in refugee camps, with most of them being located in Bangladesh. While they are being supported with supplies such as water, food, and healthcare, it is simply not enough. Despite political and international support from the Bangladeshi government and the UN Security Council, the Rohingya continue to live in extreme poverty.

Is it possible to somehow, someway help the Rohingya? There needs to be more international aid and more public awareness in order for the Rohingya to gain more support. From the way the situation looks now, it continues to be an inevitable path towards abandonment and suffering. But though I may not have the power or authority to help the situation in Myanmar, at least bringing this news to light might inspire others to take action. 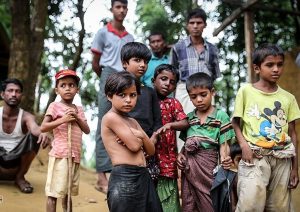 “Acknowledge that our Souls have Power”

Renowned sculptor and performer Vanessa German visits Bates, installs art exhibit On Oct. 25, Vanessa German celebrated the opening of her art installation Miracles and Glory Abound in the Bates Museum of Art with a performance for students, staff, faculty and community members. German held the audience in thrall as she began her opening performance. […]

For those who have somehow missed the headlines from the past couple of weeks, Nike’s new campaign honoring its 30th anniversary of their slogan — “Just Do It” — features Colin Kaepernick, a former NFL quarterback infamous for kneeling during the national anthem in order to protest racism, police brutality, and a nation that does […]