With the rise of the #MeToo movement, one would think it safe for a woman to share past trauma of sexual assault. It seems incongruous that, despite ever growing support for movements like the Women’s March, which has an Instagram page with upwards of one million followers, Dr. Christine Blasey Ford has received death threats and violent backlash for testifying on behalf of her allegations against Judge Brett Kavanaugh.

Ford’s accusations draw obvious and eerie similarities to Anita Hill’s allegations against then-Judge Clarence Thomas twenty-seven years ago. In 1991, sexual harassment was still taboo, but there weren’t thousands of women coming forward to share their stories like we see today. Despite outlandish accounts of sexual harassment, Thomas was appointed to the Supreme Court, where he still sits today.
Anita Hill’s accusations were revolutionary and earned 1992 the title of “The Year of the Woman.” Her courage gave American women hope that they too could someday share their stories. After watching last week’s testimony, what I gathered is that regardless of the newfound fervor to support sexual assault survivors, American society has not caught up with the changing landscape.

If you consider the facts, Ford had little to gain in testifying. In standing before the Senate Judiciary Committee, she was forced to relive a traumatic event in front of the entire country. After all the backlash she has received, it would have been far easier to drop the allegations. In her testimony, she stated: “I am here today not because I want to be. I am terrified. I am here because I believe it is my civic duty to tell you what happened to me while Brett Kavanaugh and I were in high school.” It takes a pretty immoral person to fabricate an event, complete with graphic and specific details, about a sexual assault.

The only word I can think of to describe the behavior of the Judiciary Committee is immature. The hearing became an issue of partisanship rather than sexual assault. Despite Ford passing a polygraph test and agreeing to an F.B.I investigation (two things Kavanaugh has not done), Republican Senators still accuse Ford of being a pawn in a Democratic scheme to tarnish Kavanaugh’s appointment. Senator Lindsey Graham (R-South Carolina) addressed the Democrats of the committee, stating: “What you want to do is destroy this guy’s life. This is the most unethical sham since I have been in politics. And if you really wanted to know the truth, you sure as hell wouldn’t have done what you’ve done to this guy.” The fact that Graham could justify Kavanaugh’s incoherent rhetoric and ignore the facts that refute his denial of Ford’s accusations goes to show that he, like many in Washington, value partisanship over morality.

If women’s voices were truly valued, not a single senator would question Dr. Blasey Ford’s motives. To doubt her intentions and integrity in sharing her story is disheartening to American women who thought they finally had a chance to seek justice.

No woman should ever feel unsafe about coming forward. When a woman says she was sexually assaulted, she should be heard without bias in a welcoming and understanding environment. If Dr. Blasey Ford’s hearing accomplished anything, it’s shown us that, as a society, we have a long way to go before we can call women first-class citizens. 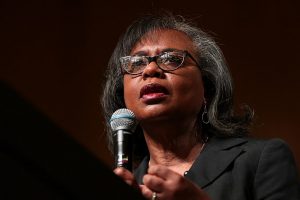