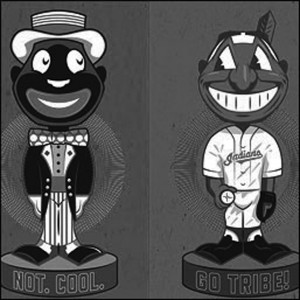 An article about Robert Griffin’s knee that appeared in the January 16th edition of the Bates Student was accompanied by a stock image of the logo of the National Football League team based in Washington, DC whose name is a racial slur that is just as offensive to many Native Americans as the N-word is to many African Americans. But it is not just members of these two groups who are offended by these terms. People of all ethnicities are offended by them. Words and images that demean one group of people demean us all.

Logos used by the Washington football team and the Cleveland and Atlanta baseball teams are offensive for many reasons, as are the logos formerly used by Dartmouth College and the University of Illinois. (They are no longer used because the NCAA banned teams with racist names and mascots from post-season play.) These logos appropriate the identities of Native Americans, many of whose languages and cultures have been destroyed by Euro-Americans. They take sacred religious symbols from Native American cultures – eagle feathers, face paint, and peace pipes – trivialize them, and exploit them for the commercial and entertainment purposes of Euro-Americans. And they perpetuate outdated, demeaning stereotypes of Native Americans that make it difficult for Native Americans to represent themselves as part of contemporary American society. To put it bluntly, these logos reduce Native Americans to savages, to defeated enemies who have been “erased” from today’s world.

Close your eyes and think: “Indians.” What comes to mind? Do you see Bates students? University professors? People suffering from poverty and diabetes? Construction workers? Lawyers? Or do you see caricatures of people with bright red skin, big noses, and huge grins who are prancing around, riding horses, and waving tomahawks? Why? It’s those sports mascots, not to mention other standards of American popular culture like Peter Pan, old Westerns, with a little help from Uncle Walt and Disney Studios.

Many Native American leaders have criticized the use of Indian mascots. James Yellowbank, Winnebago member of the Indian Treaty Rights Committee described Chief Illiniwek as “a racist, degrading figure that demeans our heritage,” adding, “My Indian friends call him Little Red Sambo.” Oren Lyons, an Iroquois leader, said, “Army had a mule for a mascot, Navy had a goat, Georgia had a bulldog, and Syracuse had an Indian. . . . It was as if we were less than human.”

Indian mascots objectify and commodify Native Americans and their cultures. Cigar store Indians were used as advertisements to sell tobacco. Urban Outfitters used Navajo patterns to sell clothes, at least until lawyers representing the Navajo Nation filed suit against them and won an injunction forcing them to stop. What, after all, is really “Navajo” about a “sparkle and fade Navajo pointelle tank top,” Navajo print panties, and “deeply tribal” Navajo T-shirts?

You buy shoes at a shoe store and groceries at a grocery store. Guess what you can buy at the Dartmouth Review’s Indian Store? (Check out http://www.cafepress.com/dartreview, but look quickly.)

Imagine a team named the Detroit Jews – to make the comparison more apt, it should really be the Detroit K . . . s. Their logo is a rabbi wearing a yamaka and carrying a Torah. Or better yet, imagine a team named the Pittsburgh N-words, whose logo is an N-word eating fried chicken or watermelon! Now ask yourself: “If these names and logos are so offensive, why aren’t the Washington R-words and bucktoothed, grinning, tomahawk waving, Indians equally offensive?”

Native Americans have less political power in America than African Americans do, so they have not yet been able to eliminate racist “Indian” imagery from American popular culture. In his inaugural speech, President Obama referred to Seneca Falls, Selma, and Stonewall; he didn’t mention the Longest Walk, Alcatraz, or Wounded Knee. Maybe next time.

You may be thinking: “But what about the Dallas Cowboys or the Fighting Irish of Notre Dame? Are they offensive too?” These examples are very different from the Washington Slurs (as Leonard Pitts, an African American columnist, refers to them). The Fighting Irish and the Cowboys are examples of self-ascription; Native American mascots are examples of ascription by others. The difference is huge. A university founded by Irish Catholics and a football team owned by white Texans have chosen names and mascots based on their own identities. They did not appropriate them from other people they have conquered.

If the Penobscot Nation had a high school on Indian Island and decided to call their teams “R-words,” or “Indians,” or even “Native Americans,” “Indigenous People,” “Aboriginals,” “First Nations People,” or heaven forbid, “Penobscots,” that is their choice. If Irish Catholics or white Texas cattle ranchers find the Fighting Irish or the Cowboys offensive, I would encourage them to speak out, and I would support them. Native American activists have spoken out. They find Indian mascots offensive. I do too. When I was in high school, I used to wear a Chicago Blackhawks jersey. Since I learned about the Indian mascot issue, I have not worn it, even once. And I never will. Now I know what it means.

The white, Latino, and Native American members of an intramural basketball team at the University of Northern Colorado made national news a few years ago when they named themselves “the Fightin’ Whites.” Their mascot was a “white man” in a business suit. Rush Limbaugh was not amused.

Charlene Teeters is a Native American artist and activist who began the campaign against Chief Illiniwek when she was a student at the University of Illinois. Now she is the Vice President of the National Coalition on Racism in Sports and Media. In a documentary film about Chief Illiniwek, she said, “We paid with our lives to keep what little we have left of our culture. That’s what we’re protecting. Our history, our identity, our religion.” When a white undergraduate at the University of Illinois would dress up as a Native American religious and political leader during half time at basketball games, Teeters felt it was as if a powerful white institution were saying “We own you.” In tears, she described the pain, the humiliation, and the degradation that she and her young daughter felt while watching the half time “show.” Seeing Indian mascots, she said, is a daily reminder of the racism and genocide her people have experienced.

Just a few days ago, on February 7, 2013, the National Museum of the American Indian held a daylong workshop entitled Racist Stereotypes and Cultural Appropriation in American Sports. Take a look at http://nmai.si.edu/multimedia/webcasts/

To learn more about the Native American mascot controversy, read Team Spirits by Richard King and Charles Springwood, Dancing at Halftime by Carol Spindel, or In the Game by Amy Bass. Or watch the wonderful documentary entitled In Whose Honor? by Jay Rosenstein. Or even better yet, take Anthropology 234, Myth, Folklore, and Popular Culture next fall.

Loring M. Danforth is a professor of anthropology at Bates College.