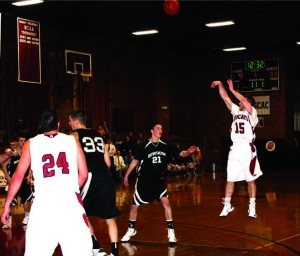 Following a weekend in which the men’s basketball team split contests at rivals Colby and Bowdoin, the men returned home to continue their quest for a NESCAC playoff berth.

This past Friday, the Bobcats took to the court to face Connecticut College in an important NESCAC game.

The atmosphere on campus was festive to say the least following the events of the Puddle Jump and Winter Carnival. With temperatures in the teens, Bobcat Nation took the energy inside and blacked out Alumni Gym to watch the men’s basketball team take on Connecticut College.

“The atmosphere in alumni is unlike any other NESCAC gym,” noted junior Luke Matarazzo. “Because the gym is so small and tight, with the fans pretty much right on the court, it gets so loud and the energy is crazy–it’s such an advantage for us.”

The team clearly fed off that energy as they eventually pulled away from the Camels in the second half. Leading the charge was sophomore guard Graham Safford, who knocked down several big shots on his way to 17 points. Safford also had three steals in the win.

Senior guard Mark Brust poured in 15 points of his own, while also chipping in five assists.

Matarazzo said, “Defensively, I just try to go out there and play as hard as I can, using my quickness to my advantage. I know if I can speed the opposing point guard up it will disrupt the entire team’s offense and translate into easier points for us.”

Matarazzo’s defensive intensity was contagious; a group of defenders held Matt Vadas, the NESCAC’s leading scorer, to a 4-16 shooting day, while holding him to 14 points.

“Going into the game myself, Graham Safford and Billy Selmon knew we were going to be responsible for covering [Vadas],” explained freshman Adam Philpott after the game. “When I was in the game I tried to be real physical with him. I knew he could really shoot the ball so I tried putting as much pressure on him as possible.”

Eventually, the Bobcats sealed the deal and secured a big NESCAC win, 75-60.

The team had a quick turnaround and hit the court the next day against Wesleyan.

A shaky first half put the Bobcats in an early hole, as they missed eight of their first ten shots. Wesleyan took advantage, and went into halftime with a thirteen-point lead.

Bates did make a run in the second half, with Safford as the catalyst. Early in the half, Safford hit a three and followed it with a driving layup, prompting a quick Wesleyan timeout.

Matarazzo nailed a three of his own coming out of the timeout, part of a spurt that saw Bates cut the Cardinals’ lead to three points.

That was as close as they would get; Wesleyan responded with a run of their own, and comfortably closed out a 61-51 win.

Safford led the way with 18 points followed by Matarazzo, who recorded 16. Senior Ed Bogdanovich had a team high seven rebounds along with two steals.

“We definitely had a chance to win but what it came down to in the end was our inability to sustain the level of play we are capable of for forty straight minutes,” noted senior forward Taylor Gartley. “After the way we played in the first half, it was difficult to erase the deficit but we managed to get it within reach in the final minutes.

After the 1-1 week, Bates currently sits at 2-4 in conference play, tied with Wesleyan for the eighth and final NESCAC playoff spot.

The men have the week off before they are back in action on Saturday against Tufts.