The Bates Student • May 31, 2022 • https://thebatesstudent.com/23463/arts-leisure/every-brilliant-thing-a-perfect-send-off-for-johnny-esposito-22/

“Every Brilliant Thing”: A Perfect Send-Off for Johnny Esposito ‘22 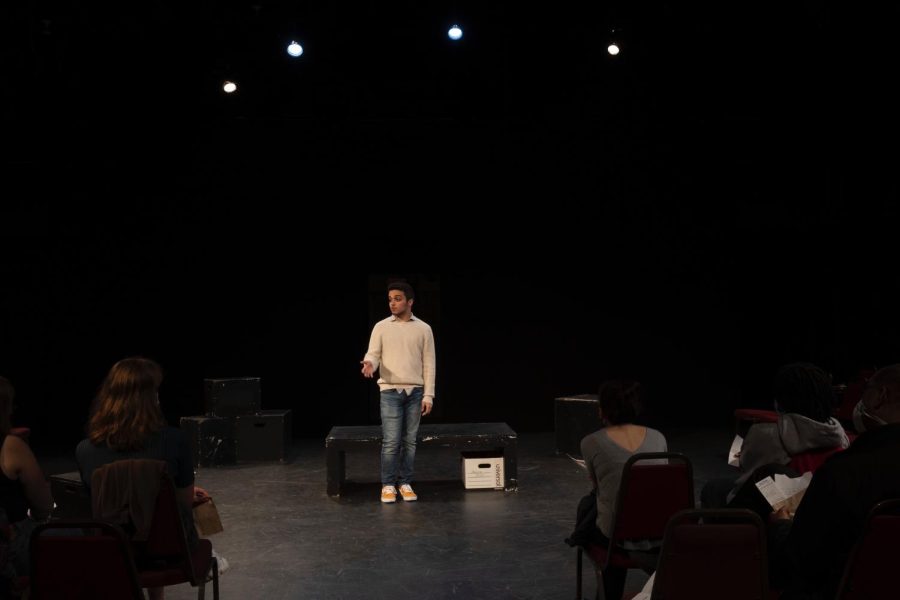 As I walked into Gannett Theater on May 21, my friend and I were greeted by Johnny Esposito ‘22. He asked us to each take two items from his box. His instructions were that when he said the number corresponding to my items, I was to read what my item said aloud. On a scrap of paper, I had “317. The even numbered Star Trek films” and on a packet of oatmeal I had “996. Really good oranges.”

These two items make up the eponymous list at the center of “Every Brilliant Thing,” a play by Duncan Macmillan and Jonny Donahoe. As part of an Independent Study in Performance and Production, Esposito spent his Short Term rehearsing to bring this hour-long, one-man show to life.

The character of “Every Brilliant Thing” goes unnamed, so let’s just call him Johnny, for simplicity’s sake. When Johnny was seven, his mother attempted suicide for the first time. To cheer her up, he decided to make a list of everything that was brilliant about the world. (If “brilliant” feels like an odd word to use here, rather than say “wonderful,” it’s because Macmillan is British.)

Johnny’s story begins there, the night of his mother’s first attempt, all the way through to the “present day,” sometime after his mother’s death (she does not survive her third attempt). It chronicles Johnny’s changing relationship with the list and his own mental health. Stories from his life are interspersed with facts about suicide, such as Samaritans’ (an international suicide prevention organization) media reporting guidelines that get broken rather frequently.

In many ways, “Every Brilliant Thing” was a perfect culmination of Esposito’s Bates experience. A theater (playwriting) and psychology double major, Esposito is passionate about mental health, especially in male populations. Several of the plays he’s written examine suicide, but not from the perspective of “Every Brilliant Thing.”

In addition to writing, Esposito has also acted in several Bates productions. His 2019 turn in “The Zoo Story,” directed by Nicky Longo ‘21, prepared him to command attention: he had to deliver a 20-minute monologue in a 60-minute play with only one other actor to bounce off of. Taking on the one-man show was simply the next step in that journey.

Except, “Every Brilliant Thing” is not a traditional one-man show. In addition to the audience shouting out their brilliant things, several members of the audience actually join in on the action. Every performance is different, with Esposito telling me he decided who to use based on who is in the room.

At my performance, my roommate, Becca Vaules ‘22, was the first victim, playing the veterinarian who puts down Johnny’s dog in his first experience with death. Miles Hagedorn ‘25 played the sock-puppet-weidling counselor Johnny sees as a child. Jiayi Yang ‘25 played a college professor who teachers “The Sorrows of Young Werther”; the book spawned the naming of “the Werther effect,” or suicides going up after a highly publicized one. Frances White ‘23 played Sam, Johnny’s first love and ex-wife. And, in a bit of truly inspired casting, Esposito’s father played Johnny’s dad.

Esposito told me that the play is written in such a way that it is not true improv working against the audience-actors, whose improvisations tend to follow a similar pattern due to the constraints Johnny presents them. Every interaction, though, felt genuine. It was fun to see the audience join in, from the touching speech Esposito’s father gave at Johnny’s wedding, to Hagedorn’s sock puppet, to Yang’s impassioned reading of the back cover of “The Sorrows of Young Werther,” to Sam’s perusal of a Maine cookbook at the library.

Esposito’s performance was magnetic. He commanded the stage with authority, yet still managed to put everyone, even his audience-actors, at ease. I saw at least one person shed a tear and came quite close to it myself at a couple points. Esposito and co-director Robby Haynos ‘22 crafted a joyful, uplifting production that even in its darkest moments showed the strength and resilience of humanity.

Johnny gives advice to anyone contemplating suicide: “don’t do it.” After two years of pandemic slog and violence seemingly everywhere, finding anything to be happy about or hopeful for can feel mind-numbingly hard. But “Every Brilliant Thing” is a wonderful reminder of the small joys of life.

After the show, I wrote down some of my own brilliant things for Esposito to dump out at the end of the next performance. I’d seen the call for people to do so earlier in Short Term, but had no idea what to say, so I didn’t contribute any. But after sitting in community with everyone in Gannett for an hour, I wrote at least five. #at least 6: Getting to see Esposito shine one last time.

From Jake Viswanath, Bustle: “If you or someone you know is seeking help for mental health concerns, visit the National Alliance on Mental Health (NAMI) website, or call 1-800-950-NAMI(6264). For confidential treatment referrals, visit the Substance Abuse and Mental Health Services Administration (SAMHSA) website, or call the National Helpline at 1-800-662-HELP(4357). In an emergency, contact the National Suicide Prevention Lifeline at 1-800-273-TALK(8255) or call 911.”