The Bates Student • May 7, 2022 • https://thebatesstudent.com/23417/news/students-hold-pro-choice-protest-in-response-to-roe-v-wade-scotus-leak/ 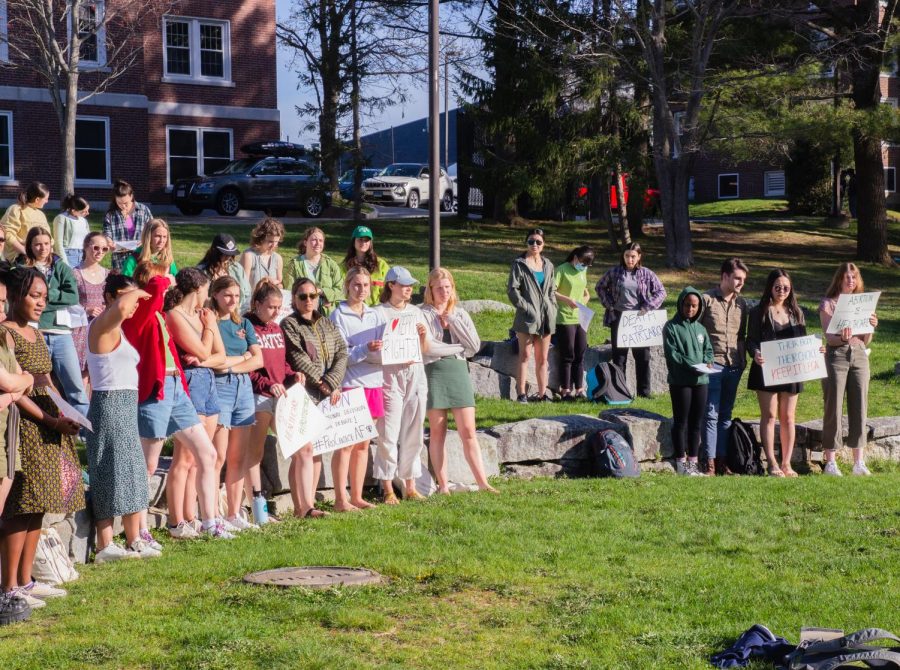 Students decked in green gathered at the Bates amphitheater to protest the potential overturning of Roe v. Wade on Thursday evening in a demonstration of resistance and solidarity.

The pro-choice protest, organized by the Bates Leftist Coalition (BLC), came three days after POLITICO released a draft opinion revealing that the Supreme Court of The United States is set to strike down Roe v. Wade and end the existing nationwide protection of abortion rights. While the Supreme Court decision has yet to be made official, the leak was confirmed to be an accurate draft of the document. The decision is expected to be released in late June or early July.

The protest was part of a larger nation-wide walkout called the Reproductive Freedom Protest, according to BLC organizers. Similar protests occurred at other liberal arts colleges, like Connecticut College and Pomona.

“As leftists and just as people, we believe that abortion rights and reproductive rights are human rights,” said Madanes in an interview before the rally began. “We’re really trying to agitate people, inspire people, let them know they have a part to play in this. This is just the beginning.”

Students were instructed to wear green to the rally to both support women and shed gender binary stereotypes, Madanes told The Student.

“Green is the color of the Latin American, specifically Argentine, feminist movement. I think it’s great to use a color that is not pink because we are not trying to attach ourselves to stereotypes about women,” they said.

As students began to gather, BLC organizers handed out signs with statements of support for reproductive freedom and provided chant sheets with phrases like “Hey ho! Save Roe! All these judges got to go!” and “Pro-life is a lie, they don’t care if people die.”

Madanes gave an opening speech to the crowd about the importance of Roe v. Wade.

“We are here today because Roe v. Wade is about to be overturned. This would remove some of the most important, albeit weak, protections we have over our reproductive rights,” they said. “We must fight for our right to health, to life, and to bodily autonomy.”

“An attack on abortion is an act of war on lots of groups of people in this country,” said Tasha Kaluzynski ’22 in a speech following Madanes. “We are lucky enough to be among thousands of people taking action on college campuses across the country, and student power has historically been an extremely strong contingent for social movement in this country.”

“One of the most important results of a day like this is showing people who have had abortions that we support them and that there is a community who cares,” Kaluzynsky said.

Bora Lugunda ‘25 expressed her tiredness and frustration in a speech at the rally.

In an interview after the protest, Zoe Wynn ’23, a student who led one of the chants, emphasized how she believes the overturning of Roe v. Wade would affect women’s equality.

“I’m here because we are living through a momentous historical event where we’re going back 50 years and the rights of women are [being] completely infringed [upon]. If Roe v. Wade is overturned, women are inherently seen as less equal under the law,” Wynn said. “There’s no way that not protecting all types of healthcare for women is allowing equality for all.”

Some students felt that attending Thursday’s rally was the least they could do to show their solidarity in support for abortion rights.

“I’m mostly here because it’s really easy to get overwhelmed with information so I was like maybe I should show up here, see what people have to say. It’s literally the least I can do,” Nimco Jama ’25 said.

“I want to take what little action that I feel like I can, to use my voice and do whatever I can to make sure it’s known that this is not okay.”

David Simsak ’24 was inspired to attend because of how the overturning of Roe v. Wade could impact rights in his home state.

“I grew up in the South in a place where, right now, abortion access is being restricted, where aiding abortions is being criminalized. I have friends and families who would be criminals now under new law,” Simsak said. “I think even though this is a really small thing, showing up and showing that you care and can put pressure on people is still really important.”

BLC provided attendees with other actions to take after leaving the protest, such as recording themselves wearing green, vocalizing their support Roe v. Wade on social media, supporting legislation that upholds reproductive rights and donating to abortion funds and bailout funds for people who have had abortions.

Madanes and their other BLC co-organizers believe this is an important cause, and one that Bates students should be focusing on.

“If you have time, give your time. If you have money, give your money. If you have a voice, use it. Use it to uplift the voice of others,” Madanes said. “Even if this is a relatively small rally, it is a part of something bigger. We, as college students, have power. This is such an unpopular decision to overturn Roe v. Wade, and we need to show that.”