“Every Speck of Rain, a World:” Selbrede’s Life Through Raindrops 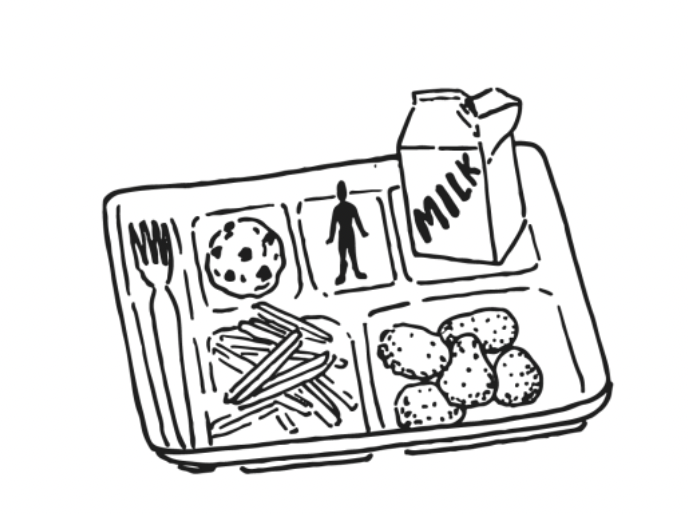 Jolie’s illustration for Chapter 6, “Around Your Finger,” represents feelings of smallness at school through a person trapped in a lunch tray.

Oftentimes, I think of memoirs as stuffy reflections written by people who are much farther down in life and who carry vastly different experiences than me. As a result, they’ve never been my go-to. I guess part of that attitude stems from me only being exposed to the memoirs of out-of-touch celebrities and politicians, leaving me to think they’re the only ones capable of producing such works of writing.

When I discovered that an exceptionally talented peer of ours at Bates was about to release his micro-memoir, I was thoroughly intrigued. Craig Selbrede ‘22 announced this work, “Every Speck of Rain, a World,” on March 30 to his Instagram followers. With illustrations by Gabrielle Jolie, this memoir sets out to address all the friends Selbrede has ever had from four stages in his life: Aquinas Montersorri, Folly Quarter Middle, River Hill High, and Bates College. After previewing it, readers can expect a touching, honest and occasionally sad look at what it means to have a friend at all points in one’s life.

When I opened the manuscript, my eyes jumped to the dedication. Similar to what he wrote on his Instagram page, he notes that his memoir is dedicated to those friends, “especially the ones I’ve yet to meet.” I like this dedication because, after reading the stories, I look at it and realize how open Selbrede has been, and will continue to be, to all sorts of experiences, even the rougher ones.

His memoir contains 30 chapters, each with a separate story about someone who’s played a role in his life. With prominent, cute illustrations, you might think it is a lighthearted and carefree look on past memories. But it is not at all.

While the memoir is by no means a downer, it makes an exceptional effort to include Selbrede speaking openly about people who initially presented themselves as friends but eventually grew to hurt him. The balance between chapters like this and the happier ones makes it all the more realistic.

An immediate example is in Chapter 2, “Young Enough to Forget,” where we are introduced to a friend who seemed to have a strong bond with Selbrede; he notes that efforts were made by a more popular girl to pit the two against each other. We learn, though, that this friend set Selbrede up to flirt with another friend of theirs who, unbeknownst to Selbrede, wasn’t remotely interested. He then says that he feels shame when he thinks of this person.

You might read this and think it’s strange to include a chapter about someone who’s hurt you, but I think it’s incredibly refreshing. It’s far too unrealistic to write a compilation of dedications to all the people or experiences that were plainly wonderful. It’s dishonest to yourself to exclude the feelings of, as Selbrede puts it, “shame,” because that’s an aspect of life that all of us experience to get to where we are now.

While reading, I was touched by Selbrede’s inclusion of memories like this that didn’t always result in a positive experience. It led me to think about some of my more negative interactions and how I should be viewing them now that I’ve grown older.

The illustrations are subtle yet powerful. Oftentimes, they capture a poignant bit from the story that’s being told. A humble-looking taco appears before Chapter 25, “The Soccer Player,” a chapter that explores the waning friendship Selbrede has had with a student at Bates where the only photo he has of them together is a shot of them having Taco Bell. Jolie’s additions to each chapter include one thing from the text that almost serves as a way for the reader to take what they’re reading and connect it to a simple physical object they’re likely to see in their life.

Another moving illustration is for Chapter 6, “Around Your Finger.” This is the first, most significant dedication to someone that really put Selbrede down. He writes about this person’s popularity and subsequent refusal to even acknowledge him. This section largely takes place at Aquinas Montessori, and he writes, “I often think of how small you made me” (15). With the school being the prominent setting, a miniature figure of a person stuffed inside a lunch tray is the illustration for this chapter. It’s a beautiful yet saddening way to depict how this person made Selbrede feel at school.

The final chapter allows Selbrede to explain the title further. The friend of interest here is a great person Selbrede has had the pleasure of knowing at Bates. He writes how they met during orientation, started studying together freshman year and grew to share many late nights and inside jokes. At the end, he acknowledges that they’re both almost at the end of their college career where their lives will soon go in very different directions. He doesn’t consider this to be sad, though, as he considers this great friendship of theirs a speck of rain containing a world within it. Going back to the introduction, he writes that each memory is like a rain droplet on a windshield. Each is distorted and blended, but when he looks at them, he sees more than just himself.

The final words of the memoir feature Selbrede reflecting on this metaphor, saying that when he thinks back on these worlds within each droplet, “I will know that for a moment, I was not alone” (48). I like to think that Selbrede’s decision to close the memoir this way is representative of his deep appreciation for being able to know people throughout his life. Even though some of these specks take Selbrede back to distressing points in his life, these final words suggest that he’d rather take that than being alone. I couldn’t agree more.

Selbrede will publish “Every Speck of Rain, a World,” this May through his company ACC Pub Ink. If you are interested in pre-ordering, you can fill out the interest form; there is no monetary commitment attached to filling out the form.