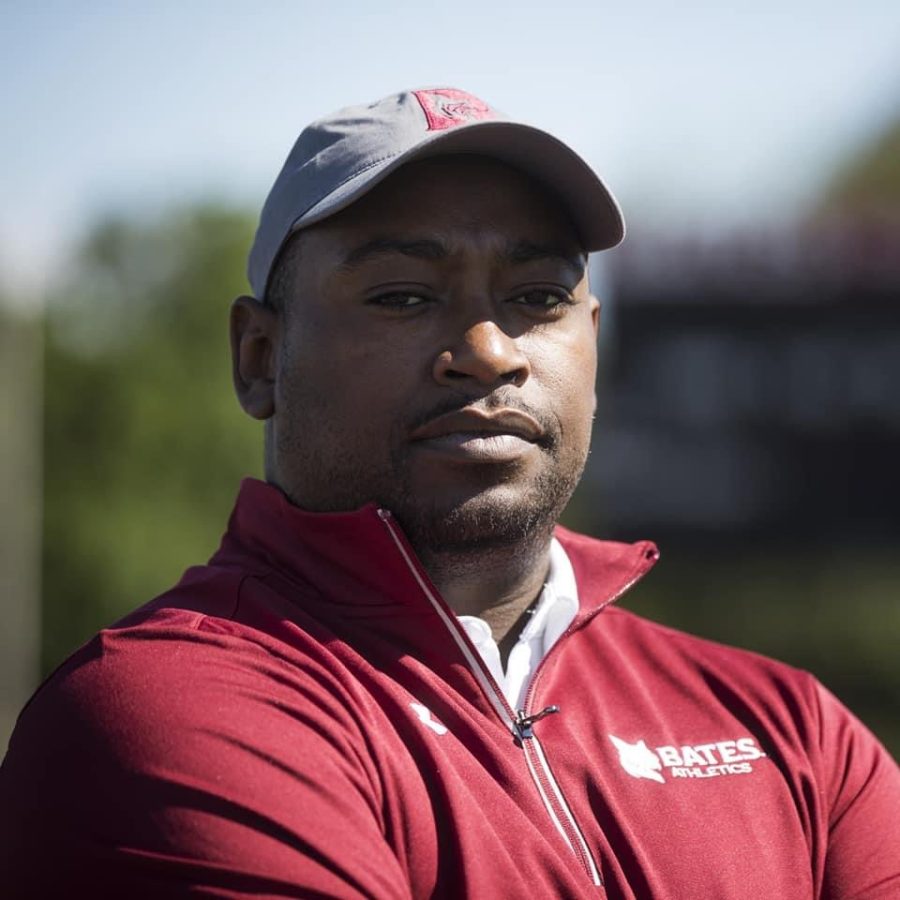 Former Bates Head Football Coach Malik Hall filed a civil lawsuit in the U.S. District Court, District of Maine against the college yesterday, claiming he faced “severe racial discrimination” during his three-year tenure leading the football program, according to court records obtained by The Student.

Hall, who is joined in the suit by his wife, Ayesha, and his three children, Asah, Kayah and Malik Jr., alleges that as a result of the treatment he faced, he has suffered “economic damages, loss of opportunity, loss of reputation and mental anguish.”

In June 2021, Hall filed a separate complaint of discrimination with the Maine Human Rights Commission and the U.S. Equal Employment Opportunity Commission. Those complaints are not yet public documents.

Hall began his tenure as the first Black head coach in Bates history in 2018 after a career coaching at many other colleges and universities, including a three-year stint as the defensive line coach for the University of Pennsylvania.

Bates College announced he would not be returning to the program in July 2021.

After the lawsuit was filed today, The Student reached out to Mary Pols, the college’s spokeswoman for a response.

“The college has not seen the lawsuit filed by Malik Hall, but I can tell you the college strongly disagrees with the account of events as described in the Bates Student,” she said.

In his complaint, Hall alleges that the college struggled to find him appropriate housing once he was hired. It presented him two options, he claims: one too small for him, his wife and their three children, and the other needing many renovations.

Hall alleges that despite the college promising him housing immediately, upon his arrival in Lewiston he and his family had to stay in a hotel for over a week. Hall and his family moved into a house located at 52 Ware St. in Lewiston on July 27, 2018, after a conversation with Vice President for Campus Life Joshua McIntosh, who, Hall claims, told him that the home was safe to move into.

After moving into the home, Hall alleges he discovered that “the college had previously – and unsuccessfully – attempted to remediate black mold” that was present in the home, something he was not informed of before he moved his family in.

According to Hall, he took photographs of the mold and its “widespread infiltration in the home’s basement.”

He alleges in the complaint that since his family’s exposure to the black mold, his three children have experienced negative health side effects, “including difficulty breathing and nose bleeds,” which they continue to suffer from.

In his complaint, Hall accuses Athletic Director Jason Fein of several instances of inappropriate behavior. Hall claims that despite conveying to the college during the interview process and after that he wished to hire his brother, Jamier Hall, as the team’s videographer, Fein “accused him of a lack of transparency” and of “engaging in nepotism.”

Additionally, Hall claims that on Aug. 16, 2018, Fein “confronted [Hall] regarding an alleged audio recording of [him] using an anti-gay slur while speaking to the Bates Football team.”

Hall wrote that he “immediately and forcefully denied the accusations and asked to hear the alleged recording,” but claims that Fein never produced the recording. He also claims that no one from the college ever spoke to him about the accusation afterward.

In the civil complaint, Hall alleges that on Aug. 22, 2018, Senior Associate Director of Athletics and Senior Woman Administrator Celine Cunningham instructed him to remove prayer from the football program’s practice schedule, claiming that some members of the team may feel coerced to participate.

The complaint does not specify how long it took, but the college later let Hall incorporate prayer into the schedule once he “suggested and requested” the college’s multi-faith chaplain conduct the optional prayer.

“It is clear the college initially prohibited prayer due to an assumption that Coach Hall – as a Black man – would lead prayer in a manner that the college considered culturally unacceptable,” according to the complaint. “Bates ultimately allowed the kind of optional prayer for which Coach Hall had always advocated,” Hall claims.

Hall alleges that on Sept. 13, 2019, the day before he was set to leave for the season’s opening game against Amherst College, Title IX Officer Gwen Lexow requested a meeting.

During the meeting, Hall claims, Lexow informed him that he was being accused of sexual assault, but refused to share the nature of the accusation or where and when it had occurred.

In the complaint, Hall wrote that “as a Black football coach at a predominantly white school, any accusation of sexual impropriety on his part – even one as nebulous and unfounded as the one at issue – carried the likelihood of both ruining his career and placing a stigma on his family, friends, and the student-athletes that he coached.”

Hall claims he received no more communication or information from the college about the allegations or investigation; the complaint does not indicate whether Hall continued to inquire about the issue.

Additionally, Hall alleges that on Sept. 30, 2019, Offensive Coordinator Custavious Patterson, who has recently announced his own departure from the Bates football program, told Hall that campus safety officers tried to enter his home at 2:00 a.m., “claiming they had received reports of a woman screaming from inside the house.”

The Student found information in the Office of Campus Safety’s crime log from Sept. 28, 2019, of “suspicious conditions: undesirable person(s)” at around midnight at 84 Bardwell St., but could not confirm whether that was the complaint Patterson was referring to.

Hall told Douglas Morency, who was at the time the director of campus safety, about the incident and was told “he would investigate the matter,” though Morency soon left the college.

Morency spoke to The Student and stated that on the Sept. 28, 2019, a Saturday evening, a female student called Campus Safety to report a suspicious person following her, wearing khaki pants and a Bates sweatshirt. She stated, according to Morency, that she would be at 84 Bardwell St. if someone from the office needed to follow up.

The dispatched campus safety officer, Morency told The Student, was new to the college and the area, and accidentally went to 84 Nichols St., which is located one street over. It happened to be where Patterson was residing, Morency said.

“He misunderstood the thing that was going on,” Morency claimed.

The officer knocked on Patterson’s door and inquired about the woman, who they believed lived there. Morency claims he followed up with both Patterson and Hall about the incident and cleared things up. He called the claims shared with him by The Student “embellished.”

According to the complaint, Hall claims that on Dec. 10, 2019, Patterson was informed by Lexow that Hall had been accused of “soliciting college students to have sex with football players whom he and Coach Hall had recruited to Bates.”

The complaint states that “the allegations against Coach Hall and Coach Patterson were and are untrue and drew upon centuries of negative tropes surrounding Black men and their attempts to exist in white communities.”

Hall alleges that when Bates welcomed potential football recruits of color to campus, the tours were done by the Office of Intercultural Education (OIE) and that the two coaches had nothing to do with where the recruits were placed.

According to the complaint, an employee at the OIE was in charge of the process. The complaint claimed that “shortly after these false and racially charged allegations of sexual impropriety were made,” she left the college.

Starting in the spring of 2020, the complaint alleges, Hall claims that he “began to experience consistent and unexplained resistance from Bates in fulfilling his job responsibilities,” which he says included a lack of transparency regarding his employment contract and the possibility of a contract extension.

He alleges that the college refused to fulfill multiple requests to create fundraising and recruiting content, as well as continuously avoided conversations about his contract. According to the complaint, Hall claims that he had multiple meetings with members of the administration in 2021 — on Feb. 4, Feb. 14, April 4 and May 11 — all of which were unsuccessful.

In these meetings, according to the complaint, Hall continually asked about renewing and negotiating a new contract and was “rebuffed” by the college.

It is unclear whether the college’s contract negotiation style extended to other coaches or if it just affected Hall. In his complaint, Hall claims that the college initially postponed contract discussions because of the COVID-19 pandemic, but as summer 2021 neared, he still received little to no communication from his superiors regarding his continued employment.

The complaint requests that Hall receive a trial by jury. Additionally, he seeks declaratory and injunctive relief, meaning the facts of the case should be determined before making a decision on damages. He is also seeking an order requiring Bates to employ him at his former position, equitable relief for back pay and benefits, and compensatory, nominative, punitive and civil damages.

In his complaint, Hall alleges that he, the first Black head coach in the college’s history, was hired “in an apparent attempt to address its tortured and well-documented record of institutional racism.”

The complaint also claims that “immediately after he accepted the position…the college abandoned any pretense that it intended to treat Coach Hall fairly and respectfully, and instead subjected him to repeated and severe racial discrimination.”

This is a developing, breaking news story and will be updated when The Student receives statements from those mentioned in the piece. Ellie Wolfe can be reached at [email protected].