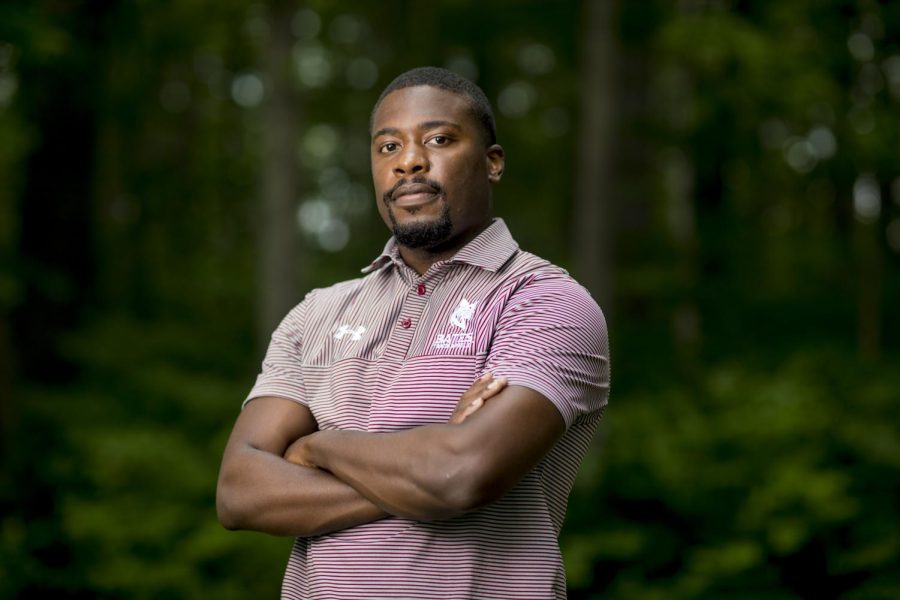 First-year men’s track and field Head Coach Curtis Johnson knows that transitions take time. After 27 years of Al “Fresh” Fereshetian and 43 years from the legendary Walter Slovenski before him, the athletic department passed the baton to Johnson. Previously, Johnson served as the Assistant Coach under Fereshetian. He has rather large shoes to fill, but is eager to lead the ‘Cats in this upcoming outdoor season and beyond.

“I absolutely love it,” Johnson said. “I take a lot of pride in [this opportunity]. You know, it pumps me up, [but] this head coaching role is not easy, especially if you want to do it right.”

Athletic Director Jason Fein said that he was “excited” to be able to promote Johnson to this role, and that Johnson’s quality was evident during his run as an assistant coach.

“He had really proven himself as not only a really good track coach, but also as a really important member of the Bates community, taking on some other roles as well,” Fein said.

Fein added that Johnson’s commitment to the Bates student body and community is apparent in everything that he does. During the 2020-2021 academic year, Johnson worked with the Office of Intercultural Education and “helped tie the athletic department and the OIE together,” according to Fein.

“[He shows a] heavy emphasis on student-athlete development in all facets, not just in their sport,” Fein explained. “Curtis is a person who clearly cares about the overall development of our students, and their social, emotional, mental well-being, aside from their development as track athletes.”

Johnson ran track at the American International College from 2012 to 2014, where he was a seven-time NCAA Division II national qualifier and a three-time All-American. There, his competitive and focused nature helped him blossom into the coach he is today.

“I was like, ‘Okay, wherever I go, I want to be competitive,’” Johnson said. “And it was a very challenging and rewarding experience. I appreciate, you know, the way my college coach stuck with me and made sure I kind of kept focused on my goals.”

After that, Johnson earned a master’s degree in public administration from the University of New Haven before being hired as an assistant track coach at Bates in 2016.

Under Fereshetian, Johnson worked mostly with the sprinters and hurdlers, but the general wisdom that he gained from “Fresh” was invaluable, including the mentality of consistency that the long-time head coach brought to the role.

“You know, the things he wanted to accomplish, the messages he tried to instill in our student athletes, it was consistent from season to season,” Johnson said. “So, five, five and a half years working under him, I got to see somebody that consistently pushed our team and instilled a really good tone for, you know, growing as an adult.”

Likewise, the first-year head coach said that he’s had to push himself in order to understand situations from the broader perspective of the team as a collective.

“I’m learning exactly how passionate he was because he was a unique coach in what he did and so I also think I’m very unique, so I’m excited to see how I can make sure I’m a coach for everyone,” Johnson said. “Which says a lot when you’ve got a roster of 60 or so, so there are many things [to focus on]. Different event groups and different mindsets, but there’s a fire you need to bring for each one.”

Along with uniting the team as a whole, Johnson wants to make sure that he is connecting with each of his athletes on a personal level, and not just on the track.

“I want to help them know, I’m a part of the experience. I don’t say, ‘I don’t care how your day was, it’s time to practice.’ I also want to hear how your day was,” Johnson explained. “And yes, it’s nice to tuck your day away for practice, of course, but that’s hard to do. You know, the student, the student life never turns off on campus, and neither does a coach’s life.”

With that, the head coach wants to evolve with the student body as it moves forward and changes, and preaches striking a strong work-social-athletic balance.

“[Part of it means] evolving with what’s happening around me as the day to day mindset of a student athlete changes, and being able to acknowledge how to meet our student athletes halfway is something that is important to me,” he said. “I also believe in balance, I encourage them to have fun and I want them to do the modeling shows, I want them to be excited about trying to do an honors thesis, and know that they can still be just as successful here.”

Ultimately, for Johnson, part of being a student-athlete on the track team is being very intentional about everything that you do. He calls this the “championship lifestyle,” and said that he encourages his team to act the part of a “champion” all the time, and not just during practice or at a meet.

“It’s not just about how far you can throw, or how fast you can run,” he said. “It’s about whether you have this championship character, regardless of the time of day. This is a wholesome experience, this is not just a sport, you know, this is all about making sure that you have the same characteristics wherever you are, in your day, you know, whether it’s a class, or it’s a social event or something.”

Johnson explained that resilience, perseverance and consistency are key to winning.

“You’ve got to be able to say, ‘Man, I did not do well on that quiz, but it’s okay, I’m going to office hours, I’m gonna make sure that next one is even better.’ That’s huge,” Johnson said. “It can make or break the culture. It can be the difference between people waking up on a Sunday to do something like a nice breakfast and recovery session and just sleeping in late and then trying to get in as much as you can in the afternoon.”

He added that “every single day, I make sure that I carry myself in a way that reflects the fact that I am a Black man, and it’s not just about am I the only Black man, it’s about what kind of Black man am I?”

Furthermore, Johnson hopes that the school’s athletic staff can be more representative of its student body in the future. In order to do so, he believes that Bates needs to continue to “build relationships” with prospective Black coaches.

Fein reiterated Johnson’s sentiment and added that while Bates “has fallen short [in this regard] in the past,” they need to “be really intentional in the hiring process.”

“I think something that happens far too often at a [predominantly white institution] like the NESCAC is that they look to other coaches they know from other institutions like them,” he said. “We have to be more intentional in going out and making our coaching staff more representative of our student body … Part of my role on the NCAA Diversity and Inclusion group was creating a diverse hiring guide, and it included things like partnering with other conferences who aren’t like ours, just to make sure we’re creating opportunities for minority coaches in assistant and head coaching roles.”

Ultimately, for Johnson, being a head coach at Bates is all about embracing the community and being a positive role model for his team. He knows that if his squad wants to win, they’ll have to hold themselves to high standards, both on and off the track.

“Who do we want to be for our campus in [these] final two months?” he said. “And not just for your team, the performances and the relationships you make on our roster, but who you are when you are walking around campus and meeting new people?”

As the men’s track and field team opens their season, Johnson hopes that they are ready to show the rest of the conference — and potentially nation — their best selves.

“This comes full circle,” he said. “So I guess I’m being consistent, but it goes back to that championship character — are we going to have that character way before we get to NESCACs or just wake up and hope it’s going to be there?”