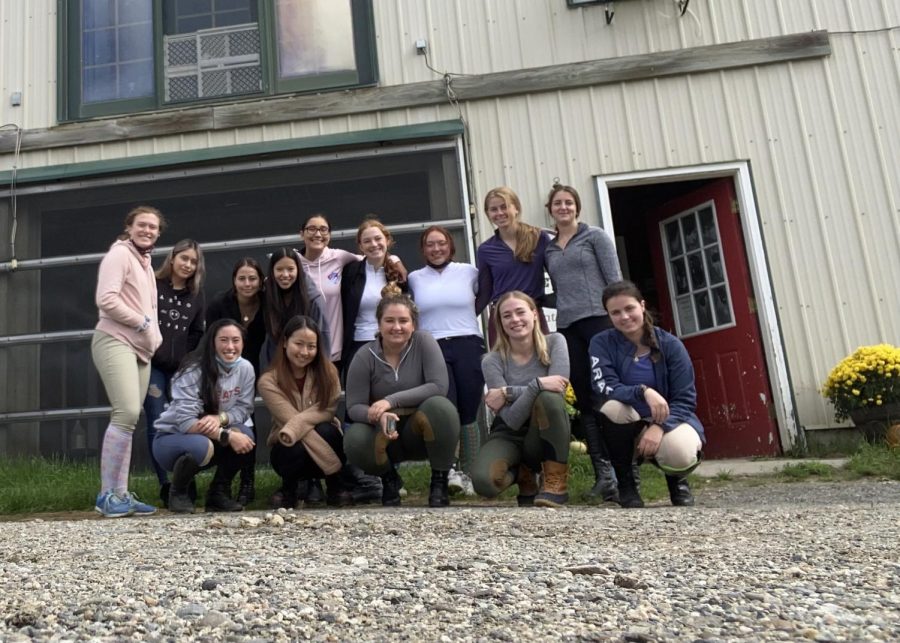 The Bates Equestrian team might be one of the lesser-known club sports on campus. With just 11 members, the club is mostly comprised of underclassmen. Still, team members Kerry Ettinger ‘23 and Hannah Braslau ’23 are confident that the team is on the come up. The Bates Student met with the two to discuss the club sport’s history and its bright future.

Ettinger started riding when she was just eight years old, and Braslau started when she was five. Attending schools with equestrian teams was a goal for both when applying to colleges. “I looked for schools that had both rowing and equestrian [teams], just to keep my options open. I didn’t know if I was going to join either, but at least I had that choice!” said Ettinger, when asked about how she came to know about the Bates Equestrian Team. Both Ettinger and Braslau have been members of the team since their first year at Bates.

Both are also members of the Bates Women’s Rowing team. When asked about balancing life, school, riding and rowing, Braslau laughed, saying, “It definitely takes a lot of planning my life out, but it works.”

The Bates Equestrian team trains in Readfield, Maine, which is about forty minutes away from campus. “[The team] has been around for a while, but it goes through fluctuations in membership depending on who rides and who wants to take over leadership,” Braslau noted.

Members are encouraged, but not required to compete. The Bates team competes against other local colleges. The team has only just started competing for the spring and will continue to compete in the fall of 2022. The team competes in equitation, which is simply how a rider looks and performs on a horse. “It’s different than what a lot of people grow up doing if they haven’t been on the hunter/jumper circuit before,” Braslau said. Still, both Ettinger and Braslau noted that their coach has been great at helping people adjust to this style of competing.

With COVID-19 and the individuality of the sport, the team is not as close-knit as Ettinger and Braslau would like. The team also recently switched training facilities, disrupting their competition season. These are just a few reasons why recruitment and retention have been difficult. If the team grows, team members will also be able to compete more, especially during the fall. “We’d like to recruit some more [members]. Obviously, it’s not the most successful sport considering you have to drive, get the equipment and pay for lessons…” Ettinger pointed out. The team hopes that with more relaxed COVID-19 regulations, both bonding and recruitment will become a priority.