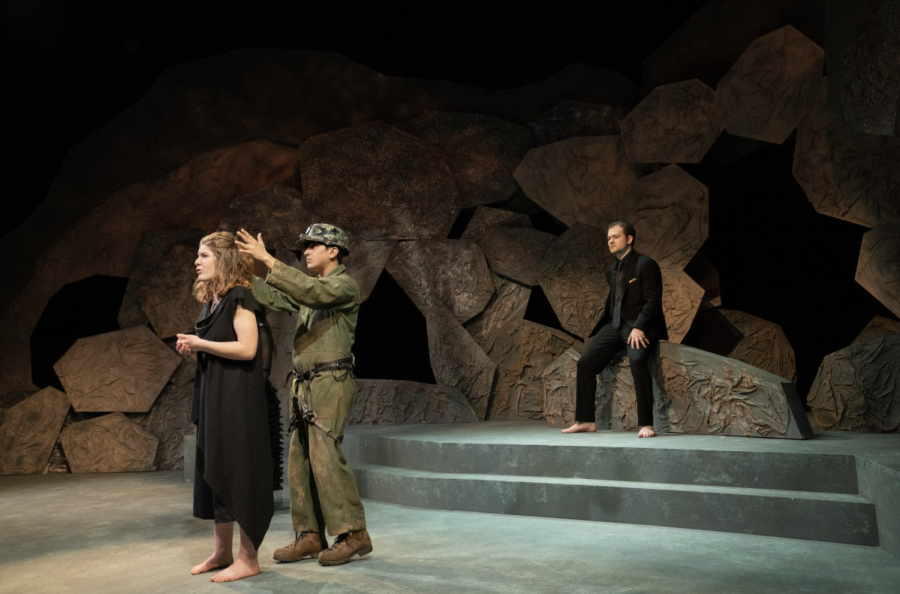 Whenever a theater company decides to stage an old play—such as Anne Carson’s “Antigonick,” a translation of “Antigone,” written by Sophacles in 441 B.C.E.—there is a present and potent question about relevance. Can something that was written over 2,000 years ago really tell us anything about contemporary context? Does the theater company think it can? Are they trying to talk about our modern times?

Luckily, that question was not a problem for Bates’s production of “Antigonick,” which ran March 17 through March 21 in Gannett Theater. After all, it is not difficult to question whether a play is supposed to be interpreted as relevant to 2022 when one of the play’s characters performs a rapid antigen COVID-19 test onstage.

That character is “Nick,” the most defiant change from Carson’s postmodern “radical translation” of Sophacles’s “Antigone,” and the most haunting character, despite being the only one who is not an ancient Grecian ghost. Nick is a silent audience surrogate of sorts—the lone modern COVID-19 tester, sharing the stage with ancient characters, and attempting to take stock of the story alongside the audience. The script specifies only that Nick “measures things” (in Bates’s production, very literally, with a touchless thermometer and a meterstick and a watch, and also metaphorically, at times, lending “measured” calm to emotional scenes).

Nick’s silent attempts to quantify the story of people and a culture that are long-dead reminded me of a man watching a ghostly haunting repeat night after night, powerlessly watching a tragedy whose ending is prewritten. He is the only actor not dressed head-to-toe in black, the lone character with his humanity left alive, his story not having been exploited onstage for centuries.

The characters are upfront about that exploitation. Protagonist Antigone and her sister Ismene bicker about the differing interpretations of directors Samuel Beckett’s and George Wilhelm Friedrich Hegel’s versions of the original myth.

The deliberately-uncomfortable collision of the modern context and ancient story is brought forth in other ways, too. Thebes’s king, Kreon, struts across the stage like a game-show host, complete with a microphone and theme song. References are made to contemporary literature to illuminate its ancient counterpart. Eurydike mentions that “poor Mrs. Ramsey died in a bracket of ‘To The Lighthouse’” to underscore how female lives (and deaths) are often overlooked.

The play is imbued with a touch of meta humor, and there is a constant pulse of energy in the intersection of ancient mythology and contemporary commentary.

Nick, played by Kush Sharma ‘23, is Carson’s most defiant answer to that question of relevance. Yet, even without him, the modern implications are clear. “Antigonick” (and “Antigone”) center around a young woman, Antigone, played by the stellar Caroline Cassell ‘24. She is the daughter of Oidipous (yes, that Oidipous), and when the play begins, she has just watched her brothers Polyneikes and Eteokles slaughter each other for a claim to the throne.

The current Theban king, her uncle Kreon played by Jacob DiMartini ‘22, has forbidden the burying of the body of Polyneikes since the traitor deserves to be dishonored. But Antigone buries the body anyway. (If Polyneikes remains unburied, he will not be able to reach the afterlife and the gods will be angry at her family.) Because of this, Antigone is sentenced to death—to be sealed in a cave and starved—for what she describes as obeying the gods’ law.

Orbiting around the central conflict are Antigone’s more fearful and exhausted sister Ismene played by Quinn Simmons ‘24, Antigone’s fiancé Haimon played by Miguel Pacheco Gonzales ‘24, the Boy who guides the prophet Teiresias played by Joaquin Torres ‘25 and Kreon’s wife, Queen Eurydike, played by Sydney Childs ‘24. Rounding out the cast are QinYing Zuo ‘22, Bora Lugunda ‘25, and Ananya Rao ‘25 as the chorus of Theban men, who begin the play burdened by enormous hulking masks, gradually shedding their looming personas, and Manuel Machorro Gomez Pezuela ‘25 as the Messenger.

The cast of “Antigonick” is one of the strongest I have witnessed at Bates. Every actor shines. The actors knew the material well but did not appear over-rehearsed. They clearly understood the complexities of the story, and were all good physical movers. Several of them—most notably Pacheco Gonzales as the Guard and Torres as Teiresias—managed to wring humor from lines that I didn’t expect to find funny.

Standouts include Cassell as Antigone, with the ferocity of raw emotion that the role demands, Lugunda, with a forceful and clear voice and an understanding of the complexities of the chorus’ dual complicity and moralizing, and Pacheco Gonzales, who brings grief to his role as Haimon and welcomes comic relief in his portrayal of the guard.

Another notable performance is that of Childs, who shines particularly in her pre-show role as an academic scholar delivering a monologue called “The Task of the Translator,” which lays out some of the questions that will shape the play.

Those still potent questions include inquiries about authority, power, agency, loyalty, duty and family, yet many of them are left unanswered as they are in the murky world. The cave themed set speaks to this idea of living in the realm of uncertainty. While Nick dressed as a spelunker is probing the cave’s secrets, Antigone, of course, is sentenced to starve to death within the cave’s walls. The meaning is clear: this is a play set in purgatory, teetering on the edge of death.

The actors take advantage of the physical set, often flitting in and out in white masks and peering at the action on stage through crevices in the rocks. This adds well to the ghostly aura. The credit for the good usage of the set goes to guest artist and professional scenic designer Marie Laster and movement director Professor of Dance Carol Dilley. Their combined efforts meld the stage and the actors seamlessly.

The staging was supplemented by some excellent puppeteering work, courtesy of affiliate artist John Farrell, including a topsy-turvy opening montage of the shadowy battle of Eteokles and Polyneikes projected onto a sheet.

The uneasy, ever-shifting battle of Eteokles and Polyneikes was indicative of the moral murkiness of the larger show—the question of who stabbed who first. But does it even matter? In the play, many of these questions go unanswered, and that is for the best.

Initially, the play was not described with a statement, but instead with a question: “what happens when we are denied the ability to grieve?” The many ways that this question is both answered and left achingly open lends a painful and poignant heartbeat to the production.