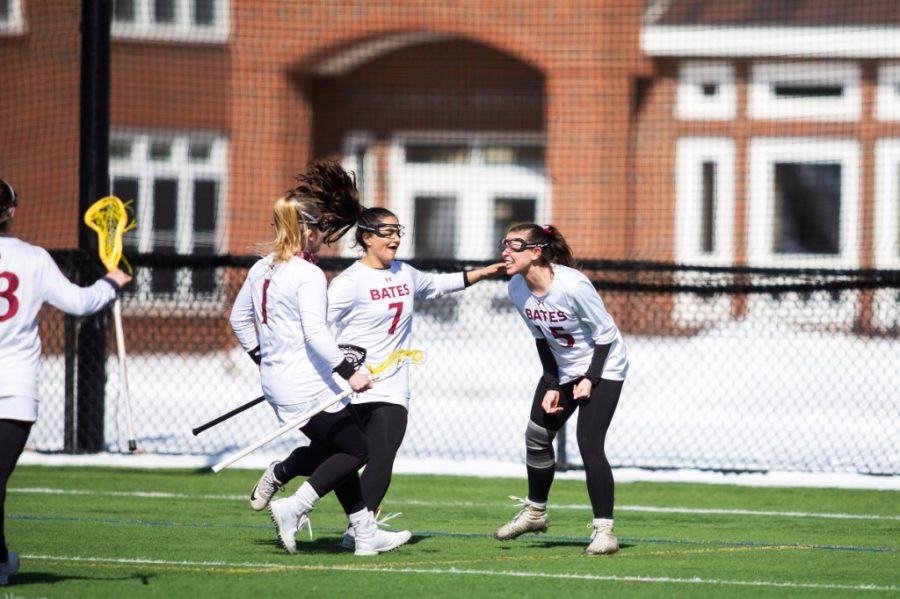 The women’s lacrosse team hopes to find some success this season, especially against their NESCAC rivals.

Though just in her first season as the head coach of the women’s lacrosse team, Renee Olsen speaks as though she’s been around the team for 10. Perhaps, after two shortened seasons due to the COVID-19 pandemic, the excitement around having a full season has created a renewed synergy around the locker room. Regardless, Olsen knows that the team is ready to conquer a tough schedule featuring the likes of nationally-ranked teams, including Middlebury at No. 6 and Tufts at No. 8.

Women’s lacrosse, which is captained by seniors Anna Reaman and Dana Swartz, have started the season 1-2 after a win against Southern Maine University and losses against the nationally-ranked University of Chicago and NESCAC rival Trinity College.

Teams in the NESCAC have historically been very competitive in the NCAA Tournament, as the conference boasts the most championship appearances since the event’s inception in 1985. Unfortunately, Bates has typically not been one of those programs.

“Every game you play each weekend is a really hard game,” Olsen said about the team’s schedule. “So, it’s about bouncing back from a really physical game and then asking yourself how you can prepare for the upcoming one.”

Despite having obstacles in the way, Olsen wants to make sure that her team plays with intensity on both sides of the ball. She admitted that while the offense is “still working through some things,” the defense is “scrappy and aggressive.”

“We really like to push the pace and force turnovers,” she said.

In a year that seems familiar for some and brand-new for others, defender Reaman said that the uniqueness of this season has the team both “excited and nervous.”

“This year, we have 26 of us who’ve never played against those schools, and only four of us who have, so they have no idea what to expect, which makes them super nervous because this is the first time they’re playing at a super high level,” Reaman said. “But they’re also super excited because it’s a double-sided coin, and they have no idea what to expect, so they just want to go out there and play good lacrosse.”

The captain said that the school’s COVID-19 policies created some difficulties in terms of getting the whole team together on the practice field last year.

“Even being outside together or inside on the turf with masks has been such a blessing. We’re all so fortunate to have this opportunity back in our hands again,” Reaman added.

Reaman said that Olsen, who brings coaching experience from Colby and Elon University, has been “awesome” and instrumental in bringing the team together, and that the combination of her knowledge and personality is exactly what the team needs at this stage of their development.

“We don’t really have anything [because of COVID-19] and are starting from scratch, so getting a new coach [now] is the perfect time for that,” Reaman explained. “She’s done a great job of jumping in and making everyone feel super excited and getting the fire back in everyone. Like, ‘Alright, here we go, it’s time for the season,’ and she’s just as bought-in as everyone else on the team.”

In a year where college sports are starting to reset themselves back to pre-pandemic times, Reaman wants the team to come out with the freshness of an upstart program looking to prove themselves to the rest of the conference.

“It’s kind of a bit of a surprise in the sense that we could go out there and anything could happen. We’re like, ‘Hey, we’re Bates and we’re gonna go out there and absolutely crush teams,’ so I’m excited because we definitely have the ability to,” she explained.

“I go into every game expecting to win, and so making sure my team feels that as well is important because we really want to develop a championship-winning mindset,” said Olsen. She concluded by saying, “So, [we’re] going into every game, having that expectation of winning, knowing that we can win, and ultimately leaving it all out on the field.”