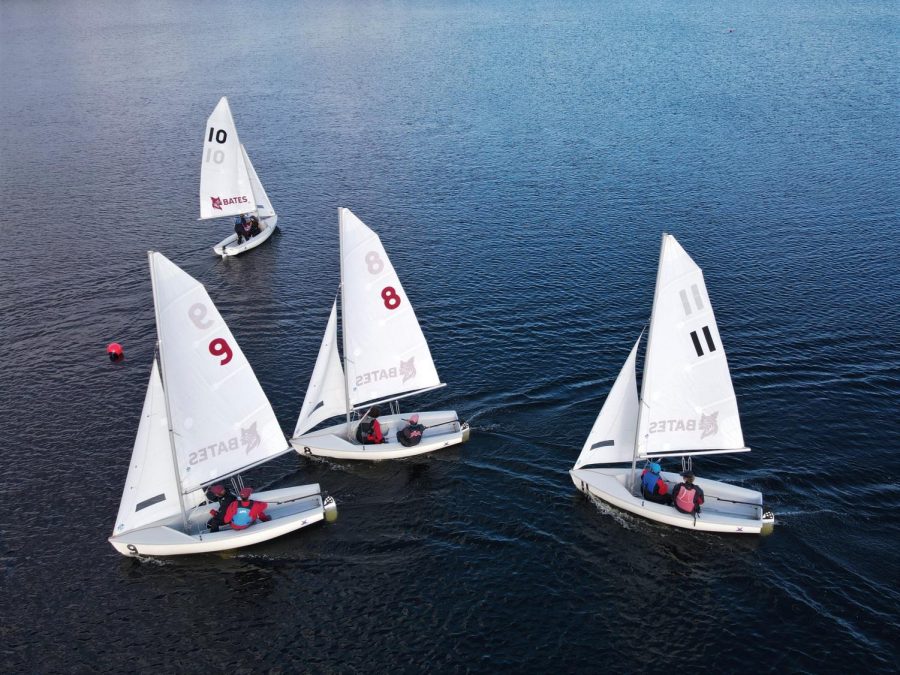 The regatta will take place at Salve Regina University in Rhode Island on April 30 and May 1.

The Bates club sailing team has always considered themselves a little bit scrappy, Ted Lutton ‘24 told me when we sat down to talk about their upcoming spring season.

While other club sports normally compete against non-varsity teams across New England, the sailing program has to race next to varsity programs who often come with paid head coaches and budgets that engulf what the Bobcats spend.

That’s why the Bates team, which holds the No. 10 national ranking in the student-led teams division program, decided to work toward creating the first-ever National Championship for student-led teams.

On the weekend of April 30, the team will co-host the opening National Invitation for club sailing programs. The event will take place at Salve Regina University in Newport, Rhode Island, and is run by Bates, the University of New Hampshire (UNH) and the Massachusetts Maritime Academy.

The idea was first pitched by the teams to their conference commissioner in October of 2021, said Jack Valentino ‘22.

“We kind of worked through the logistics of it, and then created proposals and had countless Zoom meetings with all these stakeholders of students, coaches and sponsors to put together a proposal packet,” he said. “It was created to give student-led teams an opportunity to shine against varsity teams.”

Lutton believes it was the culture of the Bates team that helped bring the championship into reality.

“There’s kind of this scrappy, loophole-finding culture because we are an outsider with not as many resources as the teams we’re sailing against,” Lutton said. “So we have to get creative to be competitive. We made our own championship.”

The Bates Athletics Department currently gives the club sailing team a budget of $5,000 per year, which pales in comparison to the funds that varsity teams use to operate. Their budgets, especially at Ivy League schools, often surpass $100,000, Lutton said.

“In a lot of ways, we’re not really on equal footing to a lot of the teams we’re practicing or competing against,” he explained. “We thought that this club team nationals would give teams like Bates and UNH and other student-run, more regional programs something to look forward to that’s actually an achievable goal.”

The championship is organized so that each of the five conferences gets proportional representation in terms of who they send to the competition.

“It’s going to be the top 18 student-led teams from around the country equally distributed,” Valentino said. While the teams are responsible for their own housing and food, Bates, UNH and the Massachusetts Maritime Academy are in charge of the facility and maintenance, noted Ethan Baker ‘24.

“We need to make sure that the fleet of boats that we’re using is upscale, ready to go and that we have backup stuff ready,” he said. “We have to coordinate to support folks at the race.”

The preparation alone has been a difficult and time-consuming task. Each team put together a committee to help run the event, and members of each committee have counterparts they can work with directly at the other two schools.

“It was probably like 10 hours a week of just meeting with people and refining the proposal, settling on a location and figuring out the logistics,” Valentino said. “Right now it won’t be too much of a time commitment until the actual event.”

The Bates sailing team is getting no financial or logistical support from the Athletics Department for this national championship, meaning members of the team have had to commit a lot of time and effort to create the event.

“Club team nationals is similar to everything else that we do as a club team,” Lutton said. “It takes a lot of time and investment from student leaders to put up something of this scale.”

It’s hard for the sailing team to even practice for the event, given they have had to wait for the ice to melt on Taylor Pond, where they practice, Valentino said.

“We can’t get in the water until the ice thaws, which is probably early April,” he said. “The way we structured our schedule this spring is that we’re sending the team that’s going to nationals to a bunch of other high level events in our conference to prepare.”

Lutton believes the team culture, which he described as “a lot of fun,” helped create an environment where they could commit a lot of time and effort to the championship. Valentino agreed, and mentioned how much math and logistical work have to be done to finalize the team’s schedule and practice times.

“We can’t afford, as a student-led team, to be sending people to useless events,” he said. “We don’t have the bandwidth to have an unimportant event on our schedule. Every event that we register for has a very demonstrable purpose.”

Before the COVID-19 pandemic, the team was focused on finding enough sailors to compete in a regatta. Now, they have over 50 people on their roster. Lutton believes the diversification of what the team offers has impacted their growth.

“It’s a community where lots of people feel welcome, whether they’re really interested in running a national event and doing really competitive stuff or if they just want to go sailing once a week and be part of a fun group of people,” he said.

While the team is looking forward to co-hosting the first-ever National Club Championships, they are also eagerly awaiting to further build their team culture.

“This sounds kind of corny, but you’re more friends than you are teammates,” Baker said. “You can always go to team dinner on Thursday nights and you’ll have people that know what’s going on in your life.”