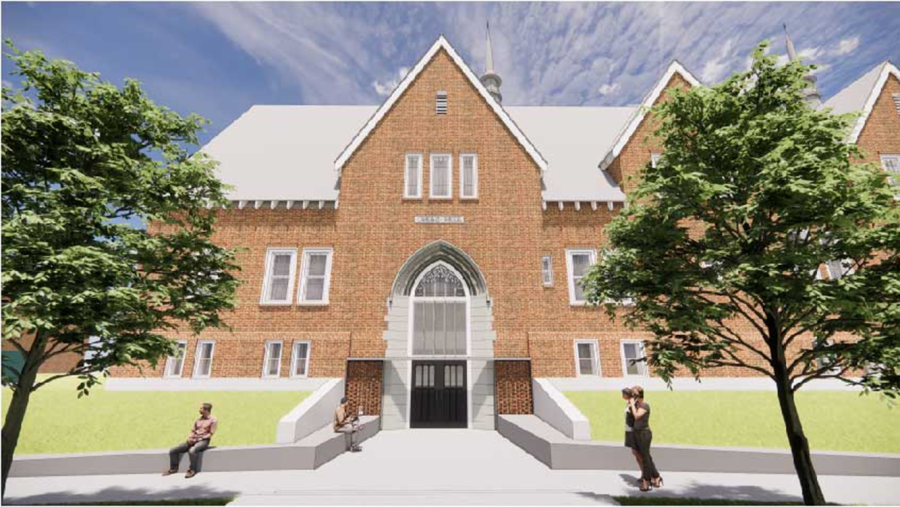 Pictured above is the artist’s rendering of the Campus Avenue entrance of Chase Hall.

For 102 years, Chase Hall — once the hub of campus — has served a multitude of purposes at Bates, including as the former dining hall and as the current center for student services. Now, starting in May of this year, Chase Hall is to undergo yet another renovation and is scheduled to be reopened at the start of the 2023-2024 academic year.

The focus of the renovation is to improve Chase’s accessibility and visibility within the building.

“We have a lot of student services that right now are disparate, and we have some functions in the building that don’t have great visibility. By investing in portions of the building, we can tie all those things together and improve accessibility and make it easier to navigate the building … It’s an important investment in the college,” Vice President for Finance and Administration and Treasurer Geoffrey Swift told The Student.

According to Pam Wichroski, the director of capital planning and construction at Bates and also a licensed architect, the renovations to Chase have been in the works since 2010 when the Campus Facilities Master Plan identified Chase and new student housing as key plan drivers. In 2016, the new vision of Chase surfaced again when the college began working with Ann Beha Architects for the construction of Kalperis, Post & Print and the College Store. It wasn’t until 2018 when the college partnered with Canal 5 Studios for the programming and design of Chase.

In 2014, both Ann Beha Architects and Canal 5 Studios completed previous renovations to Chase Hall — the renovations to the Office of Intercultural Education (OIE) and the Bobcat Den.

The renovations of the building were put on hold until the spring of 2021 while the college fundraised for the project, as they were relying entirely on gifts at the time.

The major changes include:

Improving the accessibility of Chase’s front entrance (Campus Ave.). Instead of taking a set of stairs to the first floor level, a ramp will now descend to the ground floor level.
A new convenience stair and lift will be added, which will provide access to all levels in the building. This will also increase the visibility and the accessibility of the OIE.
The reconfiguring of office spaces, including Campus Life, Community Standards as well as Residential Life and Health Education, which will be moved to the ground floor. The Center for Purposeful Work will be moved from 146 Wood St. to the second floor of Chase.
New collaborative student and club spaces complete with meeting rooms with Zoom capabilities.
Fully ADA accessible, single-user restrooms will be added to the ground floor. A bank of restrooms has also been designed outside of Memorial Commons. Although intended to be single-use, the Lewiston City plumbing codes require that the restrooms be identified as male or female. However, Wichroski explained that once the plumbing codes catch up, a dividing wall between the men’s and women’s restrooms can be lifted to create a nonnominal, multi-fixture restroom.

Developing the design of the renovations didn’t come without challenges. With eight different floor levels and nine additions since its initial construction, the building is a difficult one to make navigable.

“While we’re renovating a number parts of the building and not touching other parts,” Swift said in reference to the renovations of the Den and the OIE, “the parts that we’re not touching [will] be improved by the visibility, the circulation, and the access [to] them.”

Due to the significant amount of construction that has to occur on the exterior of the building, construction fencing will be wrapped around the Campus Ave. and the Franklin Walk (between Chase and Muskie Archives) sides of the building. The pedestrian walkway will be limited to the Carnegie Science Hall side of Chase. The crosswalk between Kalperis and Chase will also be cut off, but the cross-walk by Bonney Science Center will remain open.

During the year in which the renovations will take place, offices and student spaces currently located in Chase Hall will be moved to 96 Campus Ave., the building the college purchased from St. Mary’s in September 2021. First a convent and later an office space for a number of years, the building was used this winter semester for COVID-19 isolation housing during the outbreak in February, but that was never its intended purpose.

When the college was figuring out the logistics of where they would place offices and student spaces during the renovation, they heard from St. Mary’s who inquired whether the college would be interested in purchasing the building. “The sale was somewhat serendipitous and it kind of came together in a great way that a building that was functionally built as an office, but not currently occupied by offices, created this kind of swing space,” Swift explained.

Once the transaction on 96 Campus Ave. went through in the fall, Bates began to recondition the building to make it suitable for the offices and student club spaces that would be moving there. However, on Dec. 30 the college decided to convert the building into isolation housing in light of the rise of the omicron variant and the impact that winter break travels could have on case numbers. Now, as COVID-19 numbers on campus have dramatically lowered, contractors have reentered the building to get it ready for the move from Chase to 96 Campus Ave.

When asked about the importance of renovating Chase, Swift commented, “Chase is an important, historical building for the Bates campus. It’s a building that looms large in many memories of graduates from the college.” For the students, faculty and staff on campus in the fall of 2023, the Chase Hall renovations will hopefully allow the building to continue to reside in the memories of graduates to come.