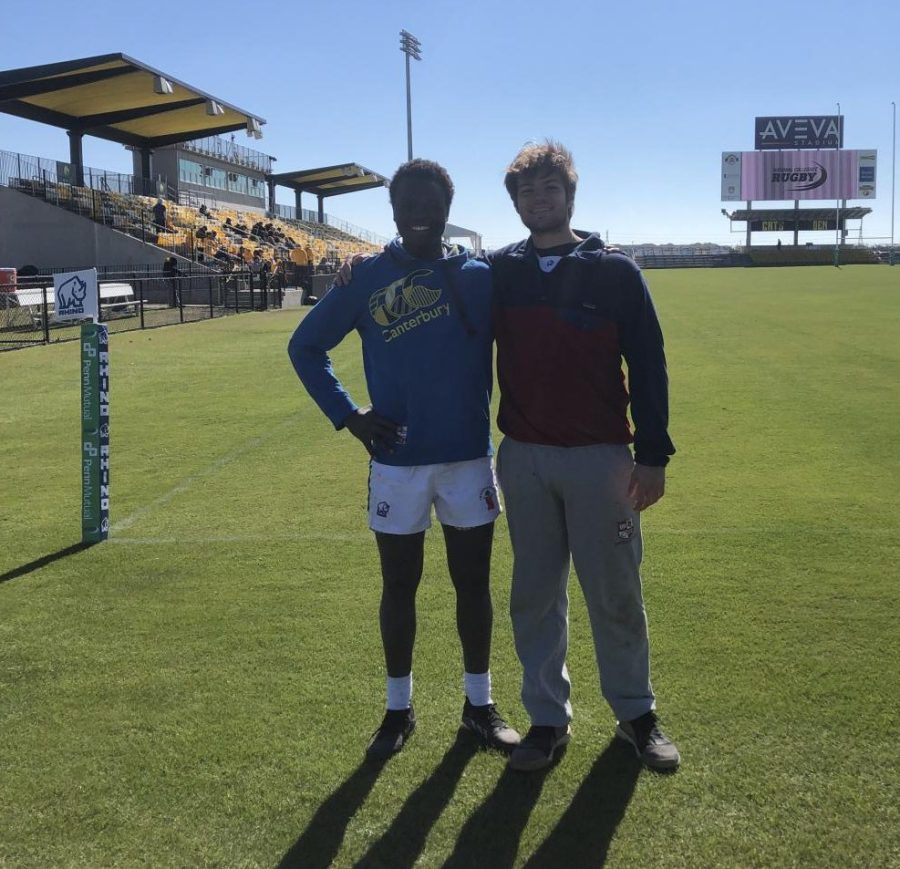 Spencer Obiero ‘25 and Tom Linkas ‘22, who both play important roles on the men’s rugby team at Bates, were invited to compete in an All-Star tournament in Houston.

While everyone was avoiding the winter storms this past January, Bates rugby players Spencer Obiero ‘25 and Tom Linkas ‘22 were traveling to sunny Houston to compete in the National Collegiate Rugby’s All-Star Shield Challenge. The competition, which took place from Jan. 15-16, featured eight regional All-Star teams from across the country.

As explained on the National Collegiate Rugby website, “this unique All-Star event includes the best players from across all men’s divisions, including Division I, Division II, and Small College. Over 300 players, representing 100 schools, were selected based on regional tryouts and coach nominations.” In addition, five Rising Star teams selected from over 40 schools compete for a championship of their own.

“It was one happy moment,” Spencer Obiero ‘25 reflected on realizing he was selected. “I was quite nervous because players came from leagues that were above the one that Bates takes part in and I thought I had little chance to be selected.”

Captain Tom Linkas ‘22 was in the same boat. Obiero added that Linkas “was also waiting for the selection result and we would text each other every time asking whether we had gotten in. After a long wait I decided to stop checking my email until Tom texted me that the list was out and that both of us were selected.”

Obiero made the All-Star New England White team, while Linkas was named to the Rising Star New England Blue team. Upon being selected, Obiero said he “shared the news with my teammates, coach Mike Milliken, my host family the Seltzers and my family back in Kenya.”

Despite having never played with the other people on his team, Obiero found it easy to adjust.

“I sort of understood how most players reacted by the time we were having our second game,” he observed. Obiero’s team, New England White, was ranked third in their pool after the first day. They proceeded to the quarter-finals, but lost to the Pacific Coast team by one try.

“My best memory was from the last game we had on the first day,” Obiero said. “I got in a few minutes into the second half and it felt like we had a strong chemistry in our team. By then I think we all had understood the strengths of each other and that’s what we tried to optimize. We lost the game but I had plenty of fun in it.”

“It felt like we’d been playing together for years,” Linkas echoed. His team, New England Blue, placed second in their bracket. He attributed this to their team not playing at full strength: “Had it not been for some unfortunate injuries to our forward pack, I think we had a chance [to win].”

For Linkas, the best thing about rugby is “the strength of the bond formed between teammates through the trials and challenges of a match.” During the tournament, the strength of this bond was in full force. Linkas was even able to “catch up” with an old teammate from middle school, one of his favorite memories from the weekend.

“There were so many good times on and off the field,” said Linkas, for whom another highlight was drinking 120 beers with his team in under 10 minutes at the end of the tournament. “My biggest takeaway [from the tournament] will be the friends I made on the Blue team,” he added. “Three days and four games of rugby is all you need to form an everlasting friendship.”

This bond is something that Obiero, who joined the Bates Rugby team as a first year this fall, can attest to as well. “I was welcomed into the club and I dived in,” he said. “My best friends are in the Bates rugby team and we usually have a good time together both on and off the pitch.”