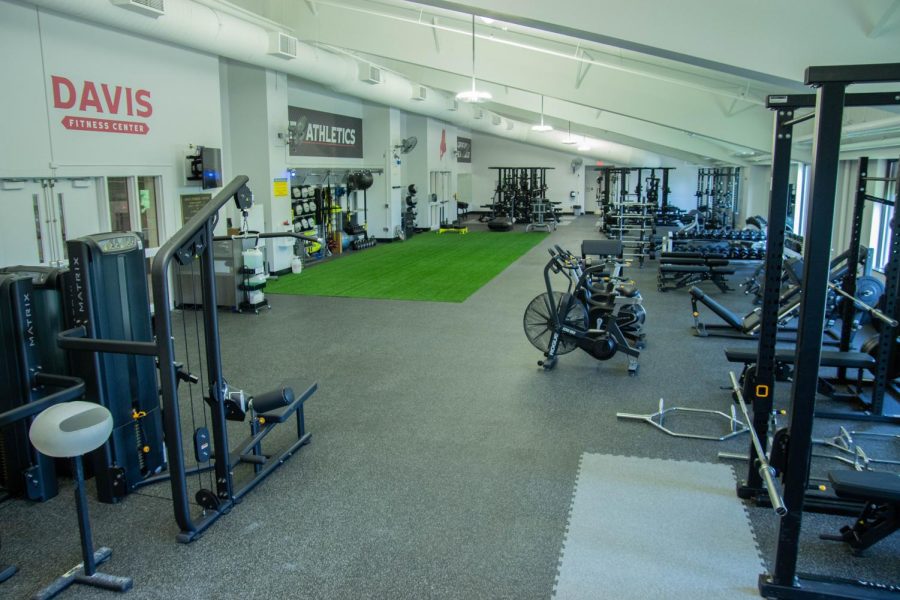 Some of the student workers in athletic facilities on campus have trouble enforcing the rules, especially to their peers.

Editor’s Note: This article was written before the newest COVID-19 guidelines were released.

Students on varsity teams and people who enjoy casual workouts alike have complained about various COVID-19 inspired restrictions enforced while exercising in athletic facilities. These restrictions, which include masking up while working out, have to be enforced by gym goer’s peers: student workers hired by the athletic department.

While all the workers that spoke to The Student stated they enjoyed the majority of their responsibilities, each mentioned having difficulties enforcing rules and policies to their peers. It can be hard, many explained, to have to ask their classmates to remain fully clothed, masked and to leave the gym on time.

Spencer Obiero ‘25 is a facility operations attendant who has been working for the Athletic Department since this fall. His responsibilities include monitoring facility access control and security, performing equipment check out processes, assisting with laundry services and enforcing gym-wide policies.

Though Obiero said that he normally doesn’t have trouble reminding his peers to mask up in the athletic buildings, he sometimes has difficulties when people take their shirts off while working out, something that is specifically against Bates policy.

“There was one time when I was working at Alumni Gymnasium and there were some players who were in the Gray Cage without shirts … I was finding it hard to tell them that they needed to wear them instead of being half-naked,” he said. “I remember I went in like three times reminding them to put on their shirts. Whenever I left, they removed them.”

It can also sometimes be uncomfortable to remind students of the rules when Obiero knows them in other contexts, he said.

“A person who I’m in the same class as would come in without a mask and I’ll have to remind them to wear the mask,” he recalled. “Then, later on, they’ll be like, when I’m not working, they’d be making fun of me or something.”

He added that “sometimes it’s fun to talk about such experiences, but other times, it’s not.”

Despite some difficulties he’s had enforcing the rules, Obiero still loves working as an attendant.

“My favorite part is just sitting at the front desk and saying hello to anyone who walks in,” he said. “Usually I find myself to not be so outgoing, but most times I actually find people interesting. So whenever someone comes into the athletic facilities, [it’s nice to] just say hi and have a short chat.”

Jackson Chung ‘23 has been a facility center attendant since the fall of his first year at Bates, and, for the most part, he has really enjoyed it. His responsibilities include monitoring access control, equipment maintenance and cleaning as well as dealing with students working out in the facilities.

For the most part, Chung has found that “the general population of students are pretty respectful” of the mask mandate. He said that while he’s never had bad experiences, he’s heard of other fitness attendants having troubling interactions with students.

“I don’t know how much there really is to enforce upon it, because it’s either people are going to listen to it, or every time you walk away they’re just going to take it off again,” he said.

In his experience, asking someone to follow the rules is easier when he knows them, because he’ll tell them that if they don’t wear a mask, he’ll get in trouble or that someone will have to ask them to leave. It is the most difficult to enforce the mask mandate, he said, when there is a team in the facility with their coach.

“The hardest situation is when there are athletes, like all together with their coaches, and they’re not complying with the mask mandate,” he said. “I think that’s really the one situation that it’s hard to step in because there’s already an adult there.”

Chung, like Obiero, credited working in the gym with helping him be more social, as he is able to interact with people he wouldn’t “necessarily see on a daily basis.”

“I think for people that are at the gym, [having someone at the front desk] makes it a more fun experience,” he said. “Definitely being exposed to people around campus and having an opportunity to chat and just be a part of the gym community is always fun.”

Joanna Cloutier ‘23 is a facility manager, which is the highest ranking student worker role the department offers. Her responsibilities include serving as the manager-on-duty of other student employees, opening and closing facilities as well as serving as a primary responder for emergencies and risk management issues.

As a member of the women’s soccer team, Cloutier has been working in the athletic facilities since the fall of her first year after the team wrapped up their season. She said she feels like she has to enforce the mask mandate “every shift, multiple times a shift.”

“It’s difficult because I work out, I go to the gym, I play soccer at the Gray Cage, and I don’t want to wear my masks at those times but I know that I have to,” she said. “It’s difficult confronting someone that you know usually or that you’ve seen around, telling them to wear a mask.”

Cloutier also noted that because she carries an iPad, which she needs while on shift, she can sometimes look “pretty official,” but said that “really, we’re the same as them.”

She added, “Just in this scenario, we have this power, and that’s been a little bit odd to sort of grapple with. But over time I’ve gotten better at just kind of confronting them and trying to keep the level the same and asking, peer to peer, ‘Can you please put your mask on?’”

One of the biggest responsibilities held by student facility managers like Cloutier is opening and closing the athletic buildings, something that she has struggled with lately.

“I would say the biggest thing I have experienced myself is people not leaving during closing,” she said. This means she has to stay past when her shift ends, too, which can be difficult when she has other plans after work or needs to do homework.

“Closing is really busy because I have to close all of Merrill [Gymnasium], all of Underhill [Arena], and then I have to go all the way to Alumni [Gymnasium] and close it,” she said. “And there’s an attendant at each of those buildings waiting for me to get there.”

Attendants’ closing shifts end at 8:00 p.m. on the weekday, so people that refuse to leave the buildings on time force her and the attendants to stay late, which “holds up the whole process.”

There was one instance, she recalled, when despite many warnings well before Merrill closed, a student refused to leave until around 8:10 p.m. Despite that being only 10 minutes after closing, she could not begin the lockup process until everyone was out of the building.

In a separate interview with The Student, Riley Theriault ‘22, another facility manager, shared similar instances of students refusing to leave the facilities when it was time to lock up.

She described an incident when, despite having warned a group of students repeatedly that the gym was going to be closing, they asked her multiple times if they could stay an extra half hour.

“If something happens, it falls on me and I don’t want to lose my job [or have] anything bad to happen,” she said. “They left and I was turning off the lights. I saw them go back inside and they had their phone flashlights on, like they were trying to get around. When I walked up to the door, they all just ran out. It [was] like a cartoon.”

Theriault then had to wait an extra 45 minutes because they were still in the building.

“I hate to ruin somebody’s fun, but at the same time, I can’t lock it when people are in there,” she said.

Theriault has been working for the athletics department since her first year at Bates, having initially started by cleaning the basketball courts. Also mirroring Cloutier, Theriault told The Student she felt like she had to enforce the mask mandate every shift she works.

“It does make you feel kind of awkward and uncomfortable, especially because I’m typically not a very confrontational person,” she said. “I try to make it pretty casual because it’s just the rules of the gym in the pandemic.”

One of her responsibilities as a facility manager is to walk around every hour to mark down how many people are in the space. During that walkaround, she makes sure to ask people to put their masks on when they’re not wearing them.

“Sometimes I’ll walk around again to see if someone actually listened to me,” she said. “There was one time I think I went around like three times within 15 minutes and the same person kept having their mask down.”

Theriault had to warn them that it was her responsibility to write an incident report if they continued to wear their mask improperly.

“They kept it on after that, but I really wish I wouldn’t have to resort to like, [threatening] to write an incident report,” she said. “I wish it was just kind of like, you know, for [the] concern of others.”