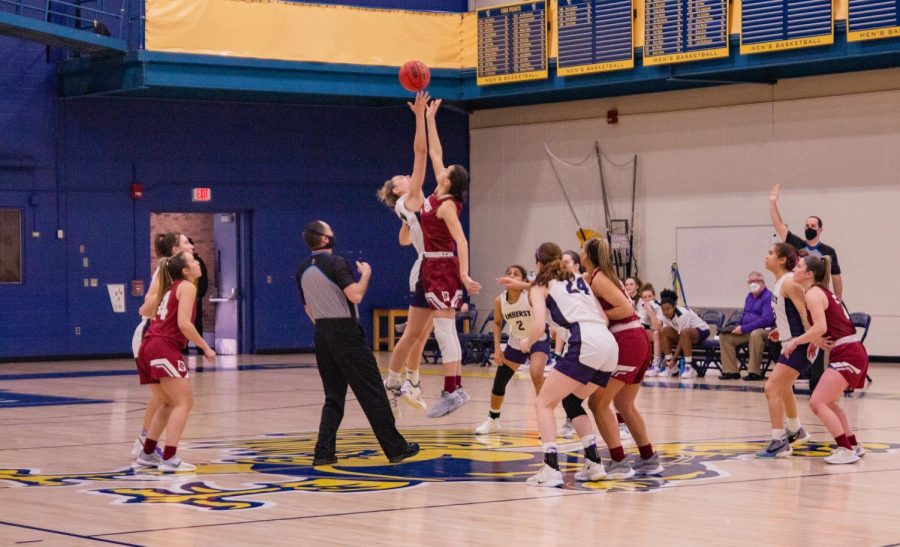 The Bobcats had an historic season, becoming NESCAC Champions for the first time in program history.

On Oct. 15, the women’s basketball team knew something special was about to happen. It was the official start of their season, and the team thought they could win a NESCAC Championship.

The women were not nationally ranked, nor were they one of the three teams that had ever won the championship. But, according to members of the team, they knew they had what it took to win the tournament. And they were right.

Junior forward Briana Gadaleta said she knew right away that they had the “stuff,” which she characterized as the “chemistry, energy and intangible qualities” that the team was able to showcase in every game they played this season.

Those qualities, or that “stuff,” helped the women make history this year, winning the program’s first ever NESCAC Championship and marking the first time a team that was not Amherst, Bowdoin or Tufts had ever won.

The women approached every practice with a “championship mentality,” Gadaleta said, which helped them achieve an 18-8 record, going 6-4 in the conference.

“The first couple practices [I realized] the whole team was deep, meaning talent-wise, there wasn’t just a couple of girls that were going to carry the team,” she said. “On any given game anyone can drop double doubles or have a really successful game, so I thought that’s what felt different.”

The championship mentality was a consistent theme for the women this season, noted Head Coach Alison Montgomery.

“Our vision every day has been to have a championship mentality,” she said. “It’s something that we’ve used to refocus, like in practice. [We’ll say] what we’re doing right now doesn’t reflect like a championship team.”

Senior Mia Roy, the team’s starting guard, noted how crucial it was to play a full season, especially as a senior. When she decided to play basketball at Bates, Montgomery told her it was an opportunity to “build a program that becomes a championship team.”

She added that though it “is so much easier to come into a program that has everything set up,” she and the other members of the class of 2022 “came in as freshmen and [Montgomery] really treated us like leaders.”

When this season started, she felt like they had built up both an impressive team and culture.

“We had the NESCAC Championship day in our calendars,” she said. “We’ve all just been looking forward to it for so long. It’s so impressive we actually got there.”

Leading up to their championship game against Amherst, the women played Middlebury and Trinity. Both teams were seeded higher than Bates and had previously beaten the team earlier in the season.

“The first game against Middlebury was kind of a revenge game,” Roy remarked. She definitely got her revenge in the 87-75 win, scoring 35 points, the most any woman has ever scored in a NESCAC tournament game. “We were really motivated to prove to them, or prove to everybody, that we could beat them. Then it was kind of just for each game we weren’t skipping steps. We focused on each one.”

Meghan Graff, a junior guard who was just named the NESCAC Women’s Basketball Player of the Year, was originally in the class of 2022 with Roy. She decided to take a year off during the pandemic, where she played in adult leagues and dabbled in coaching.

Looking back, Graff said this season stood out because it felt like the work she and the other upperclassmen had put in was finally coming to fruition.

“This season was especially exciting because I think what we were working so hard to get to, like freshman and sophomore year, we finally had,” she said. “It was really exciting. We knew we were going to be a super talented team and were on the same page about what we were trying to achieve.”

In the NESCAC Championship game against Amherst, Graff logged 20 points, which is a light day for her. This season, the junior hit the 1,000 career points benchmark, something she called a “really cool milestone.”

Graff said she felt more focused on the tournament than she did making it to 1,000 points. If anything, she remarked, the milestone just helped with the team’s momentum. She also gave credit to the underclassmen talent who helped the push toward the tournament.

Sophomore guard Morgan Kennedy has seen a lot of playing time this season; in the semi-finals against Middlebury, she logged 12 points, and in the team’s quarter-final win against Trinity, Kennedy added 14 to the score.

“We didn’t have a season last year but this makes it feel like it was all worth it,” she said. “The level of focus has just been next level in everything we do. Our practices are always really energized and the whole team collectively just wants it.”

Alexandra Long, a first year guard who walked onto the team, has also seen minutes this season, including playing an important role in the tournament games.

“Once I spoke with [Montgomery] and worked out with the team in the fall, it was very clear that this program was ready to compete, especially after that COVID year, and had some really good players,” she said. “I was completely bought in, in the same way that everyone else was.”

To be a part of a NESCAC Championship team is exciting for Long, who thinks the team’s success is only just the beginning.

“It’s kind of nice to have a little switch up in the NESCAC and have another team be able to make a statement and have it be us versus the teams who have won in the past,” she said. “Yep, we’re a real team to compete with, and we’ve got some business to take care of.”

While the women ultimately came up short during the second round of the NCAA Division III tournament, Bates sports fans can look forward to next season, where they will work to continue their NESCAC supremacy.