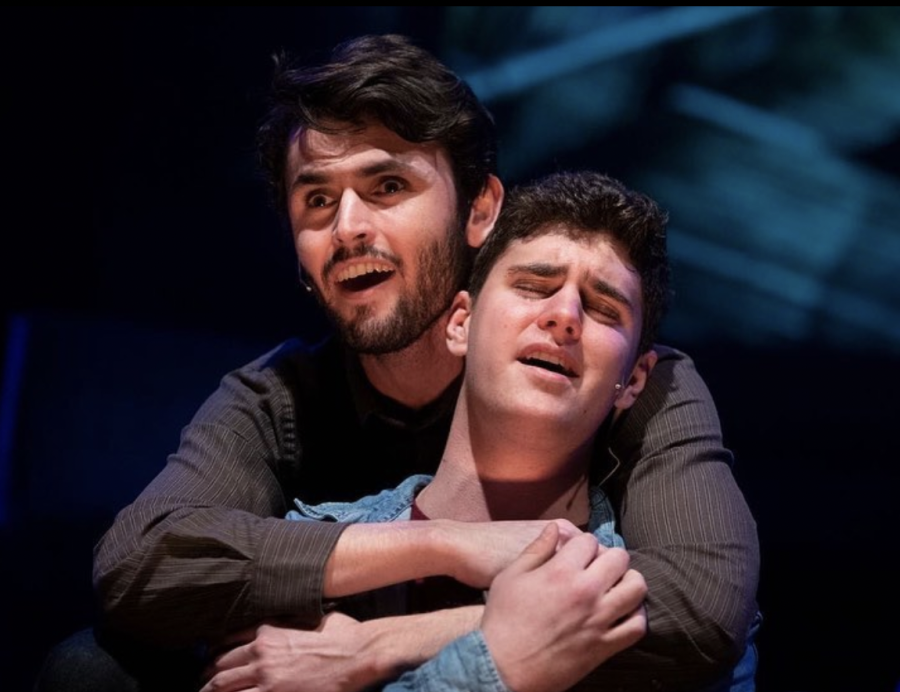 “The Seraph” features two couples, Max Younger ‘22 and Miles Hagerdorn ‘25 (pictured) and Sadie Basila ‘23 and David Walker ‘24, singing counterpoint duets and cradling each other, while fifth cast member Liv Silva ‘22 strummed along on the guitar.

Of all of the powerful, show-stopping moments in “35MM,” there are many that could be my favorite: the delightfully creepy ending of “Leave Luanne,” the climax, complete with a disco ball and glitter of “The Ballad of Sara Berry” and the tongue-in-cheek humor of “Caralee.”

However, the moment that stood out to me the most was a quiet one, nestled in the middle of the gentle song, “The Seraph.” During this song, two couples, Miles Hagedorn ‘25 and Max Younger ‘22, and David Walker ‘24 and Sadie Basila ‘23, singing two different love duets in counterpoint, cradled each other onstage. Off to the side, the fifth member of the cast, Liv Silva ‘22, sat playing her guitar, carefully watching her castmates to ensure they remained musically insync.

What struck me the most was the look in Liv’s eyes: a gentle love but also a deep pulsing energy of invested presence. In that moment, it was obvious just how deeply the cast cared about what they were doing onstage, and just how much they were enjoying each others’ presence and music-making.

“35MM” is all about those sorts of moments: the small moments of intentional connection, when the world stops and a moment of intense connectedness between two or three or four people is preserved. The focus is not subtle. The opening number, “Stopped Time,” explicitly lays out the musical’s interest in “stopped time, / Captured lights / … Records in stages, pixel pages of truth,” as well as “what happens after.”

This is both a cause and a product of the fact that “35MM” is not a traditional musical. Rather than following a plot, the show is held together by the theme of photography. Each song is independent, containing its own characters and narrative arc. Most notably, each song is inspired by a photograph, projected on three large screens that formed the backdrop of the stage.

Those three screens and a few barstools were the only major pieces of scenery. A couch was wheeled on at one point, and a demonic doll took center stage at another point, but the stage was otherwise mostly blank. Similarly to the dearth of a plot and a set, there were no characters. The list of musical numbers credited performers by their first names only. (For that reason, I am crediting the actors here by their listed first names.)

In one word, the production was casual — a celebration of the magic of storytelling for the sake of storytelling. It was delightful to see the actors embrace this. Most of the time, the cast was onstage even for songs they didn’t perform in, and it was lovely to watch them lean against each other, laugh at the performers’ jokes and enjoy the music.

The relaxed atmosphere allowed the music to shine through. “35MM” is subtitled, “A Musical Exhibition,” and that took both literal and figurative center stage throughout, from the presence of a live orchestra of student musicians onstage (conducted by pianist, accordion player, director and musical director Noah Pott ‘22, who is quite literally the beating heart of the production) to the rhythmic pulse that underlaid the whole show.

And, of course, the singers were the most visible center of it all. Liv, Sadie, Max, Miles, and David are five powerhouse vocalists. Liv has a unique talent for singing sweeping, operatic high notes. Sadie is a breathtakingly strong belter with a knack for crisp articulation. Max has one of the cleanest, purest voices I have ever heard. Miles has an impressive range, both of notes and emotion. David’s voice has a particular forcefulness and strength, coupled with the ability to be lighter when needed.

It took the vocalists a bit of time to fully blend together at the performance I saw — the first act’s solos were stronger than the group songs — but by the midpoint of the show, their unified power was uncontestable. Some of the later songs in the show quite literally gave me goosebumps.

The cast members weren’t just good singers, they all had acting chops, too. Of particular note was David, who, throughout the show, portrayed roles both terrifying, an abusive husband in “Leave Luanne,” and sweetly vulnerable in “The Seraph.” Miles had impressive control of comedy beats in “Caralee” which was presumably about a rambunctious child running her babysitter ragged.

Liv had roles that made me shiver with creepy power, a vengeful ghost in “Leave Luanne” and a girl dancing with death in “Twisted Teeth,” as well as roles that made my heart break for her. Sadie had a strength for comedy beats that made her stand out, and the range of emotions she showcased with utter believability was impressive. The depth of emotion that Max brought to songs like “Cut You a Piece of Me” was unique and heartrending.

At times, though, the unconventional structure of the show was a little confusing. While the subtext, at times, was clear— like the rumination on making art from pain in “Immaculate Deception” or the dangers of manipulative unrequited love in “Twisted Teeth” — there were other times when I felt there should have been subtext when there wasn’t.

The different vignettes should have been braided together in a way that revealed deeper truths. Liv and David appeared multiple times as a couple, subtle references to religion peppered a good number of songs but at other times were conspicuously absent and Not once, not twice, but three times, Liv played a woman killed (intentionally or unintentionally) by a male romantic partner. There had to be some deep thematic moral connecting all of that, right?

Sometimes, just when I thought I’d finally figured out an underlying connection, it was broken without explanation. The second act, for instance, featured three songs, “Twisted Teeth,” “Hemming and Hawing” and “Cut You a Piece of Me” about complex romantic relationships. These songs were followed immediately by “The Ballad of Sara Berry” which was about a high school girl turned serial killer thanks to prom-queen-election drama.

While that last song is one of my favorites on the soundtrack and a showstopper thanks to the sheer power of Sadie’s belting, I wasn’t quite sure what to make of it in the context of the show. What was I supposed to understand about humanity with the juxtaposition of these songs? How did a song about high school politics turning to bloodshed highlight the theme that romance is complicated? I never quite figured that out.

In the end, I decided that maybe it was best not to overanalyze things — in fact, I think that is genuinely the point of the show. Rather than parsing through “35MM” for tiny thematic similarities, the show should instead be enjoyed as real life is: a series of moments that, thanks to the delightful randomness of the world, are often similar yet don’t ask you to search for metaphors in things that are meant to be taken as they come.

Perhaps I should have realized this earlier. Pott spelled it out in his director’s notes: “If there is one thing that I have learned from this production, it is that sometimes we can just make art for the hell of it, just because it is plain fun. After all, ‘Why must we tell them why?’” (That last line quotes a song in the show.)