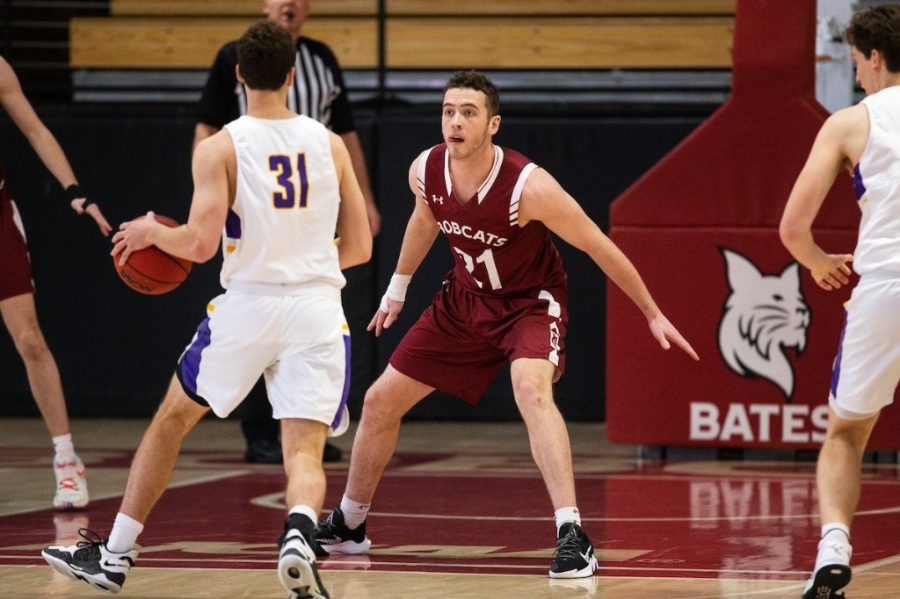 Steven Ward ‘24, would be a good player to defend against Trinity’s top player on Friday night.

Bates played Trinity just a couple of weeks ago, and it was a heck of a basketball game. Trinity pulled it out 70-66 in Alumni Gymnasium, but the contest was very close throughout; Bates’ largest lead was only four points, and Trinity led by as much as 11, with three ties and four lead changes along the way.

Donald Jorden ‘22, Trinity’s leading scorer, got injured early in the game but returned in the second half and completely dominated the paint when he did. His physicality and touch were too much for the Bates big men (Omar Sarr ‘23, Kenny Aruwajoye ‘22 and Stephen Ward ‘24) to handle. And, what’s worse is that Sarr, who would theoretically be the best antidote to Jorden down low in this second contest, will be absent for Friday’s game.

I would imagine Aruwajoye, Ward and Cam Riley ‘23 will all get some time defending the big fella, but I would personally like to see Ward spend the most time on him. Not only is Ward unbelievable with his hands, but he’s also phenomenal at bodying up against big men who try to back him down, which is how Jorden will look to get most of his buckets.

Finally, though — and most importantly, in my opinion — Ward is usually undersized against bigs, which is essentially his only weakness on that end, but he’s the same size as the also 6’6” Jorden, making him the perfect guy to slow down Trinity’s best offensive weapon.

After Ward, the Cats will have to look out for Will Dorion ‘25, who put up 13 and nine assists in his first matchup with Bates. Dorion was able to get into the paint with ease, and once he was in there, he made great decisions finding open corner shooters and big men chillin’ in the dunker spot. He was also able to shoot over the smaller Bates guards, so I’ll be curious to see how Bates coach Jon Furbush decides to play him.

Offensively, Bates will have to do a better job moving the ball from side to side and getting Steph Baxter ‘23 and Jahmir Primer ‘25 in positions where they don’t have to attack set defenses. Not only will that allow the Bobcats two best scorers to take easier shots at the rim, but it will also make it easier for them to get into the paint, which will result in open threes for three point shooters who should shoot better than the 26% from three they shot the first time around against Trinity.

I’m really looking forward to this game, and I think Bates definitely has a chance at making this another good one. I’ll be taking Bates +4.5 (just kidding — there is no line for this game, and betting is bad).

The Bates women lost by eight to Middlebury just this past week, and they’ll have to play them at their place again on Saturday afternoon. This is incredibly unfortunate, because Bates is 5-5 on the road compared to 9-1 at home.

In the first matchup, Bates had a really tough time with Alexa Mustafaj ‘25, Middlebury’s leading scorer at 20 PPG on the season. The 5’5” freshman got to the free throw line 10 times in the game by utilizing her quickness and change of speed. I expect Mia Roy ‘22 to be placed on her in this playoff matchup, but Roy had a tough time staying out of foul trouble in game one, so she’ll have to limit that in order to be able to play her aggressive style of defense late in the second half.

Bates will also have to shut down bench player Michaela Sullivan ‘22, who went off for 13 points in only 16 minutes in game one.

Most importantly, though, Bates will just have to hit more shots than they did in the previous matchup. They went a whopping 15% from three on 20 attempts, and most of them were good shots that players like Roy, Morgan Kennedy ‘24 and Meghan Graff ‘23 will likely hit a higher percentage of the second time around.

They also shot only 31% from the field, so they’ll have to figure out how to finish around the rim, which I expect they’ll do better with in round two. Although I’m not making any excuses, I would attribute this poor shooting performance to the fact that the women’s team played six games in nine days and were likely incredibly tired. Having no legs when you’re shooting is going to make it tough to shoot well, but with about a week of rest, the women will be fresh and ready to go against Midd.