From Bates to Beijing: Climate Change on the Slopes 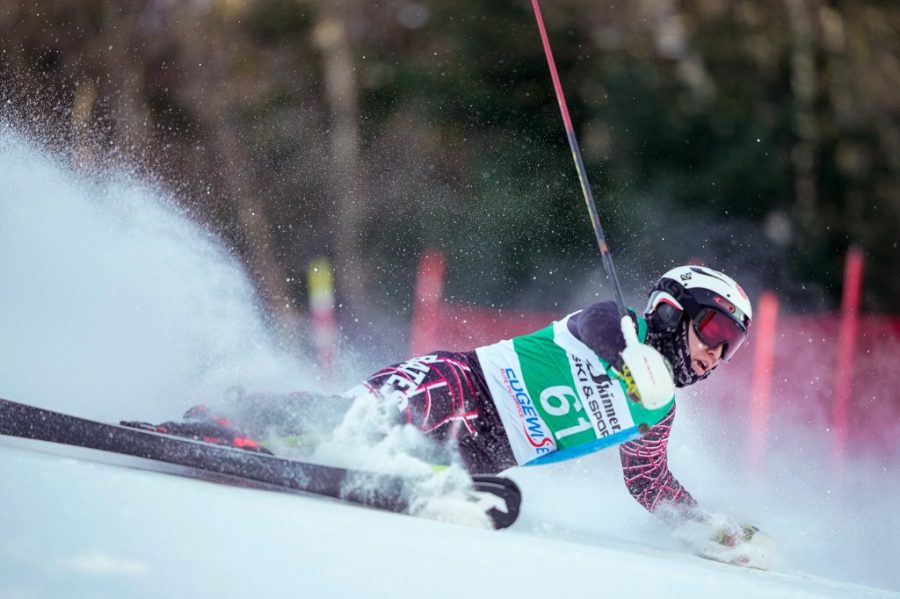 The rise in artificial snow, partially due to climate change, is changing the way athletes across the globe (and at Bates) ski. Here: Marat Washburn ‘25 in an alpine skiing race.

Climate change is bringing challenges to the skiing industry both locally and at larger events — even at the 2022 Winter Olympics in Beijing. Experts say that ski mountains are increasingly relying on artificial snowmaking to get through the season.

“All the resorts that I’ve worked for have barely kept up with the demands of New England weather,” said Ethan Baker, a sophomore from Jackson, New Hampshire. Baker is a longtime New England skier and has worked as a ski patroller for the past six seasons.

He currently patrols at Sunday River in Newry, Maine. “The unpredictable nature of long-term weather patterns over the past decade have created more challenges to an industry where it’s already difficult to turn a profit,” he said.

Sunday River, just over an hour drive from Bates, claims to have “the world’s largest high-pressure snowmaking system” and has spent millions of dollars on new snowmaking equipment. While necessary to maintain skiable conditions during unreliable weather patterns, these systems take a negative toll on the resorts, as well as the entire state.

“At the height of snowmaking operations in December and early January, the entire Central Maine Power grid gets affected,” Baker said. “And because ski areas can’t rely on solely natural snow to operate, the economic viability of skiing is in question.”

Simard said man-made snow is masking the impacts of climate change on the slopes: “The ski seasons in New England have become longer with better conditions than say 20 years ago. This is due to the improvement and efficiency of snowmaking technology, despite climate change.”

Ryan Gordon, a hydrogeologist for the Maine Geological Survey, said Maine’s winter season has been changing quickly due to climate change.

“Since I was a child growing up in Orono in the early ‘90s, average winter temperatures have been warming at about twice the rate of average summer temperatures,” he said.

He explained that while Maine has experienced more overall precipitation in recent years, the state is recording more rain than snow, which creates more icy conditions. On top of that, melting is happening earlier in the spring.

Gordon highlighted the impact these patterns will have on the ski season, particularly in the backcountry and at smaller mountains.

“The changes in Maine’s winter season will have negative ramifications for ski culture in our region, especially away from the large ski resorts that can mass-produce their own snow,” he said.

While ski mountains have been facing these issues since the late 20th century, the debate on artificial snow has been making recent headlines with its crucial role in the 2022 Winter Olympics.

An article for The New York Times reported that for the first time ever, the snow at the Winter Olympics was entirely manmade, with snowmaking operations beginning as early as November 2021. The energy and resources used to produce snow for the competitions have called attention to the sustainability of the Winter Games; the International Olympic Committee estimates that almost 50 million gallons of water will be used to produce snow for the competitions, which began on Feb. 4.

This water use is especially harmful in a place like Beijing, which has experienced record-breaking droughts in the last decade.

Not only is man-made snow an economic and environmental issue, but it poses a threat to safety, as well, according to a PBS article. Most winter athletes can easily feel the difference between natural and artificial snow. The article explained that while natural snow falls from the sky with particles forming in the classic hexagonal snowflake structure, man-made snow consists of individual droplets of frozen water, giving it much more of a hard, icy feeling for athletes.

This man-made snow can be beneficial for skiers and snowboarders, as it allows for faster speeds and sharper turns, but it also means that the sport is more dangerous. Simard said that the ideal snow condition is a mix of artificial and natural snow.

“Artificial snowmaking tends to be more dry and dense, almost like chalk dust,” he said. “Generally the best is a groomed mixture of both natural and snowmaking. When you mix in some wet snow and then it freezes, it’s best for racing.”

While artificial snow can make conditions ideal for ski racers at Bates and beyond, Simard added that he has noticed more inconveniences caused by climate change in the form of adverse conditions and high wind days causing chairlift holds on the mountain.

While man-made snow ensures consistent conditions for both competitive and recreational skiers, it perpetuates the idea that we can ignore the effects of climate change by using technological solutions to create our ideal climate, which often ends up continuing the cycle in a positive feedback loop.

Gordon and Baker both emphasized the importance of climate action to save skiing in New England and around the world. They said that by limiting the consumption and the use of fossil fuels as well as supporting legislation that aims to combat the climate crisis, there could be a chance to save the snowy winters and continue the ski industry in a sustainable way.