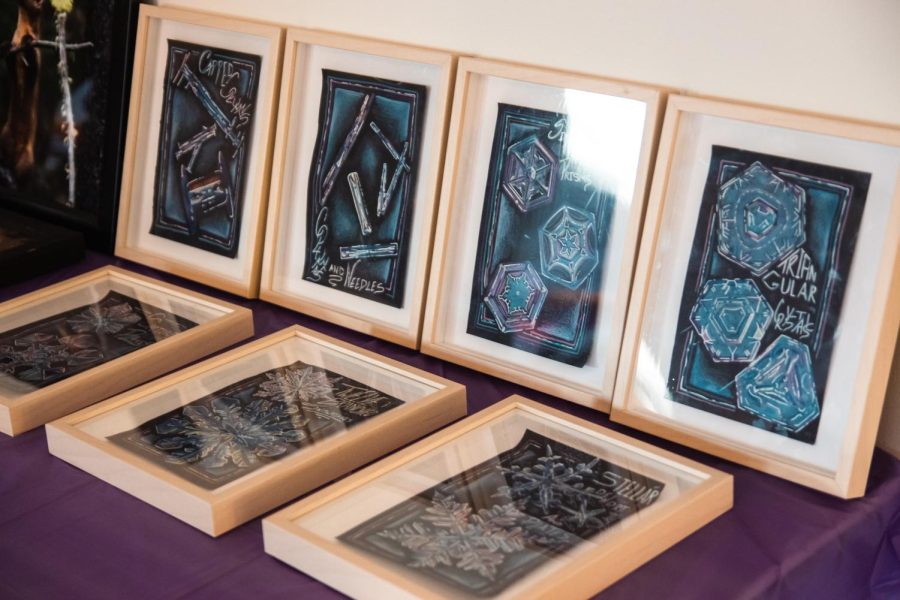 The Winter Arts Festival, which was held Feb. 11-13 this semester, has been through several iterations in recent years. Prior to its 2020 revival, the festival was known as the Bates Arts Crawl. With its former title, student work spanned across campus, so you “crawled” from building to building.

For the February 2020 festival, the Bates Arts Collaborative moved everything into the Olin Arts Center. During 2021, the festival was held online in collaboration with L/A Arts due to COVID-19 (and is still available to view here).

This year’s Winter Arts Festival was meant to be fully in-person, but thanks to omicron variant rises, the festival was conducted hybridly. The event was also spread across an entire weekend rather than just one evening.

A gallery of student work was up all weekend in the foyer of the Olin Arts Center. The gallery featured work from Nick Charde ‘22, Charlotte Collins ‘22, Bryn Creager ‘25, Anna Greenspan ‘22, Amanda Metzger ‘22, Michael Morgan ‘22 and Huck Triggs ‘24.

Creager’s work was a personal highlight for me; done in a medium I am not visual art-literate enough to identify, the black backgrounds featured various purple, blue and white snowflakes.

Triggs’ nature photography also stood out. It included one gorgeous shot of a lake in autumn, with the colors of the trees reflected in the water.

On Saturday at 5:00 p.m., a live event was held in the Olin foyer. Benches were turned from their usual spots against the wall to face the door that leads down the leftmost hallway, which created a little stage where the stone transitions into linoleum. An upright piano was set up off to the side.

Greenspan and Bora Lugunda ‘25, two of this year’s festival coordinators, served as co-emcees of the evening’s performances. TakeNote opened the proceedings with three songs. While the lack of microphones made it difficult to hear their soloists, it was still one of the best performances I’ve seen from TakeNote. They have come a long way from their September Puddle Concert with only four members.

Maria Gray ‘23 then read a collection of her poems. One of the poems she read, “Where Were You When Mac Miller Died,” was recognized last fall as a semifinalist in poetry from the Adroit Prizes. Others she read are published in Counterclock Journal (“February 15th”) and Perhappened (“Object Impermanence”). Her poem “Tetherball” is forthcoming from Ice Lolly Review. This run of accolades probably already tells you, but let me confirm — Gray’s poetry is excellent and worthy of every ounce of praise. Her stage presence matches, cracking jokes in between readings.

Gray was followed by Mathieu Moutou ‘22. Moutou played the piano and sang two songs: Vitaa’s “À Fleur de Toi” (which roughly translates to “You’re Under My Skin”) in the original French, and Alicia Keys’ “If I Ain’t Got You.” Moutou faced the same sound issues as TakeNote — especially since the placement of the piano meant that he was facing away from the audience — but his beautiful crooning voice carried. I could listen to him sing French break-up songs all day.

The Merimanders closed out the performance. Unlike TakeNote, they sang their three numbers all in their group formation. From what I could tell, only one song seemed to have any sort of “featured” performer, but they stayed in the half-circle with the rest of the group. It was a great note to end the evening on.

On the Bates Arts Collaborative’s website, a collection of videos round out the festival. 2BEATS, Cristina Salazar ‘25 and Talia Kurlansky ‘22 all offer dance pieces spanning hip-hop to traditional Costa Rican. Ben Hoffinger ‘22 shared his “Juggling With a Hint of Citrus” routine while Craig Selbrede ‘22 shared the teaser trailer for his new series “Relic,” a joint partnership with students in England that will premiere online later this year. Finally, Maddy Ewell ‘24 performed the first movement of an arrangement of Beethoven’s WoO 26 in B-flat major, arranged for the violin and the flute.

While the festival itself is officially over, the videos are still available on the Arts Collaborative’s website. To continue to support student art, stay tuned for upcoming student productions, concerts and showings on Bates Today.