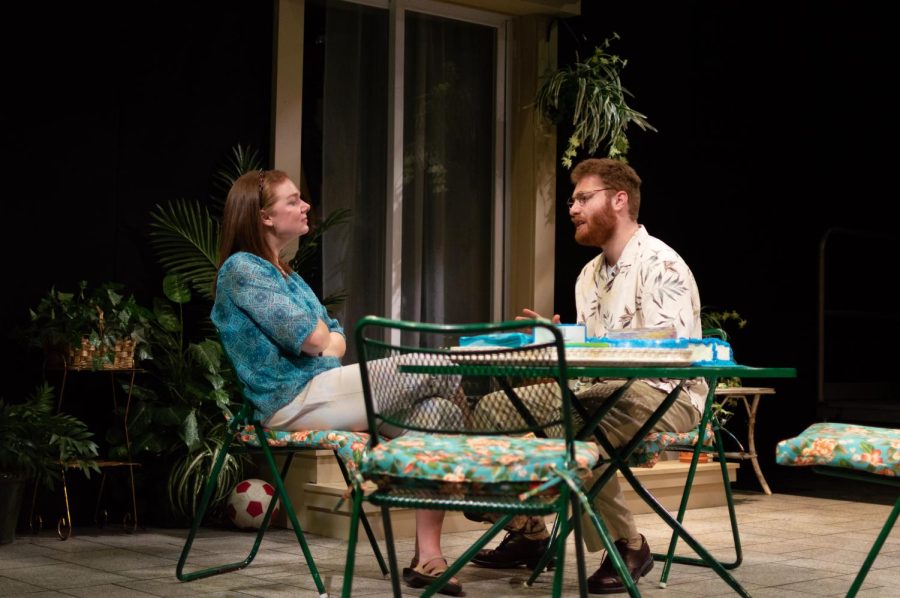 Alex Gilbertson ‘22 and Brendan Fitzgerald ‘23 star as Don and Gwen, whose marriage is on the rocks.

Note: Olivia Dimond is the managing arts and leisure editor of The Student, but she did not see this review until its publication.

Last week, when I decided to cover “Rapture, Blister, Burn,” I thought it would be a straightforward review to write. I arrived at the theater with my notebook, presuming I’d jot down a few key points and maybe a favorite line or two.

Instead, I walked out with three and a half pages of notes and the prospect of writing the hardest review I’ve ever done.

It is also undeniably brilliant. The script is beyond worthy of its Pulitzer nomination, and the cast and crew of Bates’ production deserves a deafening standing ovation.

The Bates production was staged last Thursday through Monday in Gannett Theater and ran about two and a half hours, including an intermission. It was directed by Olivia Dimond ’22 (in partial fulfillment of her directing thesis), stage-managed by Mingzheng Wang ’24 and sound-designed by Tim Butler ’25.

The story centers around Gwen (played by Alex Gilbertson ’22, in partial fulfillment of her acting thesis) and Catherine (Paige Magid ’24), graduate school classmates who chose diametrically-opposed (or so they believe) life paths. Catherine followed her academic nature, ending up with a teaching career and two published books on the intersection of technology and feminism. Gwen, meanwhile, married Don (Brendan Fitzgerald ’23), the third member of the grad-school friend group, and now has a life centered around her two children. When Catherine returns home to look after her elderly mother, Alice (Dianna Georges ’22), who has recently suffered a heart attack, she catches up with Gwen, and the two find themselves pining for the other’s life.

Twists and turns abound, and by the end of Act I, Gwen is taking a summer class that Catherine is teaching and Catherine passionately kisses Don. By the time the second act opens, the pair are yearning for an escape — and so they “switch lives,” so to speak. Gwen spends the summer living in Catherine’s New York apartment with her oldest son, who wants to be an actor. Don and Catherine move in together, enjoying a fiery affair. Catherine also continues teaching her summer seminar to her single remaining student, the unabashedly perky Avery (Alison Robelen ’25), a feisty, purple-haired 21-year-old who was turned away from a babysitting job for Gwen because of her black eye.

As is to be expected, there are bumps in the road, and neat resolutions are sparse. In Act II, Gwen and Don end up back together, not from any deep pining love but from an exhaustion too deep to keep seeking perfection. The play closes with Alice, Catherine and Avery huddled on a couch making tepid plans for the future — a found family of sorts, three generations of women embracing the nontraditional. They are notably alone for it, while Gwen and Don at least have each other, having traded uncertain hope for immediate comfort.

What makes “Rapture, Blister, Burn” so brilliant is that the aforementioned portion of the plot — the superficial “elevator pitch” summary — cannot be separated from the play’s more nuanced, philosophical musings. Catherine’s seminar on feminist theory, which covers thinkers from the conservative Phyllis Schlafly to the sexual-liberation advocate Nancy Friday, intertwines brilliantly with her, Gwen’s and Avery’s respective searches for romantic fulfilment. Though the entire group arrives with preconceived ideas, Catherine cautions them that there are no easy answers and valid points on both sides.

This is a lesson reiterated, implicitly, as the action continues. “Rapture, Blister, Burn” is a refreshingly honest exploration of the boundaries between feminism and reality; while it is unequivocally pro-feminism, there are moments when it addresses that the reality of patriarchy makes it achingly difficult to be a feminist sometimes.

This is most obvious with the arc of bright-eyed Avery, who is introduced to us as scathingly critical of self-deprecation in pursuit of romance. By the midpoint of Act II, though, she’s bitterly ready to “embrace Schlafly” and the self-sacrificial techniques she had earlier so violently decried.

Likewise, when Catherine protests that she doesn’t want to kiss Don, he brutally asks whether she’s being honest, or if she’s making an empty protest “so that this isn’t your fault,” and she admits to the latter — a subtle critique of how feminism can be manipulated for self-protection.

The complexities of these characters and their actions make them massive challenges, but the cast pulls it off with resounding success. All five of the actors are breathtaking in their talent; every one of them earned exclamation points and stars in my notebook. Magid as Catherine provides the most impressive transformation in the play. When I watched her feverishly kiss Fitzgerald (as Don), it was difficult to remember the timidness she had brought to the earlier version of Catherine, fidgeting with her lecture notes; the transformation was resoundingly well-developed. Georges as Alice has an unquantifiable grandmotherly aura about her that makes it difficult to remember that she is young herself; the quiet, elderly wisdom she exudes is palpable. Gilbertson is beyond compelling as Gwen, who is sympathetic even in her abrasiveness; Gilbertson plays her as tormented and conflicted with resounding success. Fitzgerald as Don is perfectly nuanced: There are few moments when we truly like him, but we identify with him, even if we don’t want to. His final embrace of mediocrity is one we all viscerally understand, and Fitzgerald portrays it perfectly.

If there is a standout of this all-around stellar cast, it is Robelen as Avery: She is dynamic and compellingly complex in her strongest moments and in her weakest ones. (I had the pleasure of being psych classmates with Robelen last semester, and the physical and vocal changes from her natural state that she made for Avery are impressive.)

Coupled with the onstage actors are their offstage counterparts, who perform just as brilliantly. I scribbled down praises of the sound, the music choice, the lighting and the set design — a fantastically clever blend of indoor and outdoor settings. The staging was fantastic, and careful attention was paid to the details of the props and setting: Avery’s laptop against Gwen’s notebook, for instance, or the cabinet in Catherine’s house stuffed with alcohol. The staging was well-thought-out; the actors appeared comfortable with each other, and even the most physically intimate moments were believable. Similarly, the tech ran without a hitch. Dimond’s directing efforts were clear and successful, and the dynamics of the banter between the characters were stellar.

For me, the strongest proof of the brilliance of “Rapture, Blister, Burn” is its dramatic visceral effect on its audience. The entire audience held its breath when Catherine and Don kissed, and when the lights winked out, every single person in the house exhaled in unison, a collective “oof” that I could physically feel. Those moments of deep palpable connectedness came back again and again. After a fight between Gwen and Don, I felt the people on either side of me physically relax — we had all been tense from the drama.