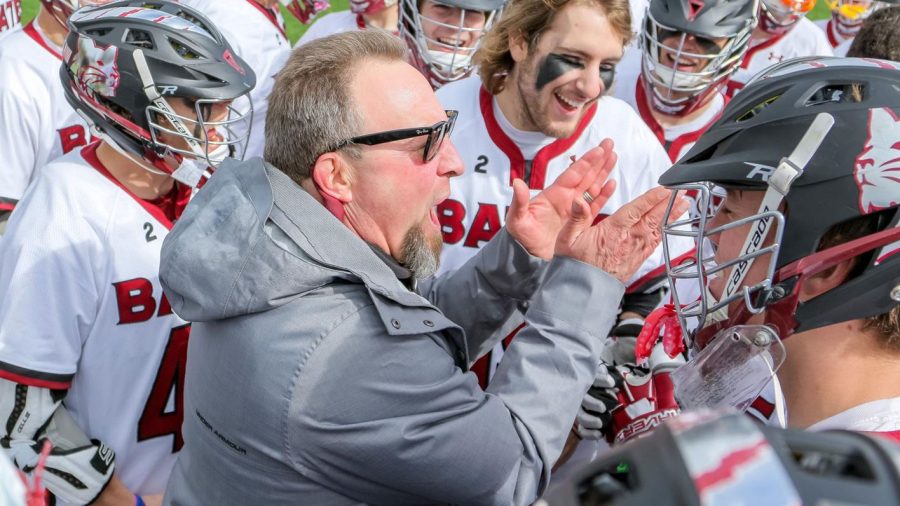 When Coach Peter Lasagna was first informed that he had won the 2021 Lifetime Service Award from the Intercollegiate Men’s Lacrosse Coaches Association (IMLCA), he was honored, but also a little bit concerned.

“I thought, maybe, this is something you’re supposed to get after you’re done coaching,” he said. “I thought, did I miss the hint that somebody was trying to give me that it was time for me to start doing something else?”

It’s funny that Lasagna would think that, because when you look at his career, it is easy to see why he was chosen. In his 21 years of coaching at Bates, he’s been named NESCAC Coach of the Year three times, leading the Bobcats to eight appearances in the NESCAC Championships and two in the NCAA Tournament.

Lasagna came to Lewiston from Providence, Rhode Island, where he coached the Division I Brown University Bears for 18 years, spending the last eight as head coach. The decision to move to Maine was fueled by love for his family and a push from his wife, Holly.

“Holly started making the argument for why I should at least think about the move. A lot of it had to do with the fact that we had eight- and 10-year-old children,” he told me when we sat down to talk over Zoom. He chose to move his family to Maine so that he could see his children more frequently and focus on his family while competing in the NESCAC, a league he had been impressed with since he was in high school.

“I [went home and] said Bates just felt right, like it [felt] like a place where we could live and we could be happy,” he said. After some more pushing from Holly, he decided that the switch to Bates was the right decision.

Lasagna brought immense success to the Bates program; one of his favorite coaching memories comes from the 2017 season, when he led the team to a No. 1 national ranking.

“That whole run was one of my favorites, especially because the story behind it is that those guys that were seniors, when they were first-year students, had a really disappointing year,” he said. “It’s one thing to be a college athlete and talk about the fact that you want it to be different, and it’s different to actually take action every day to make it different. So it was really gratifying to go through that; it was incredibly fun.”

Lasagna didn’t just bring up that moment, though. He also wanted to point out a time when he felt that his players showed integrity, something that seemed more important to him than their most successful season.

In 2016, Bates alum Ben Chin was running for mayor of Lewiston. A store downtown hung what Lasagna called a “really disrespectful, insulting and racist sign.” One of his players, Jack Allard ’16, told him that he felt it was important for the team to skip their planned workout and instead go and join a rally in support for the mayoral candidate.

“It was incredibly gratifying,” Lasagna remarked. “If you’re a coach, or you’re a parent or teacher, it’s all the same.”

He added, “This had to do with life and our role in this community and believing that it was important for a big group and maybe specifically a men’s lacrosse team that people might not associate with even paying attention to those kinds of things being physically present for community members.”

Lasagna’s goals for the upcoming season did not include a specific win or record, but rather to have a “universal investment” from his players, both on and off the field. He noted the “uneven experience” that most of the current players have faced in the wake of the COVID-19 pandemic.

“It was really complicated for student-athletes last year, especially,” said Lasagna. “So my initial goal is just to have across the board investment and commitment, which means everything about your life, not just lacrosse, but to be the most invested student you can be and the most invested community member and citizen you can be, and to work toward positive change and social justice in every way that you can.”

This spring, Lasagna said that the team will play one of their most competitive schedules yet. Jack Lousararian, a senior on the squad, remarked on Lasagna’s preparation and dedication for each game, something that will be crucial when facing off against competitive teams this season.

“Coach’s best quality, in my opinion, is the consistency in his preparation for every opponent,” he said. “No game is ever too big or too small, and no team takes precedence over someone else. The most important opponent is the team we play next.”

Junior Peter Ackley, who has been a player in the program since his first year, told The Student that he thinks that Lasagna’s best coaching traits are his attention to detail and his careful listening.

“He makes sure to give ample time and attention to every position, play and individual scenario that can occur while on the field so that nothing is new when we actually get into the game,” Ackley said. “He is always willing to hear his players’ perspectives and factor that into his game-plan for the week.”

More than those characteristics, however, it is clear Lasagna cares about the wellbeing of his players immensely. He spent a significant amount of time telling me about the strain that COVID-19 has put on the team over the last few years, but hopes that this season, their first full one in three years, will lead to great success.

“I think for these young men with everything that they’ve been through the last couple of years, you know, to be able to really be together again, and really invest in this thing that is an important part of their existence, and motivate each other is definitely a goal,” he said.

As we were wrapping up our conversation, Lasagna sat back in his chair and told me about his love of being an underdog. He said it was his favorite because “you actually have an idea that you might have an opportunity to be pretty good, but nobody else outside of your group thinks or knows it.”

After spending some time with him and speaking to his players, however, it’s clear to me that though he may see himself as such, Peter Lasagna is no underdog. When I asked him about winning the IMLCA award, he chalked it up to his participation within the organization and his steadfast attendance of its events. I don’t think that’s the case, though. While his record as a head coach both at Brown and at Bates stands out, it’s Lasagna’s commitment to the health and happiness of his players that truly speaks volumes about his character as a coach.