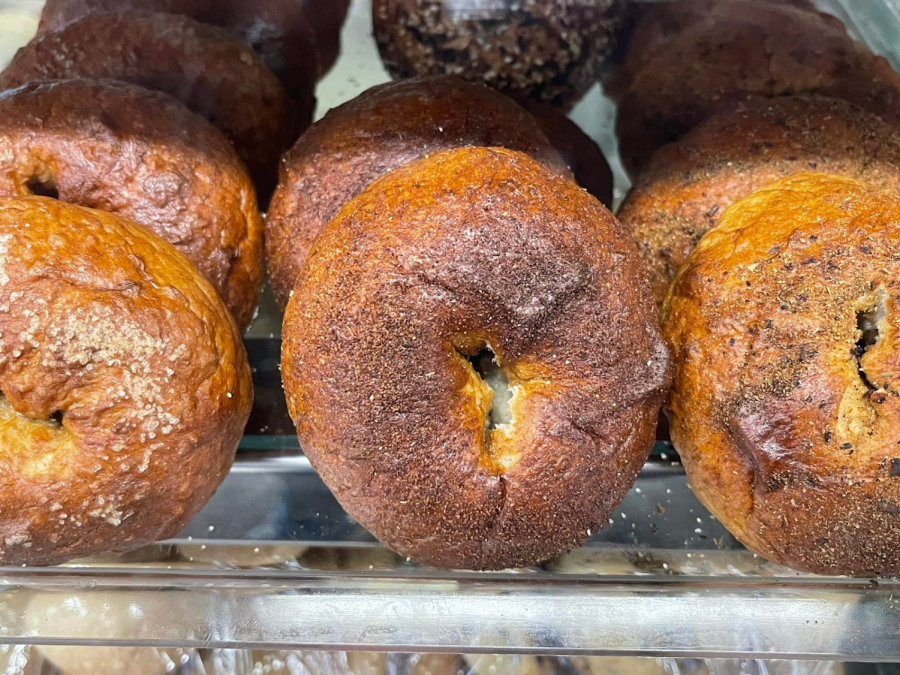 "If you’re a bagel snob who won’t touch anything that isn’t authentic, I wouldn’t go for it. But if you want a very solid bagel, have at it."

When I stumbled onto the Bakery Barn, it was out of my frustration with the lack of good bread at the supermarket. Why isn’t there a bakery near me, a bakery that doesn’t make bread that tastes like wet cement? I’d Googled “bakeries near me” for the last year to no avail. Then last week, I stumbled onto the fact that a new bakery had opened up in Lewiston just eight months ago. And now, I’m obsessed. Let’s talk about it.

I’ve spent the last week eating there more than I would like to admit, so let me do a quick run through of the food itself, because I want to focus on something else:

Look, it won’t teleport you to the heart of Williamsburg, but it’s a pretty good bagel. Their everything bagel has exceptional flavor to it and the bacon asiago bagel is a fun little twist. If you’re a bagel snob who won’t touch anything that isn’t authentic, I wouldn’t go for it. But if you want a very solid bagel, have at it. The cream cheese also has a very interesting flavor that I can’t pinpoint but I really enjoy.

Very, very good. It’s a multigrain sourdough with exceptional flavor and tanginess, with the multigrain adding a nice extra layer. If you want a really good time, toast it with ham and cheese or spread some brie on it. But you can really just eat it plain and still make fat guy noises come out.

I mean, the bacon is high quality, they do the eggs right, all the proportions are there and the everything bagel’s salty kick adds a perfect layer to an already great sandwich. What else do you need?

Do I really need to give a detailed description, filled with prose and wordplay for this one? You know what a good cinnamon bun tastes like. It tastes like that. Beautiful.

And, let me also mention: I didn’t get it, but a loaf of bread called their harvest loaf. I’ve been told that it’s straight-up the best piece of toast I’ll ever have, which sounds pretty damn good to me.

I haven’t even gotten to the best part. This is very appropriately priced. A bagel with cream cheese is $2.30. Incredibly affordable. The most expensive thing I’ve bought was $10, and that was half a dozen bagels.

You’d have to try really hard to drop $20 of food for one person here. Whereas, at other unnamed breakfast sandwich places in the Lewiston area with a local boujee feel to it, you can drop quite a hefty sum on not all that much. (Not naming names, just saying, I love the food, but it’s expensive there.)

When I sat down with owners Meghan Braun and Sarah Ferrell, I had already talked with them quite a bit, just by virtue of how damn friendly they are. There is good customer service, and then there is genuinely wanting to know everyone that enjoys their food. That’s Meghan and Sarah. I would recommend this place if they sold salt water and chalk just so you could talk to them. Wonderful, wonderful people.

And in fact, not only did I get a chance to talk to these wonderful people, I found kindred spirits in this conversation. It’s always a treat to get to chat with people who really, really love food the way I love food — people who are in the food world to create, bring joy and spread love through their food.

Sarah and Meghan have both worked in the food service industries for many years as waitresses, bartenders … whatever job title you can name, they’ve done it. They have known each other for the better part of six years.

They both had side businesses as bakers, and “When are we gonna open that bakery together?” was a long running joke between the pair. Then one day, they just kind of did it, which is an awesome way to live your life.

I always ask the same question of anyone I interview, which is how they balance making what they love with making what they think people want to eat. I got a far more simple answer than I expected:

“We’re in it to make what we love. All this stuff you see here, these are all things we cook for our family. We like food, and we both come from extremely large families, and food always centralizes those family gatherings.

“There’s things here like the Rome Bar, the Vienna Bar, that comes from Sarah’s childhood, the Butter Googols from Erik’s [chef], the spinach squares are from mine,” Meghan said. “So we bring all these things in, but growing up in a French Canadian mill town, people are very set on the things they want, and we didn’t want to follow those precedents; we wanted to do our own thing.”

They’re here to make what they love, and you’re here to enjoy it. And trust me, you’re going to.

This is a great, cute little place, owned by amazing and friendly people. The Bakery Barn feels like a home away from home; like you’re being invited into Sarah, Meghan and Erik’s worlds through their pastries and food. And to me, there’s nothing more special than that.

I’d like to thank everyone at the Bakery Barn for letting me experience their world, and insist that you stop by that world yourself. Because it’s a really delicious world.