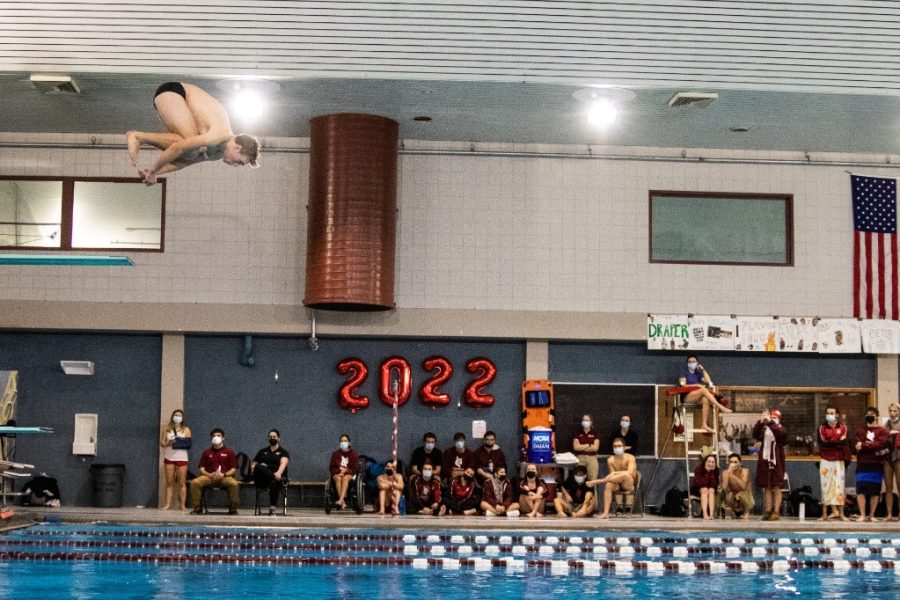 The men’s and women’s swimming and diving teams celebrated their senior day on Saturday.

Ranked 11th in the nation, the Bates women’s swim and dive team has been a force to be reckoned with throughout the 2021-22 winter season.

This past weekend, the Bobcats honored their seniors in a heartwarming celebration in the Tarbell Pool, complete with posters, balloons and a well-fought battle against the Bowdoin Polar Bears.

The women’s team went into the season ranked No. 19 nationally in the Division III conference, and has since moved up to hold the 11th spot. The team is hopeful in their ability to move into the top 10 by the end of the season.

“The season’s gone extremely well,” said team captain Caroline Sweeney ‘22. The team’s first meet was against Weslyean and Wheaton and came down to the final relay, which the Bobcats ultimately won. The team was fueled by this win, Sweenay explained; they leaned into this momentum, which has allowed them to present an impressive 6-1 record.

“Every chance we get to swim is a privilege,” Talia Skaistis ‘25 remarked. After two extremely unusual seasons, the women are thrilled to be competing somewhat normally again, acknowledging the uncertainty of the meets to follow.

Sweeney has led the team through this season alongside seniors Virginia Guanci and Kaley Swintak. This trio has fostered a supportive environment by actively communicating with each other and the rest of the team.

“Each year the team is different and everyone brings strengths in their own ways,” Sweeney said.

Skaistis and Sweeney both went on to describe the team as hardworking and committed, and their morning walks to practice in -3 degree weather can certainly attest to this. “Vocal and dedicated” were just a few of the other terms used to describe this group.

When asked about outstanding team mottos, Sweeney replied, “We have more heart and more drive. We want it more.” The team prides itself on their fighting spirit, but also on their love for both the sport and each other.

“I’ve never felt like there was no one looking out for me,” Skaistis noted. “I’ve always felt like someone cared about what I was doing and how I was feeling.”

Although the team is beginning to “wind down” as championship season approaches, they have a very busy few weeks ahead. The team is heading down to Boston next week for the WPI invitational, which will finish off their regular season. After this, off to NESCACs they go!

The NESCAC Championship will be hosted by Colby College this year, and the Bobcats are feeling confident and aiming to secure third place, a goal that they established in the early weeks of the season.

Be sure to tune into the NESCAC livestream, Feb. 10-13 to support the Cats from afar!