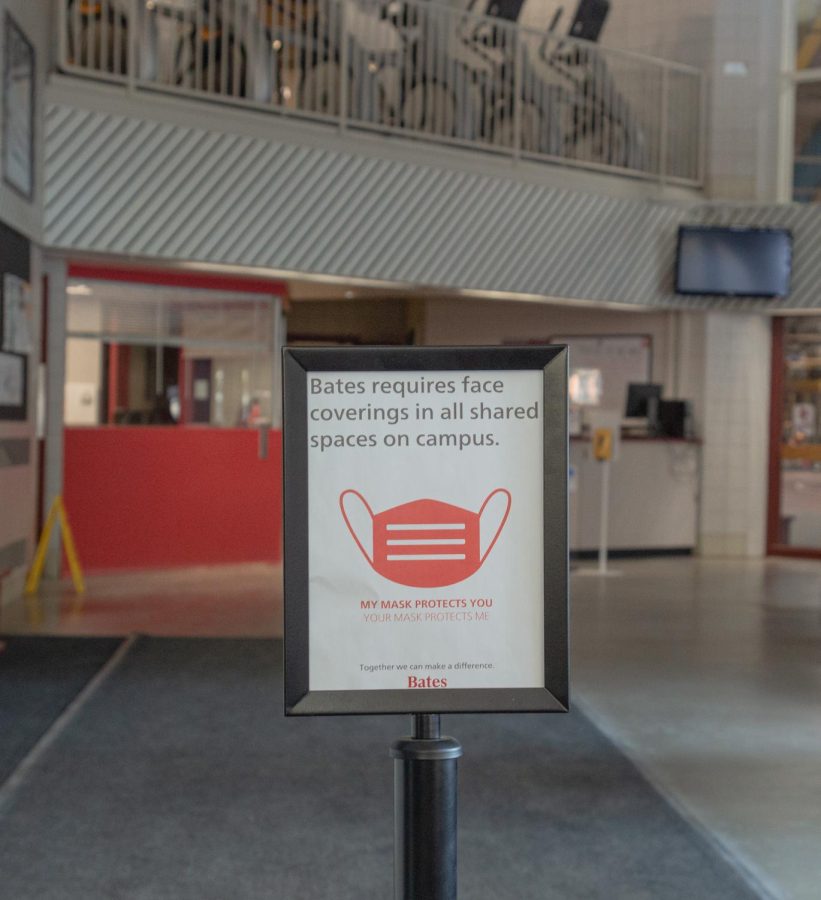 In an email sent to students on Dec. 29, Vice President for Campus Life Joshua McIntosh outlined updated public health guidelines that students were expected to adhere to upon their return to campus in mid-January. The policies, which included limiting Commons to only grab-and-go meals and restricting dorm access, were “a more stringent approach” than those of the fall, but in light of the omicron variant, they were necessary, according to McIntosh.

In the restrictions, McIntosh wrote that “students must be masked when indoors” but also said that exceptions included “when actively participating in competition and indoor athletic events.”

Kathleen King, a junior on the women’s rowing team who helped the Bobcats win the 2021 NCAA Division III Rowing Championship, said she felt uncomfortable with the masking guidelines.

“I don’t really think that it makes sense for us to practice indoors without masks on,” she said. “I think that it kind of contradicts the rest of the policies being restricted.”

Currently, the women’s rowing team is only hosting captain’s practices, which she has been participating in via Zoom.

Though King is in favor of all students – even athletes – wearing masks indoors, she did acknowledge the difficulties that it posed.

“When your mask gets wet, it starts to [be pulled into your mouth] when you breathe,” she said. “It does feel very suffocating. Because we’re indoors and we’re working out, the room gets steamy. Your mask gets wet and it gets much harder to exercise as the practice progresses. And once your mask is wet, it’s less effective.”

Isaac Williams, a junior who is not on a sports team, said he believed the problem to be that “students are noting a very valid double standard, and unfortunately, as a result are becoming agitated and frustrated at the administration and even athletes.”

“It was foolish to begin winter sports in this manner, as it may end up undermining the preventative measures the school was trying to take,” Williams said. “People will be angry about this double standard and consequently less likely to comply/make good choices out of vexation.”

Williams believes that the best decision should have been to pause sports “while we get through the uncertainty of returning to campus amidst omicron, and once things have started to level out more, allow the athletes to resume unmasked as was planned.”

Currently, Bates requires student-athletes competing against its teams to participate in a surveillance testing program, according to the college’s spokeswoman Mary Pols.

“Each institution will determine their own surveillance program based on their institution, state and local guidance with transmission risk,” Pols told The Student.

Last Tuesday, the men’s basketball team hosted University of Maine Farmington (UMF) players at Alumni Gymnasium. The university’s surveillance program guidelines state that fully-vaccinated students who remain asymptomatic are not required to submit to COVID-19 testing, though according to the Centers for Disease Control and Prevention (CDC), vaccinated students who are indeed positive for the virus might not show any symptoms.

Isabel Honigman, a senior dance major, expressed her frustration about the difference in guidelines for athletes versus students that participate in the arts. She told The Student that she “wasn’t really surprised” about the guidelines.

“I worked [in] the gym for the last two years and I am used to athletes receiving preferential treatment at Bates,” she said. “If the goal is to mitigate the spread as much as possible, it does not make sense to me that while athletes are in contact with students from other schools they [do] not have to wear masks.”

Though she said wearing masks while dancing is “not ideal,” she said that “all dancers and performers did it last year without any complaints.”

Additionally, Honigman pointed out that while she and other non-varsity athletes were required to wear masks in the gym, athletes practicing with their team can remain mask-free.

“When other students can be in the weight room and have to be masked while watching a team workout together unmasked [it creates a divide],” she said. “It also makes the job of the students who work in the gym harder because they have to tell certain students to keep their masks on while watching other students work out maskless.”

Similarly to Williams, Honigman said she believes that the best policy “is consistent for all students.”

“I think that athletes and performers should not have to mask while they are actively playing in a game or performing,” she said. “However, I think in practices and rehearsals, everyone should be masked.”