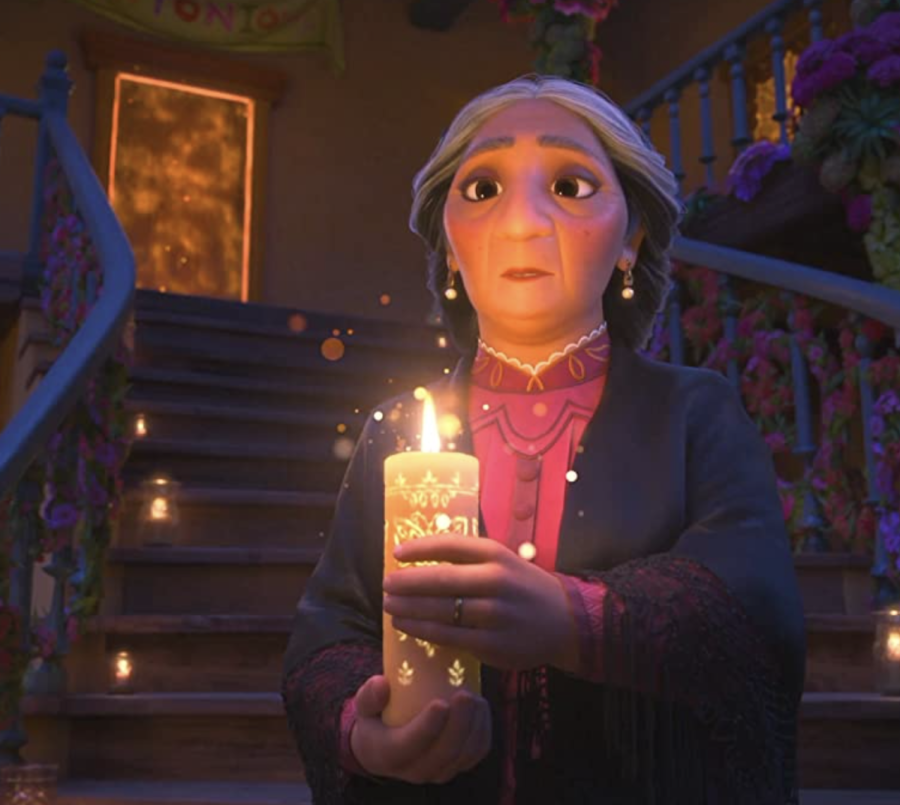 The movie is an commentary on generational trauma and the perils of meritocratic expectations, personified by Abuela Alma, pictured above.

“OMG,” wrote one commenter on a TikTok video that I recently saw of a toddler dancing to the soundtrack from “Encanto.” “I totally forgot there were KIDS watching this, not just traumatized adults.”

It is high praise to say that a Disney film — which, as an empire, is specifically notorious for its children’s stories — is so captivating that adults think it’s designed for them. It is, however, praise that I think is well-deserved.

When I saw “Encanto” with my sister over winter break, we were enthralled by the gorgeous animation, the beautiful songs and the intricate characterization. We whispered to each other, tracing motifs and metaphors that arced through the entire movie. We hotly debated who the villain was (consensus: generational meritocratic pressure personified by Abuela Alma) and how much blame each family member should shoulder for upholding the hurtful system (consensus: never reached).

Teenagers and young adults can enjoy “Encanto” just as easily as children can. If the sheer number of analytical videos made by college students and parents is any indication, the film is undeniably already loved by older audiences.

The story follows Mirabel Madrigal, a 15-year-old girl living in the mountains of Colombia with her extended family. Years before, Mirabel’s abuelos Alma and Pedro were forced to flee armed conflict. Pursued by soldiers, Pedro gave his life to protect his wife and the other refugees. His sacrifice imbued the candle that Alma held during their escape with magic.

Since then, every member of the Madrigal family, beginning with Alma’s triplets, has received a magical gift when they turn five years old. Mirabel’s mother, Julieta, can heal any ailment with food, and her aunt Pepa controls the weather with her mood. Her uncle Bruno (yes, from that one song you know from TikTok) could see the future and delivered prophecies until he one day disappeared. Mirabel’s eldest sister, Isabela, can create beautiful flowers, and her older sister, Luisa, has super strength. The sisters’ three cousins are gifted with shapeshifting, animal communication and extra-sharp hearing, respectively.

And as for Mirabel’s own gift? Well, with a shrug indicative of the way most of her family treats her, Mirabel’s cousin tells the gaggling kids on screen (and in the movie theater): “Mirabel didn’t get one.”

At first, Mirabel doesn’t mind being giftless. She’s still a member of an exceptional family, with a magical home in beautiful mountains. But things are not as cheerful as they seem. When the family’s magical candle begins to flicker, Mirabel sets out to try to save its magic.

It’s a perilous task — especially for the only average child in a family that alienates her for her normalcy. But she eventually succeeds, managing to preserve the family’s magic and simultaneously remind her community that there is a kind of magic that’s more important than super strength or controlling the weather. Mirabel is shown to be the glue holding them all together. As Abuela Alma finally comes to her senses, she turns to Mirabel and sings, “The miracle is not some magic that you’ve got. / The miracle is you, not some gift, just you.”

That verse marks a turning point for Abuela Alma, who is — if anyone is — the film’s villain, albeit a traumatized, well-intentioned one. The movie is a clear commentary on generational trauma and the perils of meritocratic expectations, personified by Abuela Alma. For most of the film, she is so insistent that her family “earn” their magical gifts that she demands they exhaust themselves supporting the community. She tolerates no individuality.

Mirabel’s mother, Julieta, labors all day in the kitchen, wearing herself down so she will have the power to lift up others. Similarly, in one obviously-symbolic shot, Luisa is shown using her super strength to literally hold up the Madrigal house and the community that surrounds it during her song “Surface Pressure.”

All of this pressure gets to the Madrigals. It takes a major epiphany — complete with a song and a dance number titled, “What Else Can I Do?” — for Isabela to realize that everything she makes doesn’t have to be flawless. Isabel laughs, “What could I do if I knew it didn’t need to be perfect / It just needed to be,” only for Abuela Alma to scold her for the mess she’s made.

Camilo, the shape-shifter, is implicitly told that he is helpful only when he is not himself. Likewise, Luisa faces a major identity crisis and asks, “Who am I if I can’t carry it all / if I falter.” What overachieving high schooler taking six AP classes at once in search of academic validation and self-worth among us can’t relate, at least a little bit, to that?

By the end of the film, it is a major revelation for Mirabel to tell her family that “you’re more than just your gift.” Isabela makes more imperfect cacti, Luisa relaxes in a hammock and, like all good fairy tales, “Encanto” has a happy ending.

That is not to say that everything is all hunky-dory with the way the movie ends. As a commentary about generational trauma, “Encanto” succeeds resoundingly. When taken as a fairy tale, it’s a little more iffy. Most obviously, there’s something strange in the pacing — the end of the movie rushes up incredibly quickly. And there are some questions left unanswered by the film’s wrap-it-up-in-a-neat-bow ending. For example, the origins of the magic and how, exactly, Mirabel pulled her miracle off.

This is not to say that the pitfalls of “Encanto” outweigh its peaks; rather, there are beautifully redeeming moments. The cross-section of Latin American diversity is striking and well-done. A vast variety of skin tones dot the screen. The animation is stunningly beautiful. The movie fairly portrays Colombian history: Abuelo Pedro’s death likely occurred in reference to the five-decades-long “warfare between leftist guerrilla groups, right-wing paramilitaries and government forces” that has marred Colombia since the mid-20th century, but the violence doesn’t become the beating heart of the film.

And, the music — oh, the music! The soundtrack ousted Adele from the No. 1 spot on the Billboard chart, and rightfully so. We all know “We Don’t Talk About Bruno” and “Surface Pressure” from TikTok. Though they are the standouts of Lin-Manuel Miranda’s incredibly catchy soundtrack, the movie is dotted with several more. Golden Globe-nominated “Dos Oruguitas,” in particular, brought me close to tears. (Give it a listen, and have your tissues ready.)

In the end, “Encanto” is a triumph. Its multifaceted characters and nuanced message, which are held to a backbone of beautiful storytelling and one of Disney’s best soundtracks, far outweigh its iffy pacing and incomplete ending. It is dotted with complex and nuanced symbolism (if you watch it and can figure out what the motif of fire symbolizes, text me) along with simple yet profound messages.

At its heart, “Encanto” is a coming-of-age story, culminating in Mirabel discovering her own beautifully normal gifts for love and connection. “See yourself in turn,” the last song pleads. Unlikely though it may seem for a Disney kids’ movie, “Encanto” has the potential to have a lasting impact on all of its audiences.