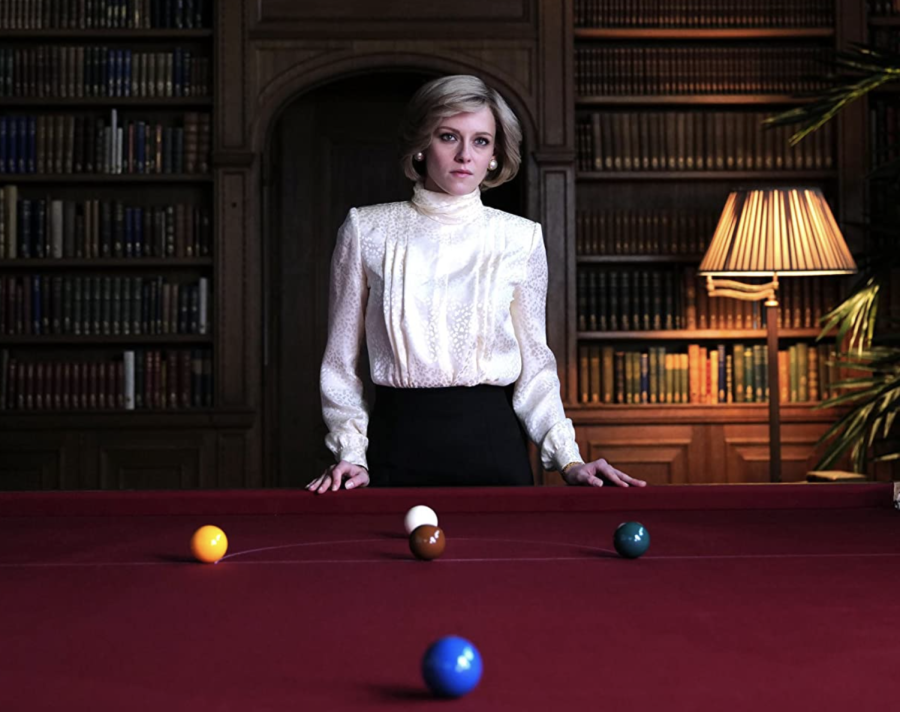 The newest version of the story of Princess Diana, “Spencer,” is an honest distortion, a best-guess, at Diana’s psyche, rather than a familiar re-tread of the Diana story.

There are hundreds of professionally made documentaries, shows and movies that each try to uniquely extrapolate on Princess Diana’s tragic death and her tortured experience among the ranks of the modern British Monarchy. Some of these endeavors succeed. Some do not. Famous productions such as Netflix’s “The Crown” or blockbuster triumphs like “The Queen” — no shortage of inventive names there — have exhausted Princess Diana’s story.

The latest development in Hollywood’s directorial race to assert conclusions about what Princess Diana really struggled through — what really happened in the hallowed halls of those private royal estates — comes in the form of Pablo Larraín’s “Spencer,” starring Kisten Stewart. But this time, anglophiles and art critics alike can find solace in the film’s elegant delivery.

The first thing we see are the words “A fable from a true tragedy,” Larraín’s personal note to his audience. The warning reads in stark typeface across the screen. With interludes of brief monologue, dissident Baroque melodies steadily crescendo. The world of the film is bleak.

Next, Larraín takes watchers through a 1-hour-and-51-minute fever dream. His Princess Diana dances, runs and paces through an anxiety-ridden self-destructive spiral. “Spencer” is set over a three-day period, when the royal family meets for their celebration of the Christmas holiday.

Larraín recalls infamous Princess Diana narratives, but he doesn’t evoke them simply for commercial success. One scene shows Prince Charles, played by Jack Farthing, and Diana situated around a metaphoric game of Snooker. They exchange tense words about how Diana is to split herself into two people. Charles explains that one version of Diana is to be the private role she takes on in the family. The other version is to be the one filled with aesthetic concessions — her public self.

A similar conversation can be watched in the most recent season of “The Crown.” And, while both productions recall historically factual encounters, their goals are much different. “Spencer” understands it is not an absolute retelling of Princess Diana’s life. Instead, the film pays tribute without misconceived speculation.

“Spencer” makes clear its position as an untraditional Diana story. Larraín’s Sandringham House, the palace the royal family spends Christmas in, is carceral. Most of the movie is shrouded in what I can only describe as the coldest sunlight one could imagine. It is often hard to decipher between reality and fantasy.

In “Spencer,” there are no typical ill-fated Princess Diana story tropes. There are no cries of “death by fame.” It is an honest distortion, a best-guess, at Diana’s psyche. The movie’s namesake is itself an indication of Larraín’s intentions, as Spencer is Diana’s maiden name. The title strips the princess back to embody her previous life — untouched by fame, pressure or expectation.

The male gaze pervades both pictures. For “Spencer,” Diana, through the royal establishment, and more curiously her husband, is told what to wear, how to act and how to look. We see Diana struggle with an eating disorder to which Charles has no empathy. Every move Diana makes is watched, studied and surveyed.

It is with Stewart’s portrayal of Diana that “Spencer” becomes a profound success. At first glance, the California-cool Stewart typically brings to the screen would seem counterintuitive for the regal demands of Princess Diana. The opposite is true. Stewart brings all the rage, the strong-headed angst and the quintessential Diana mannerisms to boast a beautifully complex portrayal of the “people’s princess.” Her Diana is not too sharply accurate nor too actorly. An Academy Award most certainly should be in the conversation.

Diana would have been 60 this year. The number of productions surrounding her life and death, I’m sure, exceed that number. “Spencer,” however, was clearly art. It did not position itself as a documentary or best-selling story.

“Spencer” is an ode and a simple goodbye. The final scene delivers us to Diana in London. She is no longer in the foggy countryside. Her boys are by her side. They eat fast food. They are somehow free of Charles, free of the British ruling class.

Princess Diana, or perhaps more accurately now, Diana Spencer, gazes out over the Thames River. She is finally at peace.

The film seems to say, “How much more are we going to try and exhume Diana’s body?” Give her rest.