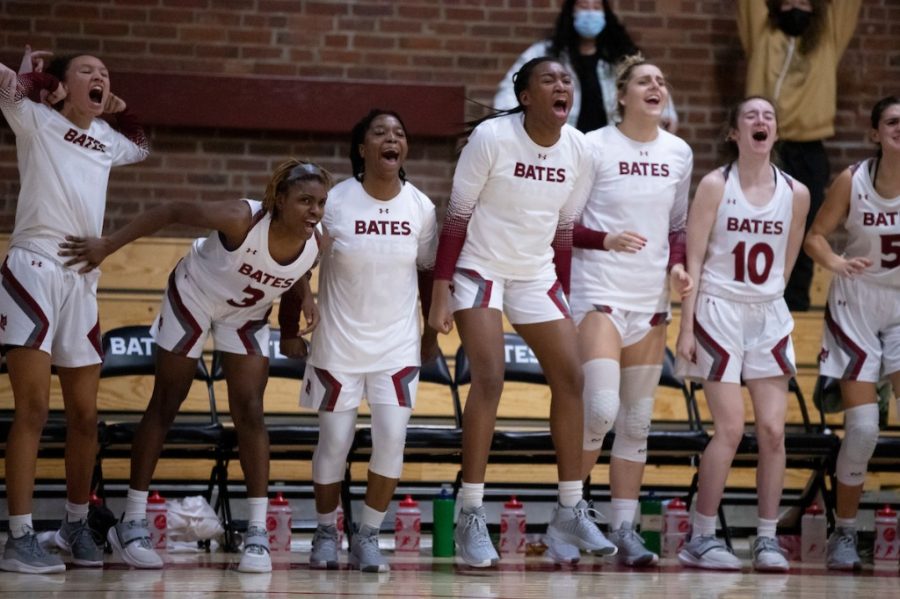 The women’s basketball team celebrates during their dramatic and impressive win over No. 3 nationally ranked Amherst on Friday night.

The Bates women’s basketball team is making waves this season, both within the NESCAC and nationally. After a 2-0 weekend in which they easily handled Amherst, the No. 3 team in the country, it’s looking like the Bobcats will be nationally ranked and well on their way to the best Bates basketball season in recent memory.

It all starts, in my opinion, with the Bobcats defense. Ariana Dalia ’22 anchors the paint for this team, and I believe she has a real shot at NESCAC defensive player of the year. She does such a great job of sliding her feet, and her strength allows her to stand her ground against larger offensive players who try to overpower her near the hoop.

Bri Gadaleta ’23 and Taylor McVeigh ’22 are also able to hold their own in the painted area; both of these bigs do such a great job of being disciplined and keeping their hands straight up on drives, not allowing the refs to bail out the offensive players with a foul call.

On the perimeter, Mia Roy ’22, Meghan Graff ’23 and Morgan Kennedy ’24 are each solid defenders. They all slide their feet well and are able to guard bigger players.

Most important, though, is the emphasis that this team places on help side defense and defensive rotations in general. They are truly connected out there, and the communication between them is on point. The guards pressure the ball on the perimeter, and when they do get beat off the dribble, they have a host of bigs ready to send those shots out of there.

Overall, the team is well-rounded, and they don’t just do it on the defensive side of the ball. They have multiple players who could, on any given night, be the leading scorer for this team, which is not something that many teams can say. Graff, Roy, Gadaleta or Kennedy could feasibly lead the team in scoring, and that’s what makes them so difficult to gameplan for.

Furthermore, Bates has been unbelievable on the offensive glass this season; they’re first in the NESCAC with 16.9 offensive rebounds a game, and the bigs — Gadaleta and Dalia — are to thank for that. They’re both so aggressive following missed shots, and the second shots that they create for this team go a long way in making them the third leading scoring team in the ‘CAC.

Steph Baxter for Player of the Year

Despite the early season struggles of the Bates men’s team, Steph Baxter ’23 is a real bright spot. And, if the team can turn it around, he’ll have a real shot at being NESCAC player of the year. He’s leading the NESCAC in scoring (!) with 21.4 points per game, which is especially impressive considering the amount of attention he garners from opposing defenses.

Even though everybody knows he’s the focal point of the offense, Baxter’s still able to get to his spots and find success on the offensive end. He’s quite simply the most talented player I’ve seen in the NESCAC this season.

What makes him so special is the number of ways that he can score; Baxter can shoot the three ball (both off the catch and off the dribble), he can get to his mid-range pull up and he can get all the way to the rim. His shifty yet controlled ball handling allows him to glide past defenders, and his ambidextrous finishing ability makes him really tough to handle at the hoop.

Baxter has had some special lefty finishes this season (which are my personal favorite moves of his), and as defenses get more and more concerned with his driving ability, I think his shooting numbers will only continue to rise. Oh, and by the way, when he gets fouled — which is quite often — he makes 85% of his free throws, good for sixth in the NESCAC.

Will Baxter win POTY? I think that depends on how the team finishes the season. Regardless, he’s having a special season and deserves to at least be in the conversation.