“The One-Act Play That Goes Wrong” Was a Successful Disaster 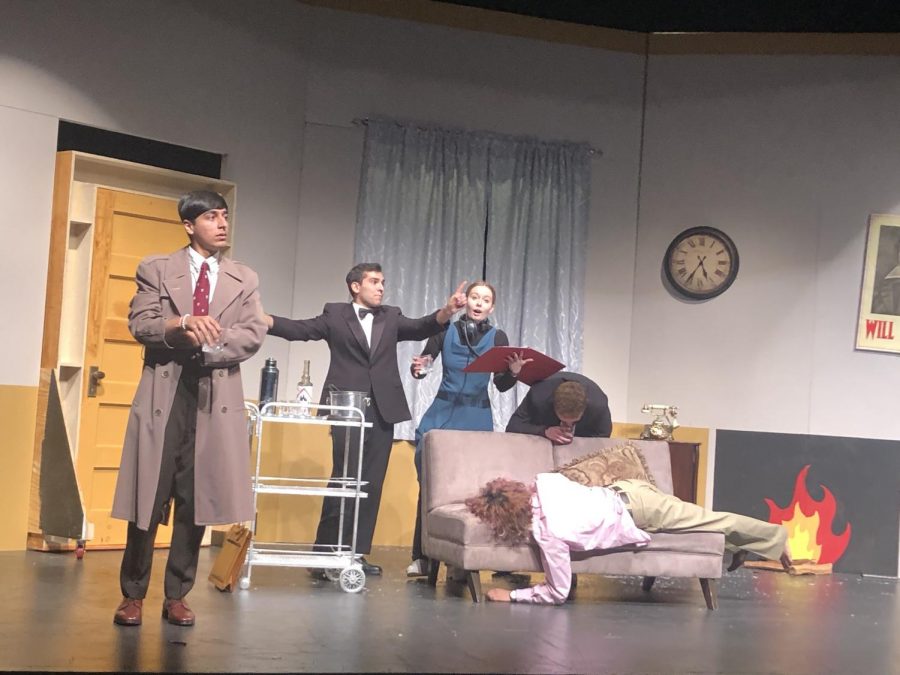 Note: Robby Haynos is the assistant arts and leisure editor of The Bates Student.

The Robinson Players’s production of “The One-Act Play That Goes Wrong,” which ran from Dec. 3 to 5, was one of those rare but delightful occasions where I felt gleeful in laughing at mishaps. For an hour and 15 minutes, the Schaeffer stage was overrun by (choreographed!) mayhem in every sense imaginable: From falling set pieces to forgotten lines, the Robinson Players’s production of the chaotic comedy play was a resounding success.

The story of “The One-Act Play That Goes Wrong” — if it can be considered to have a story — is structured as a play within a play, with the actors portraying members of the Cornley Polytechnic Drama Society putting on a production of the fictional play “Murder at Haversham Manor.”

Cornley Polytechnic’s six “actors” and two “stagehands” struggle to keep the play on track as more and more things go wrong, from forgotten lines to lighting and sound mix-ups to the set quite literally falling apart around them.

The play was brilliantly directed by Robby Haynos ‘22 and stage managed by Jiayi Yang ‘25, who had a job I can barely fathom trying to organize madness. She succeeded resoundingly.

The Robinson Players took the idea of errors and mistakes to its extreme in meta ways that transcended the stage itself. From the moment the audience enters Schaeffer Theatre, it is clear that something is not quite right. Onstage, two supposed crew members are hurriedly fixing broken set pieces. The programs are printed upside down. A pre-show speech is interrupted by a wobbly spotlight.

Only after all of this pre-show chaos does the theater descend into the mid-show chaos; the boundary blurring of the real and the scripted was a fantastic and hilarious treat for the audience.

The cast of the production was stellar. Dhruv Chandra ’25 plays a hilarious “Chris,” a harried director-slash-cast-member of Cornley Polytechnic with a flair for the dramatic. Chandra embodied his character phenomenally well, staying in character for pre- and post-show speeches and holding himself well.

Then there was John Wilkins ’23 as “Jonathan,” the actor who plays the murdered Charles Haversham but consistently struggles to act dead. Wilkins has a gift for amusing-but-not-overdone physical comedy, and his twitches and stirs as the restless “Johnathan” vainly pretending to be dead were particularly amusing.

Joining “Chris” and “Johnathan” were the Cornley Polytechnic actors “Max” (played by Joaquin Torres ’25) and “Sandra” (played by Shelby Armor ’24), who both bring joyful comedic flair to the stage. Torres is a fantastic comedian with the perfect blend of vocal inflection and physical accuracy. Armor is remarkably gifted at capturing the flair of an overzealous spotlight-seeker like “Sandra,” breaking from delivering lines to strike a pose in a way that any audience member at an amateur drama production will recognize.

Of particular note was Sydney Childs ’24 as “Annie,” a Cornley Polytechnic stagehand who is shoved onstage to take over for “Sandra” after she is knocked unconscious. Childs gives “Annie” a hilarious and noteworthy arc, from stumbling confusedly onstage with an oversized script (marked “Twelfth Night”) in her hand to eventually getting into a physical fight with “Sandra” for the role. Like Armor, she is a gifted physical comedian, and the two had some good fight choreography.

Joining “Annie” as a stagehand is “Trevor,” played by Noah Jaffe ’25, who is equally humorous during his time onstage.

The two true standouts, though, are David Walker ’24 as “Robert” and Ali Sheikh ’23 as “Dennis.” Walker gives “Robert,” an overdramatic Cornley Polytechnic actor who gets bruised, battered and worn down throughout the course of the play, some hilarious moments in the spotlight.

By the end of the play, dazed and defeated, “Robert” was reminiscent of Jack Torrence, the dad from “The Shining.” Walker played his role flawlessly, capturing the cadences of an overzealous actor as well as showing his collapse perfectly.

Sheikh was “Dennis,” a confused young Cornley Polytechnic actor who, among other things, is conspicuously confused when things go wrong and reads his lines off his hands (at one point pronouncing “facade” as “fakade,” to laughter). Sheikh’s embodiment of the character is hilariously excellent.

It was “Dennis” who kept me in stitches throughout the whole production with his visible confusion toward the havoc surrounding him. Sheikh was the standout of a truly stellar cast, all of whom brought zest, energy and joy to the stage and whose chemistry made the show what it was.

The actors, of course, were just one part of the team that brought the play to life. One group especially deserving of recognition was the technical crew. It is one thing to build a set that can stay up; it is quite another to build a set that can collapse at exactly the right moments in exactly the right ways, and the set for “The One-Act Play That Goes Wrong” was a brilliant example of the latter.

Props crumpled, clocks fell off walls and doors got jammed with excellent hilarity that was so realistic that after the show, I eagerly texted my stage crew friends asking how it had all been done — it wasn’t real, right?

The collapses were, naturally, staged — just staged brilliantly well — but they were indicative of a very difficult goal that the Robinson Players absolutely nailed: making the rehearsed look unrehearsed. This is the goal of every play, of course, but it takes on a particular potency when things are supposed to appear as if they are literally falling apart when they’re actually the result of careful precision.

The actors stumbled over their lines, interrupting each other and repeating passages in a way that was precisely choreographed, but it appeared completely natural — a testament to the actors’ precision and focus. The production aced making intensely-focused scenes look wildly out of control, which certainly wasn’t an easy feat, and yet the Robinson Players did it with aplomb.

All in all, “The One-Act Play That Goes Wrong” was a complete catastrophe in the most triumphant of ways. Rarely have I left a theater with such a huge smile on my face, and I don’t think I’ve laughed so hard, so continuously, for 75 minutes straight, as I did in Schaeffer on Sunday.