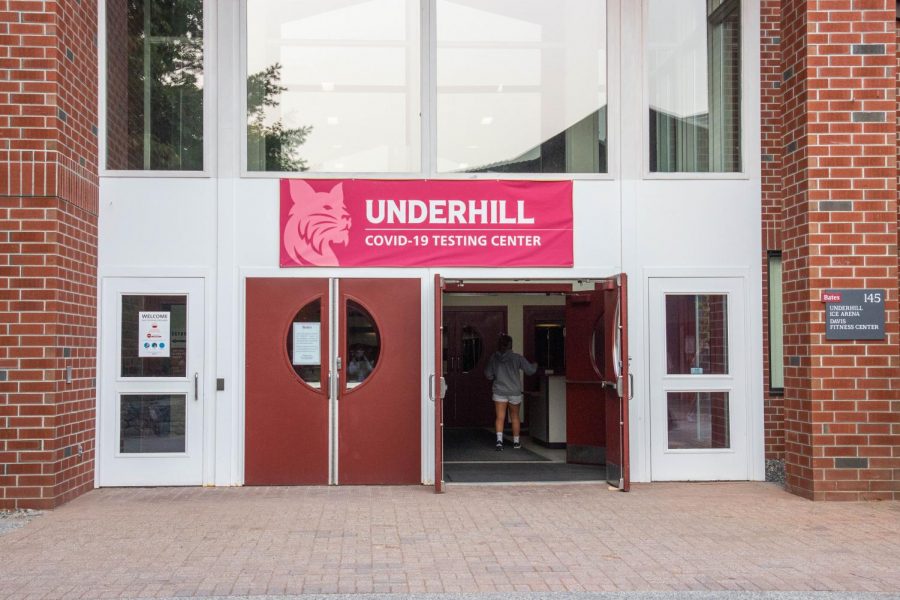 Starting next semester, Underhill Arena will turn back into an ice rink and testing will move into the Muskie Archives.

After a year and a half serving as the COVID-19 testing center, Underhill Arena will be converted back into an ice hockey rink on Dec. 15. Next semester, testing will be conducted in the Muskie Archives.

Vice President for Campus Life Joshua McIntosh confirmed the changes to The Student, and said that the college has been considering new testing sites since November.

“With an interest in trying to bring back to life as many aspects of the student experience as possible, including those in Underhill, we started to look at alternative COVID-19 Testing Center locations in November,” he said.

Those in charge of COVID-19 testing for the college were drawn to the Muskie Archives, which are located across the street from Kalperis, because “it is large enough to manage the layout…and it is an accessible space.”

The change in testing location will benefit both club hockey and varsity sports teams, as once the winter season is over, artificial turf “for training and recreation” will be put down, according to McIntosh.

Cecilia Gichner, a captain of the women’s club hockey team, told The Student that the team, which previously started a petition to gain access to the ice again, is thrilled.

“As a team we are so beyond excited to end our season back on our home ice,” she said. “It means so much more than just the convenience of being at Bates; it will allow us to double our daily practice times on ice, practice at reasonable times, and it instills such a better sense of community around our team.”

Gichner added that “as a senior, it will completely change the way I look back on my time at Bates because I will get to end my hockey career on a high note.”

The men’s and women’s teams have been practicing and playing home games at the Colisée, a local rink in Lewiston, and had been pushing the ability to return to Underhill since this past summer.

“The rink is the reason why most of us came to Bates and it’s going to be incredible to use it again after almost two years,” Gichner said. “This season we also have the best team talent-wise I have been on in my four years, and with the dedication I have seen from the team to overcome the barriers that practicing off campus emplaced, it will be amazing to see where we can go now that we will have the right resources to set our team up for success for the second half of the season.”