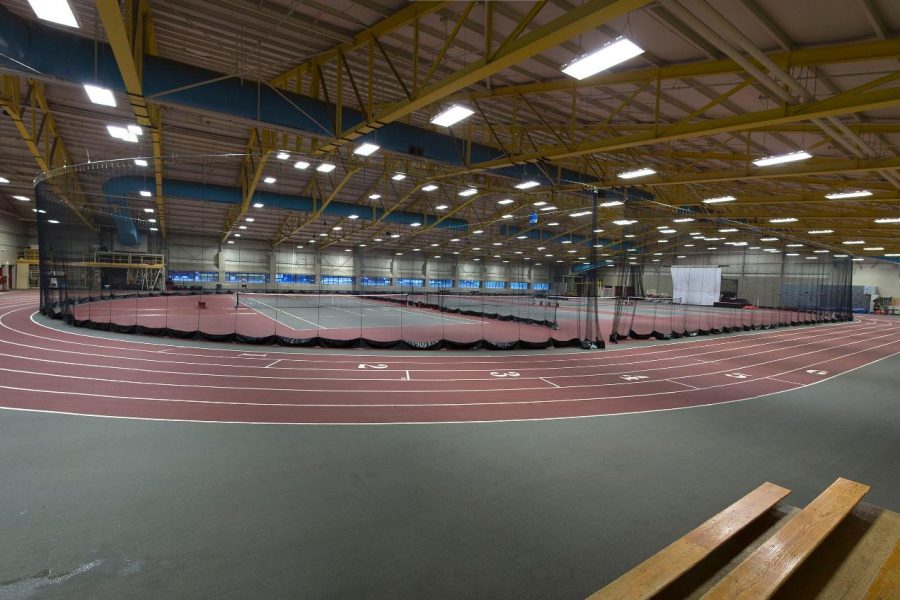 The captains of the track and field teams sat down with Student reporter Anna Cole ‘25 to discuss their hopes for this year’s indoor season.

The Bates indoor track and field team took a breath of fresh air this year—and not just because they can stop wearing masks during practices and competitions. The season, which began on Nov. 1, is their first since students were sent home in 2020.

When reflecting on the abbreviated season they had last year, Captain Liam Evans ’22 said that it “never truly felt right.” He stated, “Heading into our first season of indoor since 2019-2020 there is a lot of energy, especially with cross country coming off a very promising season.”

Captain Becca Willis ’22 pointed to the first years and sophomores, who have not yet experienced a full track season, as a source of the team’s high spirits this year.

“They’re enthusiastic and dedicated about being here, and I think that rubs off on the rest of us and gives some of us upperclassmen a renewed energy for the season,” Willis said.

The influx of new talent doesn’t end with the new teammates, however.

Evans noted, “The biggest change has really been the retirement of our past head coach Al Fereshetian, an amazing coach and mentor. Our new head coach Curtis Johnson and new assistant coaches Dan Colina and Dean Dumas bring a lot of new experience and energy to the team that has been awesome in our first week of practice.”

Captain Charlie Hansen ’22 agrees, adding that Johnson “has really made it his goal to expand our goals.”

“We always make it a priority to win the Maine State meet, versus Bowdoin, Colby, and the University of Southern Maine,” Hansen said. “But this year, we’ve focused a lot of attention on NESCAC[s] which in years prior we haven’t focused on as much…So the the challenge now is to make sure we win Maine States, but also reserve enough in the tank so that when the outdoor season comes, we have a real chance at NESCACs [this spring during the outdoor season] because historically, we’ve done well, but we haven’t done well enough where we’ve been [proud] of that. We’ve gotten fourth and fifth, but we’d like to get [first].”

Evans added, “One of the biggest goals is to have a large number of athletes qualify for the New England Championship, and hopefully a strong group of athletes will continue on to Nationals.”

Going to Nationals is also a priority for Captains Amanda Kaufman ’22 and Willis, who were at Nationals for the 4×4 relay when COVID-19 hit in March 2020.

“After making it so far and not getting to race, I want to get back more than ever,” Willis said.

“[Nationals is] always the goal for the coaches and [for] myself as well,” Kaufman added. “I’m just really excited [to] see how I progressed as an athlete over this year of not competing. I know I’m stronger and faster so I’m excited to see that, hopefully.”

If Kaufman had one word to describe the team culture, it would be “family.”

“We [have] sprinters, jumpers, throwers, distance runners….so we all kind of have our own little niche, [but] we’ve found that it all just comes together,” Kaufman explained. “It’s just kind of like a weird, big extended family [that] works out together.”

Willis agreed, mentioning that regardless of an athlete’s skills, abilities or backgrounds, “there is something there for any athlete to excel at.”

“Plus,” she said, “everyone gets playing time in [track and field], so the opportunities to offer support and cheer each other on are always there.”

Evans pointed out that this supportiveness extends beyond the track. “It can be easy to show up to practice and meetings and have that be the extent of interaction, but that isn’t the case,” he said. “Many of us study, grab meals, and hangout together. I feel a great sense of support from my teammates, and in a college atmosphere that can become very overwhelming and stressful, I am very thankful for that.”

Hansen also highlighted the team’s openness: “We’re one of the few teams that accept walk ons… I think this year alone, we’ve gotten ten new guys that haven’t even run track before, which is really awesome, and they are a huge, huge asset to us.”

Besides diversity in academic and extracurricular life, Captain Emily-Claire Duffy ’22 noted that the team has a broad range of body types. She added that many are focusing on getting stronger in the weight room.

“People also have this expectation of track and field athletes to be super skinny and small, but that really isn’t the case,” she said. “Body types don’t correlate with success in our sport, nor do they in any sport really. All our event groups spend time in the weight room getting stronger, and do long runs building endurance.”

The captains also pointed out how track and field is unique, as it is both an individual and team-oriented sport.

Hansen, whose event is pole vaulting, noted, “It’s me against the bar, it’s not me against the competitor. So I think it’s a very cerebral sport, as well as physical and mental.”

Duffy echoed that sentiment, and added, “Because of [the] individual nature of competition, [you] deal with large amounts of internal pressure and anxiety, but that’s where your teammates come in. We are always there to cheer each other on during every rep of a workout and counter each other’s self doubt. We use each other to push ourselves to be the best athletes, and people, that we can be.”

Willis agreed, “Leadership on this team isn’t loud, and while we absolutely maintain an axe to the grindstone mentality, we keep it light and supportive first and foremost,” she said. “Everyone has a job to do and an opportunity to lead or set an example, and the team shows me year after year that we choose to take care of each other before anything, with winning and setting PRs coming closely after that.”

After a difficult two years, the captains, who are currently competing in their last season at Bates, are looking to make the most of this season.

Although Willis has personal goals of making Nationals, that is not her biggest priority. “Most important to me,” she said, “is to reestablish the team after a rocky two years, enjoy my teammates and coaches while I’m still here, and leave the team settled for (hopefully) a return to normalcy next year.”

Duffy hopes to take every moment in full during her last season.

“Now that I’m a senior I’m coming to terms that after eight years, this is the last time I get to do the sport I love,” she said. “Track has brought me to so many amazing places and I’ve made my best friends because of it. This year I want to finish my season with no regrets, leave everything out there on the track for each race and really soak up every moment with my team.”