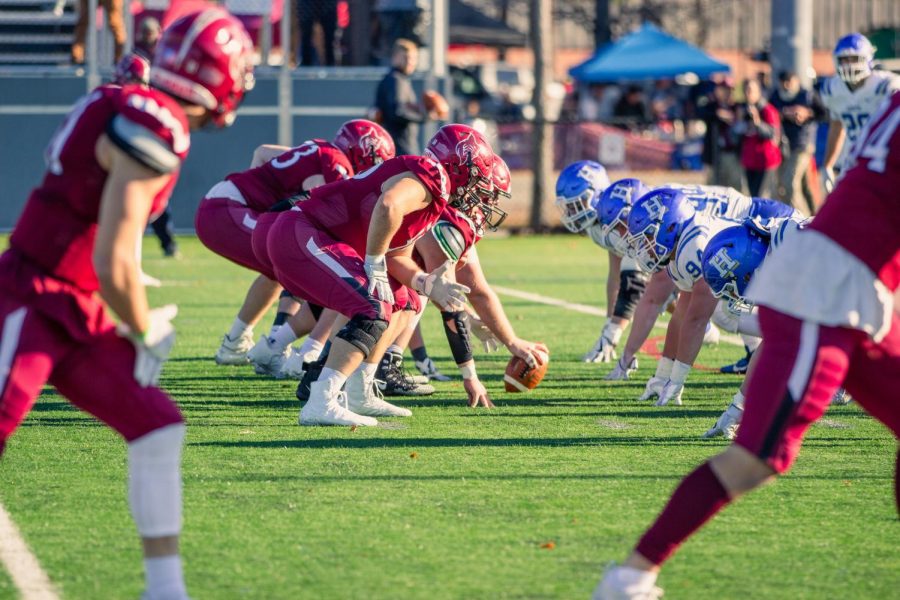 The Bobcats have their highest win percentage since 2016 following their win on Saturday against the Hamilton College Continentals.

One of the greatest athletes in history, Michael Phelps, once said, “It’s not about how you start, it’s about how you finish.” For the Bobcats, the start of the season was dismal, going just 1-6 in their first seven matchups on the year. Some were ready to close the books on the season and look ahead to next year, but interest was reignited after last week’s thrilling victory over Bowdoin. Now, with one game remaining against an unimpressive Hamilton squad, the Bobcats had the opportunity to erase the early season struggles with a strong end to the season and send the team into the offseason on a high note.

After quarterback Brendan Costa ’22 was sidelined with illness, the task of salvaging the Bobcat season would fall in the hands of freshman Colton Bosselait.

Bosselait would be making only his second appearance of the season, his only other coming in a 10-2 loss against Colby two weeks ago. Despite the lack of reps, many Bobcats had confidence in the young backup. As a junior in high school, Bosselait accrued 1,033 yards rushing and 1,113 yards passing while accounting for 31 touchdowns (18 rushing, 13 passing). The Bobcats would be in safe hands come game time.

Bosselait and the Bobcat offense would have an uphill battle come Saturday afternoon as Hamilton’s Saleh Eltayeb returned the opening kickoff 95 yards to put the Continentals up 7-0 before many had a chance to take their seats. Although the opening touchdown was not the start they had hoped for, Bates would not lay down—especially to a team whose mascot shares a name with a breakfast buffet.

The Bobcats responded immediately with Bosselait marching the ‘Cats right down the field. Due to the lack of experience at quarterback, Bates looked to utilize the running game more than they previously had.

Christian Olivieri ’22, Caleb Bolden ’22, and Chris Capo ’22 combined to rush for 30 yards on the drive, showing a new facet to the Bobcat offense. When the Bobcats did throw the ball, Bosselait was lights out, completing four of five passes on the drive including targets to Alexander Suny, giving the sophomore tight end his fourth reception on the season. The drive culminated with Bosselait pass to a Sean Bryant ’22, the senior’s sixth touchdown reception.

After Hamilton was unable to turn a 54-yard drive into any points on the board, the Bobcats took over on their own 20-yard line. Bosselait looked to continue the offensive momentum, finding Olivieri once again for a 38-yard completion that put the Bobcats inside Hamilton territory for the second time in a row.

As the energy increased among the fans at Garcelon, Bosselait found sophomore tight end Stephen Guerrette for his fourth reception of the season. The utilization of tight ends is a unique wrinkle to the Bobcat offense that made its debut on Saturday. Right when it seemed as if the ‘Cats could not be stopped, Bosselait had his pass intercepted by Hamilton’s Christian Snell ’23 to stop the drive in its tracks.

The Bobcat defense was rock solid Saturday, forcing yet another punt from the Continentals after stopping them for the second consecutive time. Bosselait continued his offensive momentum, completing back-to-back completions of 20 yards to once again put the ‘Cats in scoring position.

After a passing interference call put Bates on the three-yard line, Bosselait found Derek Marino ’22 in the endzone to make the score 13-7 in favor of the Bobcats after Simon Redfern ’22 had his extra point blocked in his return to the field after missing last week’s game.

Hamilton quarterback Matt Banbury ’23 took the field with his Hamilton offense looking to mount some offensive pressure in response to the recent Bobcat pressure. However, it was not Banbury that the Bobcats had to look out for, it was freshman running back Kamau Hopewell. Hopewell ran the ball three times, averaging five yards per carry before breaking off a 43-yard touchdown run that put the Continentals ahead 14-13.

After a Bobcat three and out, Hamilton looked to continue the offense. Starting on their own 16-yard line, Banbury pieced together a long, time-consuming drive that culminated in a fourth and goal conversion and Hamilton getting their second touchdown of the quarter and increased the lead to eight.

In desperate need of a response before the score got out of hand, Bosselait and the offense got to work. Bates got the ball back at its own 20 after a 55-yard punt and marched down the field. Facing third and seven from their own 45, the Bobcats converted thanks to a nine-yard completion to Bryant.

Bryant continued to torch Hamilton, catching a 24-yard pass from Bosselait to the Hamilton 22 yard line. Then Bosselait used his legs, scampering 13 yards to the nine yard line. On first and goal, Bosselait rolled to his right and found Suny in traffic in the middle of the end zone for the touchdown. Down 21-19, the Bobcats went for two and converted when Bosselait found senior Jackson Hayes ’22, knotting the score at 21 with just under seven minutes left in the third quarter.

As time began to wind down in the fourth quarter, the fans at Garcelon began to wonder if they would see one last Bobcat victory before the year’s end. Starting on his own 38 yard line, Bosselait and the Bobcat offense had a little magic left in them before overtime would set in.

After a holding penalty put the Bobcats further into their own territory, the challenge that lay ahead became that much steeper. Bosselait was more than willing to meet the challenge, connecting with Marino and rushing for 13 yards, giving the ‘Cats a fresh set of downs and plenty of time to try to win the game.

With just under ten seconds left, Bosselait aired out a pass that Olivieri hauled in for a 48-yard touchdown completion. As Olivieri popped up with the ball in hand, the Bates fans in attendance exploded. Bates football had once again delivered in the dramatics.

With the Bobcats win over Hamilton, they improved to 3-6 on the year, their best winning percentage since 2016. Although the season had gotten off to a rocky start, the ‘Cats were able to turn it around and deliver two complete performances in the final weeks of the season.

Although Costa was unable to play in his final game as a Bobcat, his career will be one for the history books. Costa threw for over 4,569 yards in his career, throwing for 35 touchdowns and rushing for an additional 12.

Costa will presumably pass the torch to Bosselait, who seems more than up for the task. On Saturday, Bosselait broke the single-game record for yards by a quarterback, completing 23 of 36 passes for 372 yards in the victory, surpassing Trevor Smith ’13, who threw for 361 yards against Colby in 2009.

While this season of Bobcat football wraps up, many can look back on it for the true roller coaster it was. There were highs, and there were lows. Beyond that, everyone affiliated with the Bates community can attest to the effort these players put in over a season that was surrounded in uncertainty due to the pandemic. Bobcat football is certainly on the rise, and the Bates community should expect next season to serve as a launch point for continued progress.