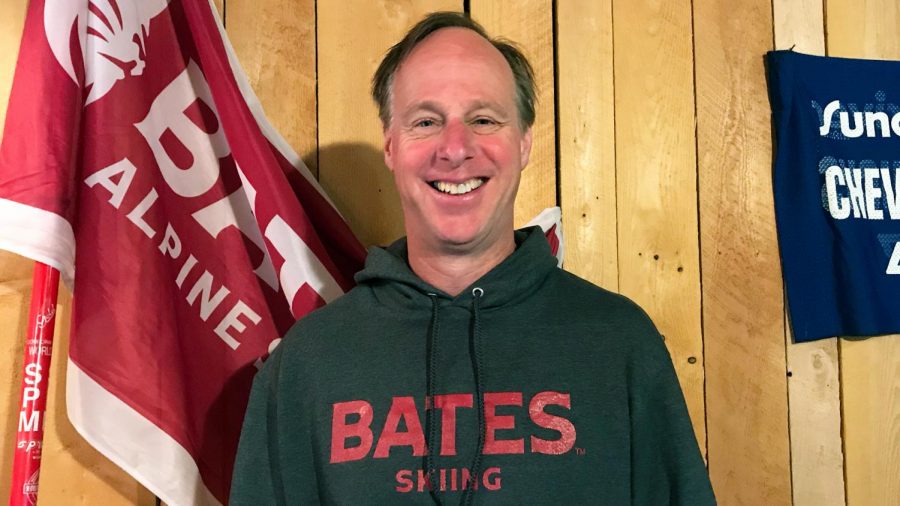 Kurt Simard has been named the head coach of the alpine ski program; last year, he had the position in an interim role.

After serving as interim head coach of the alpine ski program, Coach Kurt Simard has been promoted to hold the official head coach title.

The Bates alpine ski program competes in the Eastern Intercollegiate Ski Association (EISA) carnival circuit alongside Division I programs like Dartmouth and University of Vermont, in addition to other NESCACs.

Simard’s career highlights include working with past and current U.S. Ski Team athletes and coaches. Before joining Bates as the interim head coach in 2020, Simard was the head coach of the University of New Hampshire (UNH) alpine ski team from 1999 to 2007, where he received the honor of being the Eastern Intercollegiate Ski Association Coach of the Year in both 2005 and 2006.

After his stint at UNH, Simard served as the head coach and alpine director at Gould Academy in Bethel, Maine, from 2007-2015. He stayed at the academy as the director of competition programs before arriving at Bates last year.

Simard told The Student that he first became interested in coaching after graduating from UNH in 1991.

“When I was in my early twenties, after I graduated from college, I got into coaching and got hooked on it,” he said. “Seeing the positive impact that you can have on people through coaching was the draw.”

The coach had noticed the Bates program quite often during his career, both working at a high school in Maine and for a university that raced against the Bobcats frequently.

“I have watched the program for years from working at other schools,” he said. “My respect for the coaches and athletes was very strong; many great people [are] involved in the program.”

Athletic Director Jason Fein told The Student that he was impressed with Simard’s “demeanor and thoughtful ways of dealing with student-athletes and colleagues.”

Fein added, “We were lucky that we had him on board in an interim capacity during COVID-19. He was able to foster relationships and coordinate training that was able to happen during the pandemic year.”

That praise aligned greatly with Simard’s goals for his team. He said the most meaningful thing on his resume isn’t “what is written,” but instead the collaborations with “many great people.”

Fein believes that with Simard at the helm, the team will accomplish a great deal and continue the success that the program saw in the past couple of years.

“In the return to competition after the break for COVID-19, I hope that he will build upon the strides that the program was making in the previous couple of seasons,” Fein said. “We have a great core of skiers returning, and with proper recruiting, we hope that the team won’t miss a beat.”

Looking towards this coming season, Simard’s eyes aren’t set on any particular races or prizes, but rather what his athletes will get out of the season.

“We want to have fun, work hard, and have no regrets,” he said. “Success is related to peace of mind. We need to stay focused on the things that are in our control.”