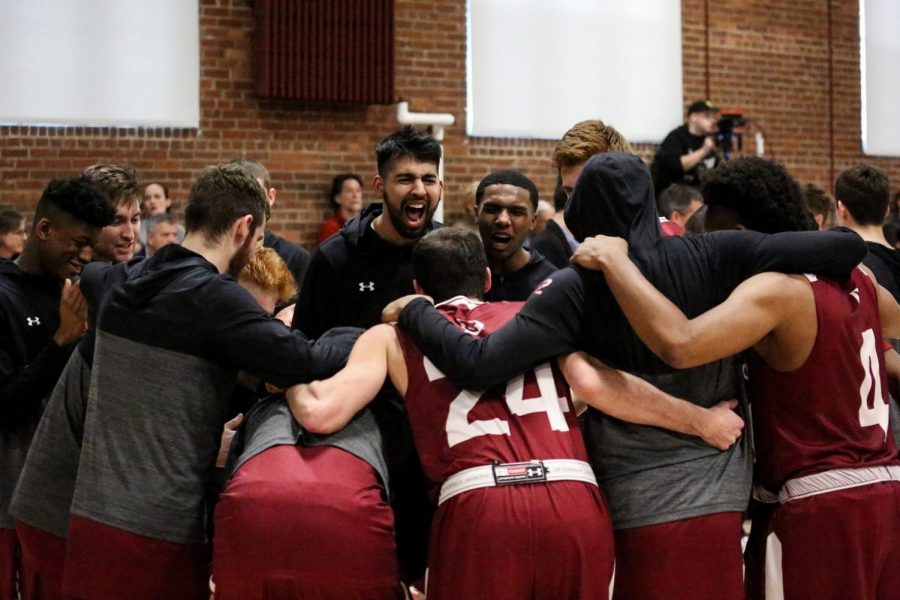 Basketball Columnist Robbie Hodin ‘22 sat down with men’s basketball head coach Jon Furbush ‘05 to talk about the team’s strategies coming into this season. Here, the team pictured during the 2019-2020 season.

While most people’s moods on campus exponentially decline as winter nears closer, my mood actually does the opposite. Because you know what winter means? Bates basketball, baby! I couldn’t wait until the season to talk hoop, so I met up with Coach Jon Furbush ‘05 this week to discuss his outlook on this season, and what came of it were some pretty cool insights. Want to hear those insights? They’re actually located on the napkin board in Commons, weirdly enough. Just kidding, they’re right below.

My first question to Furbush was whether the identity of the Bates team has changed since we last saw them two years ago. And boy oh boy, has it changed. In fact, according to the coach, there was a “100% shift” this season in terms of the things that they emphasized as a coaching staff. Last basketball season, the Bates team gave up the second most points per game (ppg) in the NESCAC, which coach says was due to the fact that they “didn’t talk much about defense, because our focus was on how we were going to score 80 points a game.”

This makes sense given the fact that Bates was led by four senior guards, all offensive minded players who weren’t necessarily defensive stoppers. This season, though, Furbush says that his guards “can get up in people, get under people, and turn guys for 94 feet,” and that the team wants to “be good at the things that happen the most, and the thing that happens the most is the other team shoots and misses.”

It’s safe to say, then, that the identity of the team has completely changed from the catch and shoot team they were in 2019-2020, and I think it could result in one of the best defenses in the NESCAC this season. The anchor of this defense will be Omar Sarr ‘23, who was second in the NESCAC in blocks in just his freshman (!) season. With increased pressure on the ball by guys who won’t get blown by easily, Sarr should be even more dominant as a rim protector this season; he won’t have to help off the ball as aggressively, and I could see him blocking even more shots as a result.

Okay, But What About the Offense?

So, we’ve pretty much got the defense covered. Pressure the ball, rebound, Omar Sarr. That’s essentially all you need to know. But what will Bates do on the offensive end this year with only two players returning who have averaged more than five points per game? The answer seems to be one of those returning players, junior Stephon Baxter. Coach Furbush specifically told me that he’s going to “have a primary focus on how many shots we can get Steph Baxter.”

Many of these shots will come in different ways than Baxter got his shots two years ago, though. Instead of handling the ball every possession, he is going to be off the ball a lot more. He’ll do this with the help of some of the younger guards on the team (Simon McCormick ‘24, Jahmir Primer ‘25, Taras Fesiienko ‘25, etc), who are all skilled ball handlers and should be able to handle full court pressure if it’s applied.

The second semester addition of Raheem Spence ‘22 will also be huge in this aspect; he’s a guy who can blow by his defender with ease and create for his teammates as well as himself, and that’ll really allow Bates to feel comfortable having Baxter without the ball in his hands. When Baxter and the other playmaking guards drive the paint and the defense collapses, they’ll have a plethora of shooting options to kick the ball to.

With the number of undersized guards on this team, you have to think they’re going to be one of the better outside shooting teams in the NESCAC. Bates will also have some phenomenal athletes to dump the ball down to in that dunker spot. Sarr, Andrew Snoddy ‘22, and Devin Harris ‘24 all have above-the-rim capabilities (to say the least), so we could be in for some hammers this season.

Bates will certainly have to figure out some things offensively. They’re going to have to find some other shot creators (besides Baxter) that they can turn to when the shot clock ticks below ten, or else they’ll be forced to rely too heavily on him. We’ll see how things develop and how the team fits together, but if they can muster up even an average offensive scoring output, Bates’ defense should be able to carry them to a winning record in the conference.