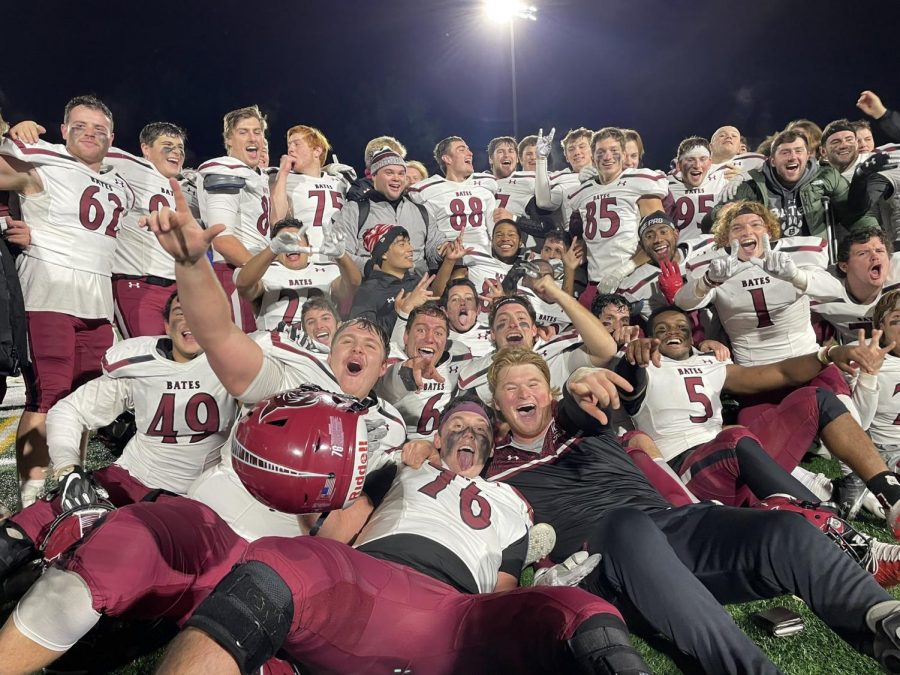 The football team celebrated their second win of the season on Bowdoin’s Whittier Field on Saturday night. The team is tied for their best record since 2016.

Mary Louise Molesworth once said, “Don’t set your expectations too high. It’s the surest way of being disappointed.” Although Molesworth died nearly two hundred years ago and isn’t particularly historically prominent, her advice has almost always been correct: rarely does an event succeed or surpass expectations. However, every so often there comes an event where it is impossible not to get excited.

The annual matchup between the Bobcats and Bowdoin College Polar Bears is such an event. There is nothing that excites NESCAC students more than watching two of the conference’s worst teams battle it out under the lights (an exception can be made for chicken nugget day in Commons).

Heading into the finale of the Bates’ CBB rivalry, every Bobcat knew what was on the line. This game wasn’t about conference championships or any sort of accolade, it was strictly about pride. Not just any pride, but the special kind that comes with saying, “We may not be the best, but at least we’re not Bowdoin.”

With such a lofty prize on the line, there would be no managing of expectations. The fact that the Bobcats had been outscored 93-30 in their past three games was irrelevant. The past was the past. The only thing that mattered to the hundreds of Bobcats in attendance on Saturday night was beating their intrastate rival. The hype was real, and the ‘Cats were ready to deliver.

On a chilly Saturday night in Brunswick, thousands gathered to witness the clash between the Bobcats and Polar Bears. Heading into the contest, both teams sported less-than-stellar records, each only winning one game on the season. While Bowdoin had a superior offense, their defense was the worst in the NESCAC, giving up an average of 28 points per game.

The Bobcats, on the other hand, boasted a much cleaner defensive record, but have consistently struggled to score points on the year. The various strengths and weaknesses of each program, combined with a raucous crowd, were destined to make Saturday’s matchup one for the record books.

After an opening three-and-out from Bowdoin, quarterback Brendan Costa ’22 took over inside his own territory, looking to secure the sixth win of his college career. From the onset, Costa was a man on a mission. On the first play of the drive, he blew past the Bowdoin defenders for a 23-yard run that put the ‘Cats in scoring position.

Costa came into this game as the leading rusher for the Bobcats, averaging nearly 48 yards per game. The next few plays allowed Bates to get in field goal range as sophomore Archie Green Jr. ’24 came on to attempt the 42-yard field goal. Green Jr., typically a punter, was attempting his first kick of the year after Simon Redfern ’22 was unable to compete.

Bowdoin took over at their own 25-yard line as sophomore quarterback Andrew Boel looked to secure his second win on the season. Paired with Andre Eden ’24, the conference’s best running back, the Polar Bears were looking to silence the contingent of Bates students that made the trip to Brunswick.

Boel ’24 utilized the running and passing game, allowing Eden to rush for 14 yards on the drive, while finding Colton Fahey ’24 three times, allowing Bowdoin to reach the Bobcat 21-yard line and convert a relatively easy field goal to put the Bears on top 3-0.

On the subsequent Bowdoin drive, they continued to apply pressure. Hoel found Aise Pream ’24 for a 35-yard completion that put the Polar Bears on the doorstep yet again. On the next play, Eden ran for a five-yard touchdown that made the Bobcats’ deficit ten.

Through the rest of the second quarter, neither team was able to mount any offensive pressure. In the next 14 minutes, the two squads exchanged eight punts, making sure that their special teams got some love from the supporting crowds. As the Bobcats went into the half down 10-0, concern began to percolate amongst the Bates students in attendance. Was this another heartbreaking chapter in the tragic story of the Bobcat 2021 football season? Was watching this performance worth driving 45 minutes and standing in the cold? Should we just compete in the NAIA? All valid questions as the teams went in for the intermission.

As the third quarter got under way, it was clear that Bates would not go down without a fight. After the teams traded punts, Costa completed a 56-yard touchdown pass to Christian Oliveri ’22 for the first Bobcat points on the day. A successful PAT from Green Jr. made the score 10-7, and the comeback was on.

The momentum had clearly swung in the Bobcats’ favor. On their next drive, Costa kept the air raid offense going, taking advantage of Bowdoin’s weak secondary. Dropping back to pass, Costa found Jackson Hayes ’22 for a 33-yard touchdown reception that put the ‘Cats ahead for the first time in the contest. Unfortunately, a missed PAT attempt would only extend the lead to a field goal.

However, Bowdoin and Eden would look to spoil the party, quickly responding with a touchdown of their own to make the score 17-13 in favor of the Polar Bears. This pressure continued into the fourth quarter, as Bowdoin scored another touchdown, making the score 24-13.

While the Bowdoin players were jubilantly celebrating on the sideline, thinking they had already won, they did not realize their crucial mistake: they left Costa and the Bobcats with too much time and Bates wasn’t going anywhere.

With just under five minutes remaining and down by 11, some were losing faith. However, the Bobcats would not back down. Bates surprisingly turned to a ground attack to move into scoring position, with a 20-yard run by Costa followed by runs of 16 and 11 yards by senior Garrett Evans. Costa then found Hayes again for his second touchdown reception on the day with a perfectly executed fade into the back right corner of the end zone.

After a failed two-point conversion attempt, the Bobcats kicked the ball back to Bowdoin down 24-19 with a little more than three minutes left. Fortunately, the Bobcat defense came up clutch as Tony Hooks ’23 made a big tackle to give the ‘Cats one last shot at taking the lead.

On the first play of the ensuing drive, Costa rolled out to his right and delivered a 50-yard bomb to Christian Olivieri ’22, putting the Cats inside the Bowdoin ten-yard line. As Olivieri hauled in the pass, the Bates supporters in attendance erupted. If nothing else, subjecting themselves to a possible case of hypothermia would be rewarded with some late-game drama.

The Bobcats were able to continue their momentum as Costa found Derek Marino ’22 for the five-yard touchdown reception. As the ball crossed the goal line, the visiting supporters were delirious. Explicit chants against Bowdoin began to percolate and no one was shutting them down. The touchdown served as perhaps the biggest moment of the season thus far, but there was still work to be done.

Bowdoin, with three minutes left on the clock, was going to attempt to spoil the Bobcats’ festivities. Because of the missed extra point, the Bobcats were only up one, and a field goal would win it for the Polar Bears.

Bates needed a stop more than Lewiston natives need Dunkin’ Donuts. As Bowdoin took over, they instantly started to dismantle the Bates defense. On the first five plays of the drive, Hoel and the Bears were able to get into Bobcat territory with a minute on the clock, more than enough time to do some damage. Boel rushed for 20 yards across two plays to get the Polar Bears in striking range for a field goal.

With three seconds on the clock, Bowdoin kicker Sean Mitchell took the field with a chance to be the hero. From only 28 yards out, the kick was all but guaranteed. The Bobcats had come all the way back from the depths of hell and were about to come up just short. The nearly 3,000 fans waited with bated breath as the sophomore kicker from Clarendon Hills, Illinois lined up his kick. As the ball flew through the air, some fans couldn’t bear to watch. However, as the ball sailed just outside the left upright, the Bobcat players and fans erupted.

Bowdoin barely had any time to process the defeat before they were surrounded by jubilant Bates students, athletes, and parents delirious in excitement over one of the greatest comebacks in recent memory. Down 11 points with under five minutes remaining, the Bobcats refused to give up and, for once, the football Gods rewarded them for their efforts.

The scenes on Whittier Field resembled that of a World War II homecoming, with players and fans embracing all over the field while the dejected Bowdoin players tried to comfort their kicker who will almost certainly be going into witness protection.

The ‘Cats’ win on Saturday marked their ninth win in ten competitions against Bowdoin and their second road win on the season. Spirits will certainly be high this coming Saturday as the Bobcats take on Hamilton College in the season finale. Although it will be hard to live up to the rollercoaster that was this match, the Bobcats proved that if you believe, anything is possible in NESCAC football.