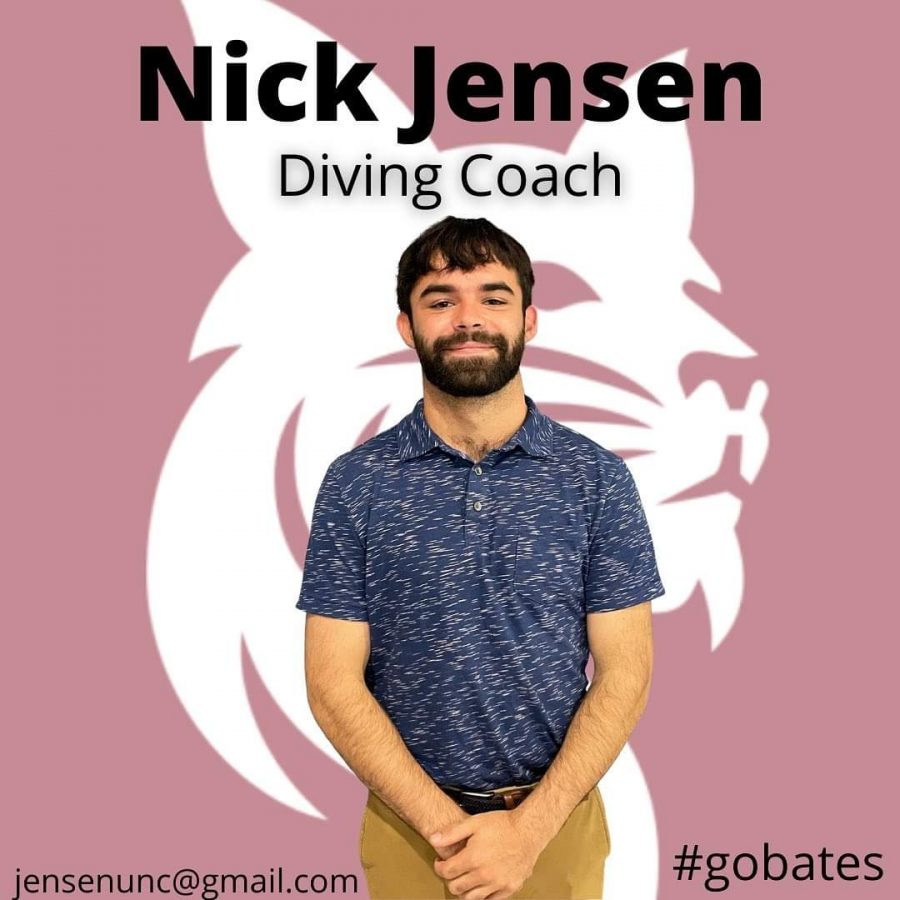 Nick Jensen is a new hire at Bates for the swimming and diving team, filling the open diving coach position that has been vacant since last winter.

He grew up in Maine, graduating from University of Maine Orono. Jensen started diving in high school as a first year when a friend suggested he try it as a winter sport, he told The Student.

“I gave it a shot, showed up for practice and I really liked it especially because I have a gymnastics background,” he said. Jensen continued to dive for four years, noticing he had potential when he qualified for the state meet in his first meet. “That moment kept me on the board,” he remembered.

Jensen continued to attend state meets and set breaking records in high school. Eventually, he learned about the University of Maine swim and dive program and joined the Division I team. Practices were rigorous, and he competed on the team for two years before he “retired” from diving to be a research assistant.

But diving was not over, as Jensen explained. “I couldn’t stay away from the pool.”

The university hosted community swim lessons, and Jensen ended up coaching a diving portion for it which he enjoyed.

“I went on to coach Bangor high school diving in 2017/2018,” he said. Jensen took a break from coaching until he saw the job posting for a diving coach at Bates, “which fit really well with where I am in my life.”

He soon began the hiring process, interviewing with multiple members of the athletics administration.

Jensen, who had around 20 jobs before coming to Bates, remarked on how the college gave an interview experience that was meaningful and created a present feeling. “They asked me my philosophies about coaching while walking around campus,” he said.

“It was a job interview but it was casual and genuine.” Jensen had previous experience with Bates; he dove in Tarbell pool in high school over the summers through club diving, and competed at Bates in meets while in college.

For Jensen, diving is a sport that “all happens so quickly.” He was initially drawn to the “really chaotic but intense and short lived moment when you’re in flight in a dive, where you have this sensation of twisting and flipping and you also have this drive to be in the moment, to perform well.”

He also loved how diving pushed him “to discipline [himself]. It is a really cool combination of mind and body.”

Coaching has been a way for Jensen to keep diving in his life, even if it may look different. For him, the “biggest difference between coaching and diving is as a diver you execute, as a coach you prepare,” he said. “Like a set designer of a play, you have to set the scene in order for the divers to execute their dives well.”

He also appreciates how as a coach, he gets to see “different representations of the sport of diving; it has many faces. I love meeting different divers because I am a diver.” Being a coach allows Jensen to connect with other divers, “more people who are like me.”

“I can make a positive impact with the people who are there,” he said. “I have the opportunity to provide a part of a good experience at college, and I would like to offer that if I can.”

It is something that Jensen has begun to do with the Bates dive team, of which he has been coaching for the last couple weeks. The swimming and diving team just had their first meet last on Nov. 6, where they came out on top against Bowdoin and Colby.

It wouldn’t be an interview with a diver if Jensen wasn’t asked what his favorite dives are. He quickly answered, “403b 100% all day on one meter, and probably 303a on three meter.” 403b is an inward 1 ½  somersault in the pike position. 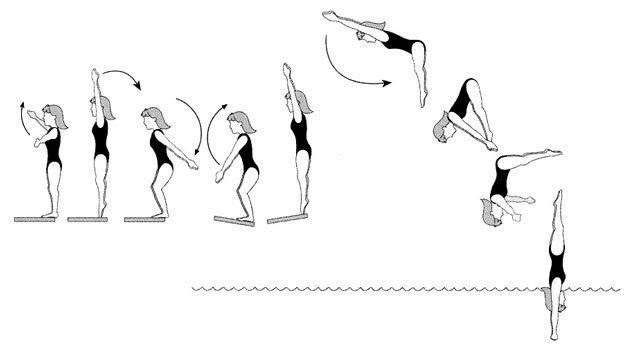 A diver completes one and a half rotations before reaching the water, with their legs straight, while bending at the hips.

“I have pretty good back presses and I’m not scared of inward, so there is no fear, and I have a pretty good spin, so I score well, it is a comfy dive for me, and I get high scores.”

A 303a is a reverse 1 ½ somersault in the straight position. The diver completes one and a half rotations in this position, with their body completely straight for the entire flight.

“I never scored high on it but I love it because it is the most unusual dive I’ve ever done and it isn’t that taxing physically, or mentally,” he said. “It is a cool sensation.”

Jensen is looking forward to the season ahead of him with the swimming and diving team, whose season is just beginning, and will run until the NESCAC championships in February.