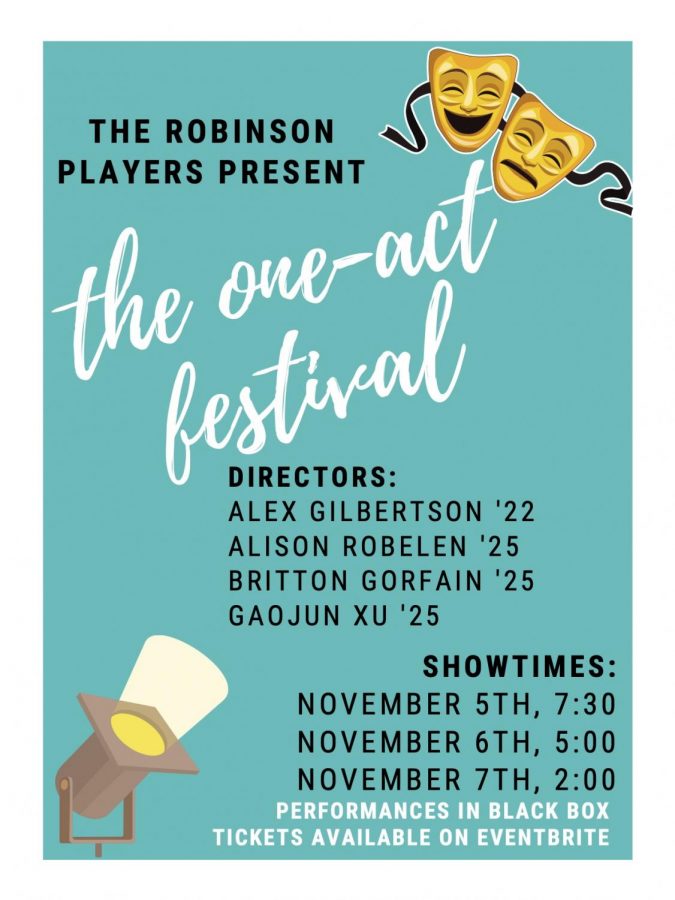 The Robinson Players presented their annual one acts festival this past weekend, featuring four plays directed by students.

This past weekend, the Bates College Robinson Players brought a joyful celebration of student theater to the stage in the form of their annual One-Act Festival. The festival, which ran from Nov. 5 to 7 in the Andrucki Black Box Theater, featured four short plays performed back-to-back, each running about 15 minutes and featuring a cast of two to four actors.

Though the plays were all written by professional playwrights, everyone else involved in the staging of the festival was a student. The Robinson Players group “takes pride in being all-student run,” according to the club’s website. From the actors onstage to the directors and stage managers behind it to the lighting designers watching from an overhead booth, the Black Box Theater was overflowing with students in all types of roles.

Each play was directed and stage managed by a different student, but several students worked on the entire festival, including Kush Sharma ‘23 as the artistic director, Lucie Green ‘23 as the sets, props and lighting designer and Olivia Dimond ‘22 as the sound designer. Each of these individuals ensured that the festival ran smoothly and that the audience’s focus could remain fully on the plays.

The festival began with “Please Have a Seat and Someone Will Be With You Shortly,” a short play written by Garth Wingfield, directed by Alison Robelen ‘25 and stage managed by Julia Parham ‘25. David and Sue, two clients in the waiting room of a therapist’s office, strike up a conversation and each ends up revealing that they have been watching and secretly getting to know the other for quite some time. They daydream about what a partnership or marriage between the two of them might look like, but ultimately go back to their established lives.

The script had its challenges; the unwieldiness of the title, for instance, was mirrored in the clunkiness of some of the opening dialogue, and the cadences of the dialogue and the arc of the play were standard, bordering on cliche, for a one-act.

The actors, however, dealt with these difficulties well. Hale Murch ‘22 as Sue and Sean Fitzgerald ‘25 as David played off of each other well, slipping into a natural rhythm with their back-and-forth dialogue. Murch was particularly stellar with her physical performance, incorporating convincing fidgets, tics and hand-wringing into her embodiment of the character.

Fitzgerald has a strong future in the department; along with Murch, he had a good sense of comedic timing and beats. I was impressed by the actors’ ability to create a strong performance out of a mediocre script; it was a testament to Murch’s and Fitzgerald’s talent as well as to Robelen’s abilities as a director.

The next actors to take the stage were the cast of Steven G. Martin’s play “153,” which was directed by Britton Gorfain ‘25 and stage-managed by Ruslan Peredelskyi ‘25. The play opens with a young man, named in the script only as “18,” and an older man, named “45,” packing their suitcases for a mysterious trip. Eventually a man named “90” barges in and the three settle down for some cryptic discussion.

Though confusing at times, the three are eventually revealed to be different versions of the same person at different ages. The characters argue about poor past choices and who has the most knowledge and experience, but they eventually manage to work together — though 18 retains a comic bit of individuality. The slow revelation and pacing were particular strengths of this play and were refreshingly unique for a one-act.

First-years Joaquin Torres as 18, Dhruv Chandra as 45 and Brandon Villalta Lopez as 90 worked together exceptionally well. The rhythm of the dialogue, squabbles and banter in this show was particularly stellar. The actors hit both dramatic and comedic beats well and their conversations felt natural. The actors’ chemistry was strong and supplemented, no doubt by Gorfain’s work strengthening their connections.

The characters all feel painfully human: Torres has a touching display of visceral emotion; Chandra shows 45’s inner turmoil well, frustration battling with compassion; and Villalta Lopez is brilliant at showcasing the emotions of a man nearing the end of his life. Though it was not specified in the script, the production gave me a post-apocalyptic vibe, a testament to Peredelskyi’s efforts as stage manager and Green’s as sets, props and lighting designer.

Next onstage was Samuel Beckett’s short play “Catastrophe.” The playbill lists the production’s four actors as co-directors of the play, one of whom doubles as the stage manager. Like the earlier play “153” but to an even greater extent, much of the plot of “Catastrophe” is conflict without context.

Stories with subtext are difficult to tell, particularly in one-act plays, but the cast of “Catastrophe” does a good job. Brendan Fitzgerald ‘23 is convincing as the Director, both in his physical acting and his voice. Shelby Armor ‘24 plays an appropriately-frenzied Assistant, scrambling around and scribbling notes with a harriedness every college student can recognize. The silent Protagonist, John Wilkins ‘23, is captivating in his limp presence; the physical demands of his role were unique in this year’s festival, and he was completely convincing. Stage manager Katie Fletcher ‘24 also gets an offstage line as “Luke,” which she delivers well. The rhythm of the banter between Fitzgerald and Armor is particularly well-done.

Finally, there was the fast-paced comedy “Women of the World” by Emma Wood, directed by Alex Gilbertson ‘22 and stage managed by Sierra Stark ‘25. In the play, three young women named Ash, Lucy and Maddi move into their new apartment, living independently for the first time ever. Though Ash and Maddi are elated, Lucy is more reserved — a hesitancy that proves valid when the evening is thrown into chaos by a spider.

Ash, Lucy and Maddi panic, unable to kill or capture the spider; eventually, Lucy calls her dad to beg him to come deal with it. Lucy’s dad says he’s deathly afraid of spiders, but her mom arrives to save the day.

The superficial plot is woven with messages of feminism and female empowerment, which at times fall flat. The subtext occasionally felt overdone, as if playwright Wood was concerned that the audience would not understand subtle undertones and therefore felt compelled to make the message explicit.

The play should have ended with Lucy telling her friends that her mother was on her way to deal with the spider; instead, the script drags on several more agonizing lines. (“Your mom’s coming? But she’s a woman!” one character protests, before the others lay out with painful explicitness that women are strong, too.) There were other metaphors that felt excessive, as if Wood did not trust her audience to understand subtlety.

The actors did their best to overcome these difficulties and for the most part succeeded. Paige Magid ‘24 as Ash, Quinn Simmons ‘24 as Maddi and Jiayi Yang ‘25 as Lucy work together phenomenally well. Their comedy beats are well-placed and their dialogue feels natural.

The physicality of their performances are strong, too: Magid is particularly amusing with her jumping and flinching every time the spider is mentioned; Yang’s vocal delivery is particularly powerful, with realistic inflections; and Simmons brings a unique and impressive physicality to the embodiment of her character. Together, these three actors have the best chemistry of any cast in this year’s festival.

Taken together, the One-Act Festival was a joyful celebration of student theater. Though each play had its strengths and weaknesses, taken together, they all provided a fun and entertaining hour of live theater.

The prevalence of first-years and juniors was particularly encouraging and spoke to a bright future for the Robinson Players, who will return later this year for several more productions. The joy and energy the company brought onstage made the festival a worthwhile experience for the cast, the crew and most of all the audience. Future Robinson Players productions are not to be missed.