Netflix’s “Maid” and the Catch-22 of American Poverty 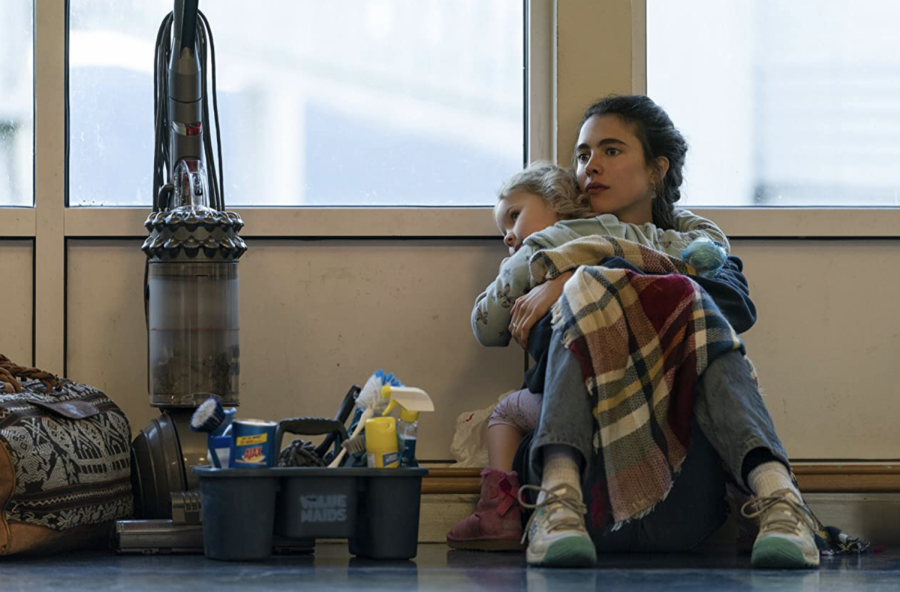 Netflix’s “Maid” stars Margaret Qualley as Alex, a single mother fleeing her emotionally abusive husband who finds work as a maid. The show explores domestic violence and the cycle of poverty in a rewrite of traditional “underdog” formulas.

The underdog story is a powerful one. An archetypal use of pathos, the underdog story succeeds as audiences empathize and identify with struggling characters. Our connection to the underdog stems from the deeply ingrained mindset of the American dream, the belief that anyone of any background has the opportunity to achieve their own version of success with determination and perseverance. We are fascinated by the notion that we control our destiny without having any external factors to hinder our potential.

Most films and television shows reinforce this collective unconsciousness within America. Audiences devour satisfying endings, the payoff where the guy gets the girl, the player finally makes the Notre Dame football team and the small-town singer wins the Grammy. We love the payoff; it’s the gratifying reward for the inconsolable tears shed throughout the viewing journey.

With the release of its new show “Maid,” Netflix continues its streak of successful limited series by redefining the underdog formula. Created by Molly Smith Metzler, “Maid” was inspired by Stephanie Land’s memoir “Maid: Hard Work, Low Pay, and a Mother’s Will to Survive.”

The show follows 25-year-old Alex, a single mother fleeing an abusive relationship who turns to housecleaning to overcome homelessness and to create a better life for her daughter, Maddy, while finding herself along the way.

Showrunner Metzler, an award-winning playwright and screenwriter who worked on “Shameless” and “Orange Is the New Black,” blurs the line between violence and assault by emphatically illustrating emotional abuse as a component of domestic violence (DV). In one poignantly written scene Alex underplays her abuse, insisting that she is not a DV victim because her boyfriend never physically hurt her. Denise, the head of the DV shelter Alex lives in, assures her that emotional abuse is domestic violence. With this scene, Metzler broadens the scope of domestic abuse and validates the experience of others who have felt neglected and alone.

Metzler paints a beautifully raw portrait of one mother’s strength as she reconnects to her love of writing. The screenwriting is poignant and emotional without becoming too sentimental. Occasionally, the show fades into surrealism to amplify the agony of Alex’s shortcomings. In particular, one shot similar to the Sunken Place in “Get Out” presents a devastated Alex sinking into her couch, paralyzed in a hole of helplessness when she returns to her abusive ex-boyfriend, Sean.

While the writing and directing are stellar, “Maid” owes a fair share of its success to lead actress, Margaret Qualley. In the first episode, I was hesitant to believe the young-looking Qualley’s portrayal of a mother, especially since she embodies the wild recklessness of the Manson children on “Once Upon A Time In Hollywood.” But by the end of the episode she not only confidently embodies the struggling Alex, but she also maintains the character’s clever sense of humor and inquisitive nature.

Qualley, a trained ballerina, lets loose in Alex’s drunken escapes and unveils her suppressed exuberance at the hands of abuse. The actress is a unique force to be reckoned with in Hollywood right now as a new generation of young actors become A-listers, including Anya Taylor-Joy, Timothée Chalamet, Saoirse Ronan, Florence Pugh, Lucas Hedges, Kaitlyn Dever and many more. With an expressive face and a dance background that allows her body to tap into a fifth gear of emotion, Qualley cements her status as an idiosyncratic young talent.

Veteran actress Andie MacDowell joins her both real-life and on-screen daughter (Qualley) in a dazzling performance as Alex’s eccentric mother who lives with undiagnosed bipolar disorder. MacDowell is a scene-stealing icon who reminds viewers of her unwavering talent. I would be stupefied if the unrestrained performance failed to receive an Emmy nomination.

The casting of Nick Robinson, famous for his titular role in “Love, Simon,” as Alex’s charming and abusive ex-boyfriend Sean is perfect. He nails the terrifying entitlement many abusers feel as past victims of neglect.

The subversion of class expectations in the show is pleasantly surprising. Alex, a white woman, struggles with poor self-image, degrading herself with insults of “white trash.” Several of the clients she housekeeps for are people of color. She even forms a friendship with a wealthy, Black woman named Regina. With this role reversal, viewers might be happy to see the empowerment of women of color, while others might be frustrated to see the narrow focus on white people’s problems.

The narrative avoids the typical melodramatic pitfalls of many domestic violence shows by illustrating an uncompromising look at what it means to be poor. The show reminds us of poverty’s structural Catch-22: as poverty-stricken people attempt to recover, factors such as mental health, gender and single parenthood exacerbate their conditions.

“Maid” redefines the underdog story by revealing poverty’s Catch-22. Because the state of Washington does not consider emotional abuse as domestic abuse, Alex struggles to seek and gain help. To qualify for government programs such as food stamps or housing vouchers, Alex needs an income. Unfortunately, she cannot get a job without paying for childcare for her daughter. “Maid” vividly displays poverty’s cyclical and systemic nature, which can oftentimes be difficult to conceptualize because of how it operates on levels of both the mundane and the overt.

Throughout the show, the consistently pragmatic Alex is determined to create a better life for her little girl. The issues she encounters on her journey derive from the frustratingly contradictory essence of the governmental structures aimed to aid poor people. “Maid” teaches its viewers about poverty’s brutality and why many victims of domestic violence return to their abusers. The financial security of abusive relationships, to some victims, outweighs the unpredictable ferocity of poverty. “Maid” is not a basic underdog story: It is a triumphant look at a mother’s journey to love herself as she fights for her family.