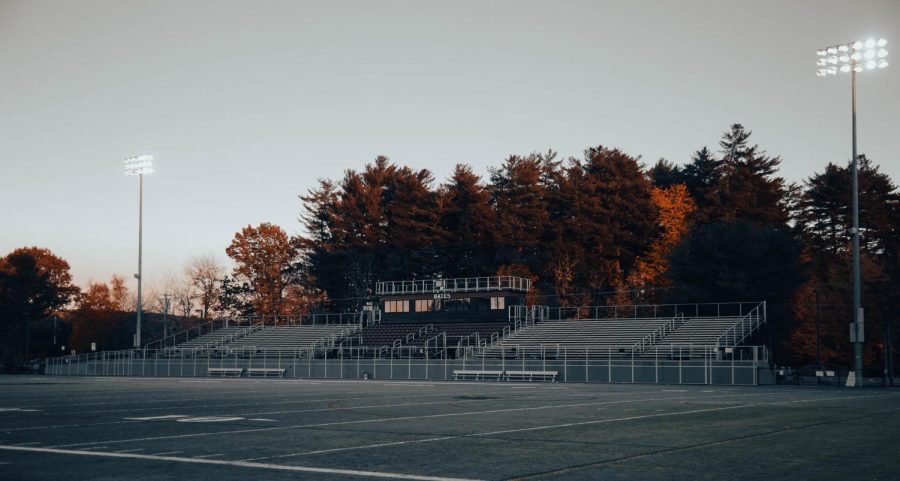 Many athletes in the class of 2024 are finding themselves needing to adjust to both a full time athletic schedule and also a new, full semester system.

The year 2020 was a unique experience for every student in the Bates community, forcing new methods of education, dining, student fellowship and athletics. Specifically in terms of athletics, the circumstances were nothing less than extraordinary.

The global pandemic has given the Bates community a new outlook on athletics, with fall sports in full swing and the impending arrival of winter and spring sports on the horizon. With that being said, there has been no progress without adjustment, especially to the athletes in the class of 2024.

Though they did not take a gap year, it is almost as if there is still a sense of “being a freshman” in terms of competing and practicing at the collegiate level, since so much of the athletic program at Bates was put on pause last year.

Not only does the full swing of an athletic season require special effort, the return of a full academic schedule gives students new challenges to navigate in juxtaposition to their sports, especially in an athletic conference like the NESCAC.

Park Penrod, a sophmore on the football team, spoke to the amount of preparation it takes not only to get ready for a college football game, but to also balance that with a rigorous course load.

Besides adjusting to a full sports schedule, it has also been difficult to learn how to work with four classes in the regular semester system as opposed to last year’s module system.

“Last year was mentally much easier because of the amount of free time,” Penrod said. “I had two classes a day and had no lifts, no practice, and no film. In contrast to this year, I mainly have three classes a day and then I have practice five days a week. On top of that, I have to make time to study and watch films in the coach’s office.”

Molly Griffin, a member of the women’s field hockey team, also felt challenged by the adjustment to a full season.

Many student athletes in the class of 2024 had to learn how to balance their work, friendships and team relationships, something Griffin experienced. Despite the challenging learning curve, the sophomore believes she has learned how to manage her time now.

“It was definitely a struggle to stay on top of my schoolwork and maintain my friendships with people who did not play field hockey,” she said. “Now, at the end of the season, I feel like I have gotten so much better at being productive and being able to use my time wisely. I had so much fun this season and I am sad to see it end, but I cannot wait for next year when I am more prepared for the time commitment.”

Cole DeMagistris, another member of the football team, welcomes the new challenges.

“It’s definitely a huge change! Last year we had the module system and no sports,” he remarked. “So it’s been a very welcomed experience that we’re now taking more than two classes and playing football. The adjustment hasn’t been too challenging, it’s just about managing your time wisely.”

“The adjustment has been mostly smooth,” she said. “Women’s lacrosse and other sports were given the opportunity to have fall ball practices with our coach, something the NESCAC does not allow in normal years.”

The fall practices have been beneficial for the team, Fowler said, especially since the program just welcomed a new head coach.

“These practices have been a great opportunity for us to meet our new coach, Renee Olsen,” Fowler said. “With far more practices and higher expectations, the transition has been a little tough, but it’s exciting since last year’s season felt almost like high school lacrosse.”

Although her team, like other spring sports, has especially early practice times, Fowler is excited to get to know her teammates more,and be on the field, playing the sport she loves.

“It’s incredibly fun getting back into the sport I love and to get to know my teammates better on and off the field,” she said. “Because the fall sports have priority with the field space, we have brutal 6 am practices. As tough as it is waking up for these workouts, they are so worth it because we’re finally playing under normal circumstances, having fun and improving. We’re all so eager to compete, especially with an awesome new coach and such a talented team.”

After a year that was challenging for everyone, bringing out the best and worst parts of society as a whole, and pretty much putting the lives of people on pause, this year offers a sense of renewed hope, especially for sophomore athletes.

Sports were sorely missed in 2020, and with the return of luxuries we became accustomed to, or even took for granted such as athletics or Commons, things might be finally looking up. Despite the challenges, there is an air of excitement and hope around Bates athletics this year that is not comparable to any other.

The overall excitement from students who are finally able to experience a real “grind” in athletics is refreshing despite how exhausting it may be, and it is becoming clear that as the pandemic continues to relinquish its grip on the world, society is finally starting to rebound one step at a time.