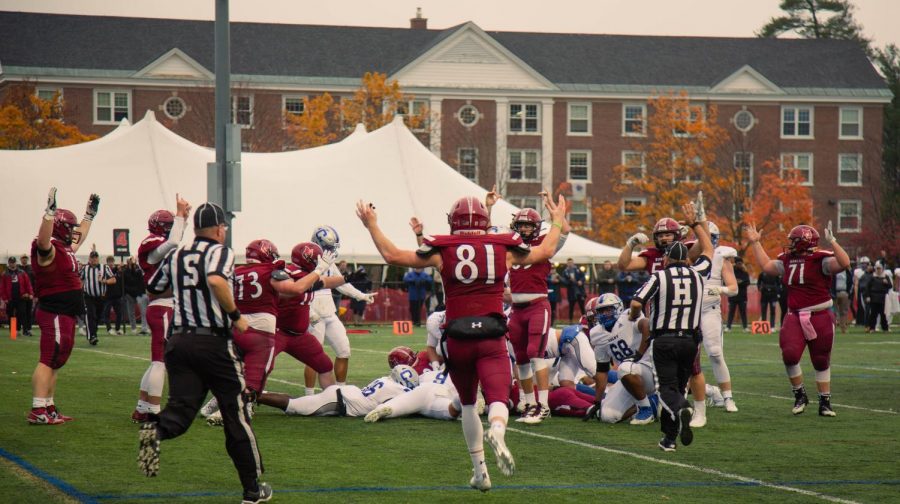 Editor’s Note: Quinn’s coverage of the Bates football program features his opinions and quips. If you have any questions or concerns about our articles, please contact Managing Sports Editor Ellie Wolfe at [email protected]

Coming off the back of two difficult games, the Bobcats looked to Saturday’s competition against Colby College as a “get right game.” Used colloquially in sports, a “get right game” refers to a contest against a lower quality opponent that serves as an opportunity to fix certain shortcomings in a team’s game.

The Bobcats certainly had plenty of shortcomings that were exposed against the conference’s highest quality teams. The defense had been absolutely thrashed, giving up 83 points across the two games, while the offense had been neutralized against Trinity, but it showed signs of life the following week against Williams. In light of these issues, Colby served as an ideal opponent.

2-4 on the season, the Mules’ weak offense lined up perfectly with the Bates defense that hadn’t been able to stop so much as a nosebleed. Additionally, Colby’s defense had been liable to give up points. Compared to some of Bates’ earlier opponents, the two teams seemed to be on relatively even footing as the Bobcats hoped to avoid their third straight loss.

On a day with weather more depressing than the pasta bar in Commons, the two Maine colleges took the field in hopes of erasing the previous weeks’ bad form and securing a victory against their intrastate rival.

From the onset, the Bobcats were in trouble. The slick conditions on the day made retaining the ball extremely difficult, as Chris Capo ’22 had the ball jostled loose on the opening kickoff and afforded Colby excellent field position to start the day.

Thankfully, the Bates defense held fast and was able to prevent Colby from securing a first down on the drive. In a dicey move, the Mules attempted to go for it on fourth down but were stymied by Tony Hooks ’23 and a rejuvenated Bobcat defense. Successful defensive plays like this one would continue throughout the rainy day.

Bates took over deep inside their own territory and attempted to continue the offense that found its legs in the second half of the previous week’s contest against Williams. Things were looking up as Brendan Costa ’22 completed a 54-yard pass to Derek Marino ’22 to put the Bobcats in scoring position. Another gutsy fourth down call saw Bates try to go for it but come up short as Costa failed to complete a pass to Christian Olivieri ’22.

Quarterback Matt Hersch ’22 and the Mules offense began their drive at their own 12 yard line, looking to put the first points of the game on the board. Despite the poor conditions on the field, Hersch was able to complete seven straight passes to drive the Mules down the field.

From the two opening drives, it was apparent that points were going to be hard to come by. Despite being at the Bobcat seven yard line, the Mules opted to kick a field goal. Moises Celaya ’22 easily converted the field goal for the first points on the day.

As the second quarter began, the Bobcats responded to Colby’s offensive surge with a long drive of their own. Costa connected with Capo and Sean Bryant ’22 multiple times, including a 32-yard reception that placed the ‘Cats in striking distance once again.

Costa was able to drive the offense down to Colby three yard line, but another fourth and goal put the ‘Cats in a precarious position. On one hand, they could let Simon Redfern ’22 make an easy field goal to tie the game. On the other, they could try to score a touchdown and take their first lead in two games. Head Coach Ed Argast elected to go for it, proving to be a costly error as the ‘Cats turned it over on downs for the second time on the day.

However, Argast’s call had a silver lining. On the next play, Tony Hooks was able to tackle running back Keon Smart ’25 in the Colby endzone for a safety and the Bobcats first points on the day.

Interestingly enough, Hooks’ safety was the first one for the Bobcats in years, and the 3-2 scoreline made its debut in a Bobcat football game. For the fans that had decided to brave the elements, the game provided little distraction from the harsh weather.

After Bates punted on the following drive, the Mules looked to add a little offensive spark to a game that, up until this point, had been as entertaining as a snuff film. Matt Hersch took this challenge head-on, rushing and throwing for 35 yards before throwing a 33-yard touchdown pass to Brendan Sawyer ’25 making the score 10-2 in favor of the Mules heading into the halftime break.

As the teams came back on the field, the fans hoped for a second half that would make sitting in the 45-degree rain worth it. Unfortunately, the defensive battle that would ensue slowed the game to an excruciatingly slow pace. Over the course of a 12-play, nearly seven-minute drive, the Mules drove the ball down the field in hopes of adding onto their lead. However, Lowell Carr ’23 missed field goal turned possession over to the Bobcats who still were looking for their first offensive points of the game.

Taking over for Costa, freshman quarterback Colt Bosselait got his first touches of the season and hoped to provide the spark the game had been missing. Bosselait became accustomed quickly, finding Derek Marino ’22 multiple times to put the Bobcats in Mule territory. Although the drive would end in a 28-yard punt by Archie Green Jr. ’24, Bosselait’s ability to perform in a game time setting was encouraging.

As the game entered the fourth quarter, the Bobcats still down 10-2, both offenses hoped to score and change the tide of the game. Unfortunately, it would seem that neither offense was willing to stay on the field. The fourth quarter saw seven punts, and numerous drives that lasted under two minutes. As the Bobcats saw their hopes wash away with a fourth down incompletion with under 30 seconds left, the defensive struggle came to an end.

On Saturday, both squads’ defenses were the highlight of the game. The Mules’ defense was able to secure their first shutout on the year (not counting the two points scored while the offense was on the field), while the Bobcats matched their season-best defensive effort, allowing just ten points. Because the defenses were so evenly matched, the game was almost certainly going to come down to one possession. Unfortunately, Colby was able to secure the lone touchdown of the game to put them across the finish line.

Bobcat fans can be frustrated by the duality of the team. On certain weeks, the defense plays a solid game while the offense is nowhere to be found. On others, the offense puts up a decent performance while the defense completely falls apart. Only on one occasion have the Bobcats been able to put on a complete performance, their win against Tufts.

Next week’s contest against Bowdoin sees the Bobcats attempting to reach .500 in their CBB rivalry games this season. The Polar Bears, like their Lewiston counterparts, have had a less than stellar year with a record of 1-6. The ‘Cats will travel to Brunswick next week as they duke it out with Bowdoin under the lights in hopes of extending their win streak against the inferior Maine liberal arts school.