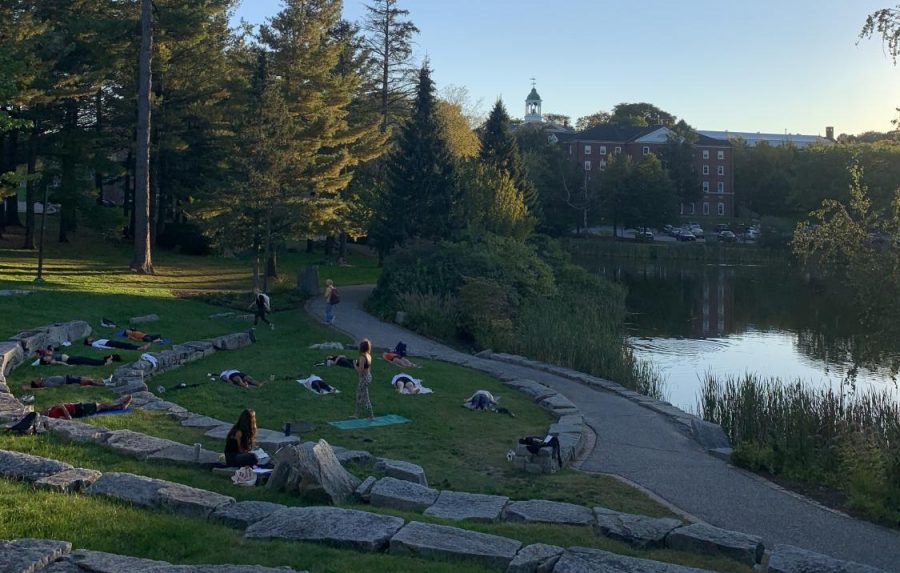 Earlier this year, Yoga Kula Club did yoga outside by the Puddle.

Bates Yoga Kula is a group on campus that hosts weekly yoga classes for students, faculty, and staff. The word Kula means “community” in Sanskrit and is frequently used by Yogis to emphasize the sense of belonging and inclusion that the practice works to foster.

Students often walked past yoga classes held on Thursdays and Saturdays at the Puddle Amphitheater during the beginning of the year. Now, classes are being held in Memorial Commons in Chase Hall. Currently, Yoga Kula has two instructors, Katia Ryan ‘23 and Elene Chamberlain ‘22. Ryan, who was introduced to yoga through her grandmother, answered some questions about Yoga Kula at Bates and her experiences.

“She completed her teacher training when she turned 70,” she said. “I think realizing it’s something you can do your whole life appeals to me.”

One thing she appreciates is that this lifelong practice is one that she can use to ground herself.

Ryan enjoys how yoga gives her the ability to pause, set her worries and to-do lists aside, and just focus on the present moment. This, she thinks, helps her navigate college better.

“I think at Bates a lot of guilt arises when you take time not to do school, or clubs, or sports, or whatever it is you belong to here,” she said. “My practice reminds me that productivity isn’t always in the doing. It’s productive to pause, to rest, to put the to-do list to the side for the moment.”

A great aspect of this practice is that there is large support for yoga at Bates. Ryan remarked about how the “community is quite beautiful. So many new faces and familiar ones fill it, which is really exciting as a teacher because it connects me with people I maybe wouldn’t have met otherwise.”

It gives her the opportunity to share this moment of pause with many others at Bates. To further cultivate Yoga Kula’s community, Ryan has some plans for the future.

“I would like to cultivate more of the club aspect of Yoga Kula and have a monthly meeting where we can come together off the mat,” she told The Student.

“I like lying down,” Ryan explains. In this pose, you lie with your arms by your sides and palms facing upwards. This is often used at the end of a yoga session to promote reflection and relaxation.

Yoga Kula classes are open to everyone of all levels and abilities. Practicing yoga helps improve strength, balance, relaxation and helps manage stress. Sessions are held in Chase Hall’s Memorial Commons on Thursdays from 4:30 p.m. to 5:30 p.m.