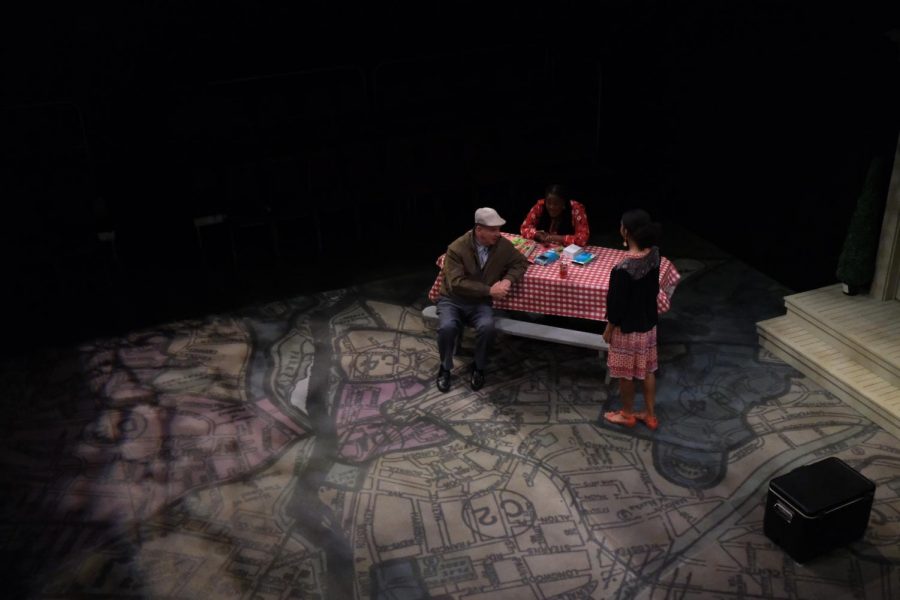 Last Thursday, Assistant Professor of Theater Cliff Odle made his Bates College directorial debut with “Luck of the Irish” by Kirsten Greenidge. The show, which ran from Oct. 28 to Oct. 31, follows two generations of the Taylor family — a Black family — as they struggle to find their place in a fictional Boston suburb.

The play begins in the present day, but flips back and forth between now and the 1950s. In the past, Lucy and Rex Taylor (played by Bora Lungunda ‘25 and Associate Dean of Students James Reese) want to buy a house in a white suburb. The last time they tried to, the Taylors were run out during the night and their house was set on fire.

So this time, the Taylors have a plan: They are going to pay Joe and Patty Ann Donovan (Lucas Allen ‘22 and Caroline Cassell ‘24), who are white, to buy the house for them — a process called “ghostbuying.” The Donovans’ name will be on the deed, and then they will privately sell the title to the Taylors and be compensated in return.

In the present day, Lucy and Rex’s granddaughter Hannah (guest artist Destini Stewart) has moved into the house with her husband Rich (J’von Ortiz-Cedeno ‘22) and their two children (Clifford Odle-Perkins, Odle’s son, plays their eldest, Miles). With the Taylors dead, a now 80-something Patty Ann (Mrs. Donovan, played by Registrar Mary Meserve) sends her husband (Mr. Donovan, played by Professor of French and Francophone Studies Kirk Read) to tell Hannah that Mrs. Donovan wants “her” house back.

What should be simple becomes complicated by one simple fact: Hannah can’t find the title to the house anywhere. Thus, there is no way to prove that Rex and Lucy’s names were ever on it, much less that Hannah and her sister Nessa (Jenna Perry ‘25) have any right to it.

While it might look complicated to follow on paper, the scenes breeze back and forth, time and space blurring together. The set helps to accomplish this as well. The stage is set up alley style, meaning that the action takes place with the audience on either side. One half of the set is the house’s backyard, and the other half is more flexible, ranging from the Taylors’ apartment to the Donovans’ home to a café. You can’t always see every actor’s face, but there is still always something to watch.

The mix of actors in the show is unusual for a Bates performance. Read has appeared in several theater department productions in the last few years, most recently “Grand Concourse.” In my four years at Bates, Read and Assistant Professor of Theater Tim Dugan have been the only faculty members I’ve ever seen perform in a department production, and there had never been a guest artist before.

While Odle, in hindsight, said that he “would like to say that [he] planned [the casting],” the reality is that it was a complicated process. Read, Meserve, and Odle-Perkins were always going to be in their roles, but originally, both Rex and Hannah were scheduled to be played by students.

The Department of Theater and Dance has struggled significantly, particularly in the last few years, to invite and retain students of color. Choosing “Luck of the Irish” to be performed at Bates was a risk, with its 10-person cast requiring six Black actors and no guarantee that enough Black students would come and audition.

And at first, it didn’t look like the risk paid off: barely enough students auditioned. Reese was recruited to play Rex after auditions. But there was no one available to play Hannah, the show’s protagonist.

Stewart graduated from Emerson College with a BFA in Musical Theater in the fall of 2019. She found an ad for the role in a Facebook group and was cast from there. She learned the show in three weeks; the rest of the cast had been rehearsing since the second week of classes.

When I asked Odle his thoughts on why students of color didn’t audition, he told me that “[he thinks] it’s a combination of several things”: “I think there’s some residual effects from some of the issues that we’ve dealt with in the past, issues of racial insensitivity that we’ve had to wrestle with. We’ve traditionally been a department that tends to invite people of color when we need them, but not necessarily invite them to stay.”

In the end, though, it worked out. Having such a range of experiences was a lot of “fun.” Read, Meserve and Reese became valuable resources when discussing the history of discriminatory housing practices, as they could recall their own experiences and share them with the younger cast members. They were aided in that by Diana Zhou ‘23, who served as the show’s dramaturg, researching the history of redlining in Boston and other key records to help the cast build the full world of the play.

Meanwhile, as a recent college graduate with professional theater experience, Stewart can speak to being a working actor, a motivating factor for students like Allen, who performed in partial completion of his thesis in acting, as well as just anyone tinkering with the idea.

The range of experience faded away somewhat once everyone was on stage. Odle-Perkins didn’t appear on stage until Act II, but he unquestionably stole the show right out from under the feet of his elder co-stars.

Reese and Meserve, making their department debuts, brought great energy to the production. Each had standout moments, from Rex’s earnest questioning of whether he made the wrong choice in moving to Mrs. Donovan’s bitter, 50-year-old explosion over not getting what she “deserved.”

Perry and Lugunda also gave excellent debut performances. Lugunda commanded the stage as Lucy, and Perry’s naivete as Nessa put her in sharp but delightful contrast to Stewart’s Hannah. Both have a strong future in the department.

In comparison to some of the other characters, Patty Ann is written more one-dimensionally, but Cassell managed to squeeze a lot out of her. Her accent work was my favorite of the show, and the showdown between her and Lugunda one of my favorite scenes.

Allen did some of his best work. It’s a more sensitive role compared to his last turn in Martin Andrucki’s “Class Notes,” but Allen captured it beautifully. Read built on Allen’s performance to round out Joe Donovan as a quiet, earnest soul who just wants his wife to be happy.

Allen and Cassell’s chemistry lifted their scenes significantly. And speaking of chemistry, Stewart and Ortiz-Cedeno’s made for some of the best scenes in the show. Where Stewart’s Hannah was high-strung and anxious, delivering a beautiful, frantic monologue about motherhood, Ortiz-Cedeno’s Rich was cool and collected, doing everything to bring Hannah back down to Earth. Stewart truly breathed a new life into the production, and it was such a privilege to watch her join us for this performance.

Should Bates continue to do shows like “Luck of the Irish,” which are a challenge to cast? Wouldn’t it just be easier to fall back on the ol’ reliables? Odle said, “we need to do the exact opposite. We need to really lean into it and show folks this is not a one time thing, that we are going to continue to do work that centers people of color and keep that call out there and do what we can to help folks find a way to make this a part of their Bates experience.”