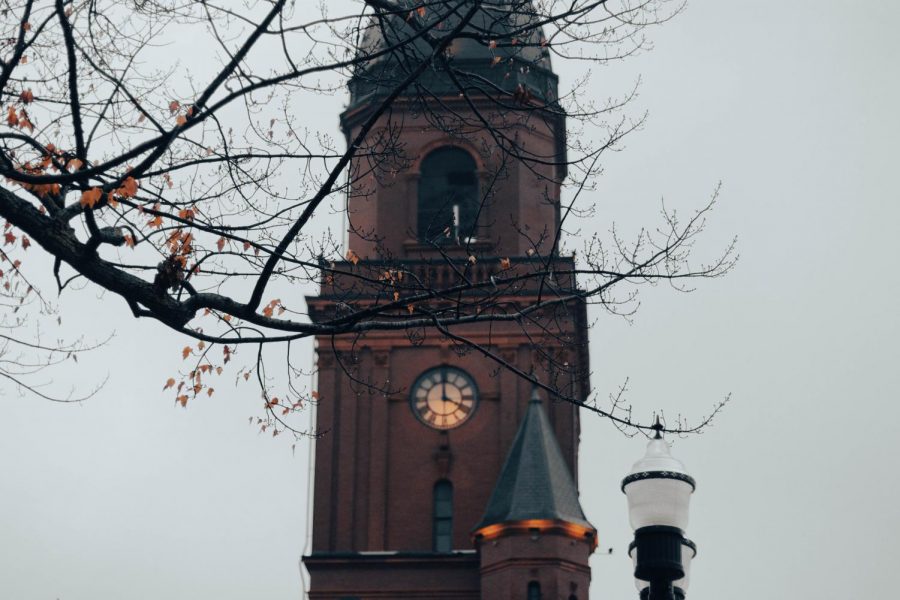 The Lewiston municipal election is set to be one of the most significant in recent memory.

Chances are you’ve come across some signs about school committee or city council candidates while walking and driving around in Lewiston recently. Or maybe you’ve seen advertisements about Question 1 and the possibility of a high-impact electric transmission line project in Maine. That’s because Lewiston’s municipal election is right around the corner — in fact, you can head to City Hall and vote early today or tomorrow if you’re prepared to vote before Nov. 2.

What’s on the Ballot?

The Bates campus is located primarily in Ward 1 and Ward 3, but some students living off campus may be in Ward 2. A map of the wards in Lewiston can be found here, and sample ballots for each ward can be found on the elections page of the Lewiston city website. Each ballot will also have nine questions about proposed amendments to the Lewiston city charter.

In addition, voters will also be asked three ballot questions on a referendum election ballot. This guide provides a detailed explanation of all the referendum questions, the legislation associated with them, the costs associated with them as well as some examples of public comments filed in opposition and support to each measure.

Question 1, arguably the most controversial, is a citizen initiative question, asking whether or not voters want to ban the construction of high-impact electric transmission lines in the Upper Kennebec Region. Question 1 also asks if voters want to require the Legislature to approve all other such projects anywhere in Maine, both retroactively to 2020, and to require the Legislature, retroactively to 2014, to approve by a two-thirds vote such projects using public land.

It is important to note that this is a two-part question and that the wording of it is rather confusing. A “yes” vote would be in support of banning the construction of these transmission lines as well as requiring a two-thirds vote for approving them, while a “no” vote would be in support of allowing construction to continue and not requiring a two-thirds vote.

It is critical for voters to do their research about this question beforehand and familiarize themselves with the wording as well as the issue itself. Ballotpedia is one resource that helps lay out both sides of this question. For more information, voters can also refer to organizations or political figures that they trust to see what they’ve said on the topic.

Meanwhile, Question 2 is a bond issue question, asking whether or not voters are in favor of a $100 million bond issue to improve transportation infrastructure, such as roads and airports, which can ultimately be used to leverage an estimated $253 million in federal and other funds.

Lastly, Question 3 is a constitutional amendment question, asking whether or not voters are in favor of an amendment to Maine’s constitution declaring that “all individuals have a natural, inherent and unalienable right to grow, raise, harvest, produce and consume the food of their own choosing for their own nourishment, sustenance, bodily health and well-being.”

How to Prepare for Voting

Party affiliation will not be listed next to the candidates’ names on the ballot, so those who are used to voting for candidates based on their party will need to to learn about the candidates in advance to figure out what they stand for. A good place to start might be this candidate forum with the Sun Journal. Additionally, you can check out the candidates’ websites and their social media profiles to get a better understanding of their goals and stances on the issues affecting Lewiston.

Bates Votes, the college’s non-partisan voter education and mobilization initiative, also has information about what you need to know in preparation for voting on their Instagram account, @batesvotes.

If you have not yet registered to vote, you can register during early voting at City Hall through Oct. 28, or you can register when you vote on Nov. 2 at the Lewiston Armory. In order to register, you’ll need to know the last four digits of your social security number as well as your dorm’s physical address. If you live off campus, you’ll need to bring your Bates ID as well as a page of your lease that has your name and address written on it.

You have a right to vote in Lewiston if you are a U.S. citizen and a Bates student. “There might be people who try to intimidate students into thinking that they don’t have a right to vote here. I don’t want people to be afraid because it is a right that they have and it is important that they know that,” explained Amalia Herren-Lage ‘22, co-coordinator of Bates Votes.

That being said, she emphasizes that while voting is a right, it is also a privilege. “I think it’s important to take the privilege seriously and understand that it’s not something you can just do on a whim. It really matters to look up your candidates and look up these questions ahead of time. If you have this kind of power in your hands, you really should use it for something that matters to you, based on your principles and values,” Herren-Lage added.

Voting in local elections can have a real impact, and individual votes do matter. One example that Herren-Lage gave is the role of Lewiston’s school committee. The school committee is responsible for many substantial decisions about budgets, the logistics of learning during a pandemic, how to support teachers and staff and more.

Voting is one vehicle through which we can create change in our community. Though there are certainly many other mechanisms of community organizing and engagement, voting is a particularly valuable tool for making your voice heard, especially in a local context. Keep in mind the significance of the issues on the ballot this year and your role as a voter as you consider voting if you can and prepare for Lewiston’s municipal election.