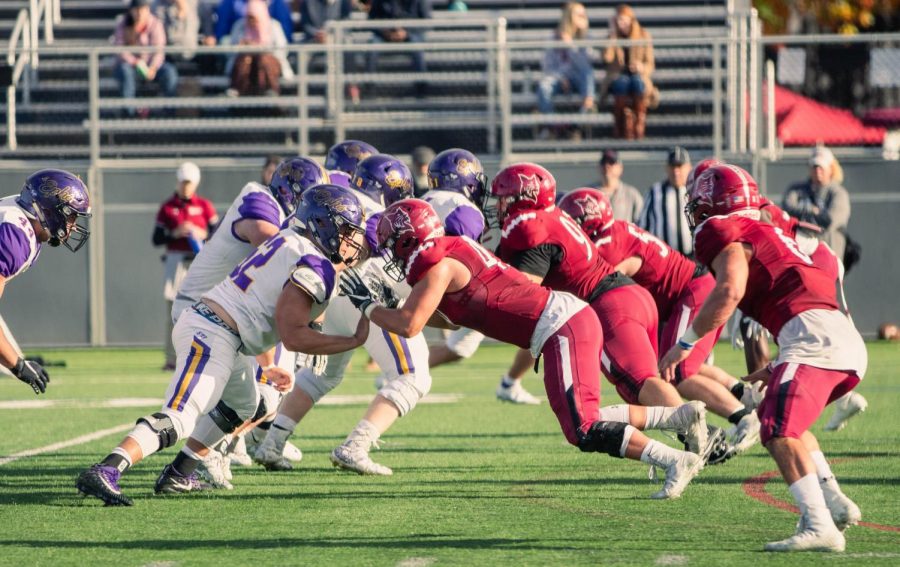 The Bobcats were not able to come out on top in Saturday’s game against the undefeated Williams College Ephs.

Editor’s Note: Quinn’s coverage of the Bates football program features his opinions and quips. If you have any questions or concerns about our articles, please contact Managing Sports Editor Ellie Wolfe at [email protected]

The greatest highs in life are oftentimes followed by the greatest lows.

The highs of a wild night out with friends can be quickly soiled by the lows of a brutal hangover and a $300 Uber cleaning fee on one’s credit card statement. The thrills of foregoing contraceptives can be subsequently drowned out by the burning of one’s urine the following day.

Bates’ win against Tufts University on October 9 had served as the high point of the season thus far. A quick look at the upcoming Bobcat schedule nearly guaranteed a dip in form after their performance was at such a peak the week prior. In their next two games, Bates was slated to face two undefeated teams: Trinity and Williams.

Trinity College, without fail, has been Bates’ most difficult opponent for the last decade. In their past five matchups, Trinity had outscored Bates 227-40, including multiple games that produced score lines so lopsided it would cause one to wonder whether Bates had mistakenly allowed the ultimate frisbee team to suit up.

The following week would be no easier as the ‘Cats were slated to square up against an undefeated Williams team that averaged 36 points on offense while only allowing an average of 10 points. On paper, these games looked to serve as a humbling experience for a Bates team that was flying high on the wings of their first win of the season. Despite the difficult road that lay ahead, the Bobcats were determined to give some of the NESCAC’s finest a run for their money.

On the second weekend in October, Bates travelled to Hartford, Connecticut to take on the undefeated Bantams. From the onset, the game was shaping up to be as enjoyable as a colonoscopy from Edward Scissorhands.

After an opening drive that ended in a blocked punt, Trinity took over in Bates territory and wasted little time in continuing their half-century of domination against the Bobcats. Junior quarterback Spencer Fetter connected with tight end Jack Barrett ’22 before finding Jonathan Girard ’24 for the touchdown.

At 6’4”, Girard stands at least four inches taller than any of the Bates defenders tasked with covering him. It doesn’t take a football guru to know a mismatch of this magnitude would be sure to cause issues for the Bobcat defense.

Fetter and his offense didn’t let up, finding Girard once again for a 36 yard completion that put Trinity right on Bates’ doorstep. William Kirby ‘24 made the score 14-0 inside of ten minutes with a six-yard touchdown run. The onslaught continued as Bates failed to secure a first down for their third consecutive drive. The ‘Cats attempted to get some momentum by going for it on fourth down but were unsuccessful. Trinity took over in the red zone before Fetter connected with Devante Reid ’22 for the Bantams’ third touchdown of the quarter.

The second quarter was equally difficult for the ‘Cats. Trinity tacked on another ten points while the Bobcats only were able to secure one first down the entire quarter. Costa’s arm was the Bobcats’ only prayer against a ferocious Bantam defense that held the Bobcats to a mere 16 rushing yards in the first half.

On the other hand, the Bantam offense was soaring, scoring points every time they took the field. Trinity took a 31-0 lead into the break, marking 82 unanswered points scored against the Bobcats dating back to a 51-0 shutout loss in 2019. The Bobcats had reached the mountaintop with their defeat of Tufts only to find themselves in a proverbial Death Valley after Trinity’s demolition job in the first half.

Trinity continued the onslaught, receiving the second half kickoff and driving 70 yards for the score. William Kirby rushed for his second touchdown on the day, making the score 38-0 with a little over thirty minutes played in the game.

Trinity took over in Bates territory and continued to bully the Bobcat defense. Fetter and the Bantams quickly drove down the field and scored their sixth touchdown inside three quarters. The Bobcat defense was unable to secure a stop until the third quarter.

The onslaught was set to continue with the Bobcats once again failing to get in the red zone. However, thanks to a fumble forced and recovered by George Hawkins III, the Bobcats were able to secure decent field position for the first time on the day.

Brendan Costa ’22 looked to capitalize on the turnover as he found Christian Olivieri ’22 for a 28-yard touchdown reception. The score was the lone bright spot for the ‘Cats offense who only secured 220 total yards on the day.

The fourth quarter was nothing more than a victory lap for the Bantams whose thirty-eight point lead afforded them a great deal of comfort as they cruised to their fifth victory while the Bobcats dropped their fourth contest on the season. This game was yet another chapter in the story of Trinity’s domination against the Bobcats who have yet to secure a win against the Bantams since Jimmy Carter was present.

The following week, the Bobcats were at home for the first time in three weeks to take on another undefeated NESCAC squad, the Williams College Ephs. Despite being undefeated, the Bobcats had reason to be hopeful against Williams. Bates had secured multiple victories against the team in recent years, and the previous week’s thrashing against Trinity was sure to light a fire underneath the ‘Cats.

Bates’ performance against Williams was markedly different from the start. Where the Bobcats were unable to start any sort of momentum the prior week, their offense came to life on the first drive of the game. Costa targeted multiple receivers over the course of Bates’ opening drive, including a 31-yard pass to Chris Capo ’22 that put the Bobcats on the Williams six yard line.

A pair of incompletions and a rush for a loss put Bates back at the Williams 13 yard line where the Bobcats would try to settle for a field goal. Unfortunately, their special teams’ woes continued as they had the field goal attempt blocked and recovered by Williams.

Williams, as all good teams do, punished the Bobcats for their mistake. On the first play of the drive, Bobby Maimaron ‘22 completed a 55-yard pass to first-year wide receiver Cameron Lee. to completely shift the momentum in the opposite direction. Thankfully, the Bobcats were able to hold the Ephs to a field goal as Ivan Shuran ’25 knocked through the 21-yard try.

The Bobcat defense, which was badly punished by Trinity a week prior, was in for another challenge against the Williams offense that averaged 36 points leading up to the contest against Bates. The Ephs drove down the field once again, with their running game taking it straight to the Bobcats. The drive, featuring only three passing attempts, culminated in a three-yard touchdown run by Joel Nicholas ’23 to make the score 10-0.

Bates then promptly turned the ball over back to the Ephs after Brendan Costa had his pass intercepted by Calvin Jackson ’24 inside Bobcat territory. Things went from bad to worse for the Bobcats, making quick work of the Bates defense as Mairmaron rushed for a 17-yard touchdown to put the Ephs up 17-0.

Morale amongst the Bates supporters at Garcelon was on par with that of a mausoleum going into the second half. The Bobcats had been outscored 62-7 in three halves of football and the team that had beaten Tufts two weeks ago was a far call from the team that took the field on Saturday.

However, the Bobcats were not going down without a fight. Costa found Sean Bryant ’22 for a 23-yard reception before connecting with Liam Kelly for an incredible 40-yard touchdown strike. The Bobcat faithful hoped the third quarter touchdown would provide a spark for the offense that had, until this point, had resembled a JV squad against the NESCAC’s powerhouses.

Unfortunately, the joy surrounding the ‘Cats’ first points on the day was quickly whisked away as Mario Fischetti ‘25 returned the subsequent kickoff 47 yards into Bobcat territory. Three plays later, Nicholas broke off a 36 yard touchdown run to put Williams up 24-7. Williams’ ability to shift the momentum of the game was truly remarkable. Every time the Bobcats looked to put something together, the Ephs found a way to suck the energy out of the opposing players and crowd.

Williams tacked on another two touchdowns to make the score 38-7 in the fourth quarter. Although the Bobcats were able to pull back a pair of touchdowns to make the scoreline appear less jarring, the Ephs’ beatdown of Bates on home field was another heavy blow to the team and its supporters. Williams left Lewiston on Saturday night still undefeated, defeating the Bobcats 38-21.

This year, the Bobcats are 0-4 against teams with winning records and have been outscored 110-52. Thankfully, the schedule gets significantly easier for Bates, who are fortunate to play the basement-dwellers of the NESCAC in Colby, Bowdoin, and Hamilton to close out the year.

A Bobcat win against Trinity or Williams was always going to be a tall order. Thankfully, after toughing out these two extremely difficult games, Bobcat football and their supporters can look forward to more evenly matched opponents as Bates still has the opportunity to obtain its best record since 2014.