In Defense of Club Sports 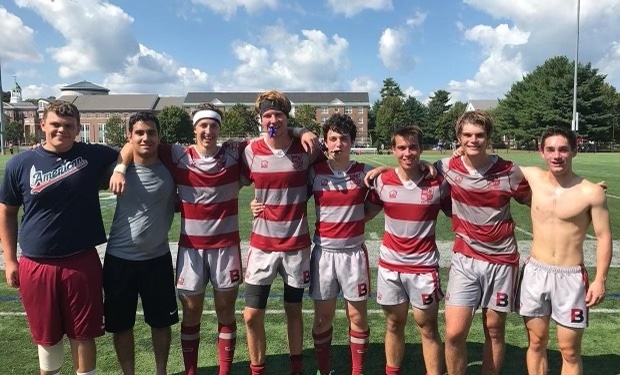 The club rugby team has been an instrumental part of Craig’s Bates experience.

Club sports are powerful. I should know… they changed my life.

Club sports are student-managed teams which compete at an intercollegiate level. They typically operate without cuts or tryouts, essentially allowing students to enter at any level, whether a beginner or an expert. It’s easy to overlook these programs because of the perceived lack of stakes. But club sports aren’t “Junior Varsity” teams. They’re something different—a really, truly special exercise in fitness, responsibility, and inclusion.

I was cut from my high school’s cross country team sophomore year. The coaches wouldn’t even let me hang around in a managerial capacity. High school me was crushed, and certain that this would be the last time I played on any sort of team. Being autistic, uncoordinated, unpopular, gay…these are all factors that made sports difficult for me. Luckily, there was one club sport at my high school: ice hockey.

In so many ways, ice hockey seemed like the worst possible sport for me…aggressive, fast paced, skills-oriented. But it was a club sport, and anyone was allowed to join. So really, it was my only option. I hesitantly took the plunge and asked my parents to let me play. This decision truly altered the course of my personal and academic career.

For the rest of high school, I played hockey. It wasn’t always a smooth ride, but I gradually got better, joining a local hockey club and surprising myself by having the time of my life. When it came time to apply for college, I knew that I didn’t want my hockey experience to end. However, it would be difficult to find a school I liked which also had a hockey program that was accessible to someone like me.

I’d reached out to the hockey programs at all of the schools I’d been accepted to. Some responded. Others didn’t. The Bates Men’s Hockey team went above and beyond, really engaging with me and getting to know me. It didn’t matter that I wasn’t the most exciting prospect and, honestly, wouldn’t bring much to their program. They could see I was passionate and they were kind.

The team even met up with me during Admitted Students day. Honestly, until that experience, I’d been so certain that I was going to Bowdoin, but the patience and engagement shown by the Bates men’s club hockey team pushed Bates over the edge. I knew this was where I wanted to be.

Emboldened by my experience with club hockey in high school and eager for the season to begin, I even pushed myself to join club rugby to “stay in shape” for hockey. I don’t think anyone could have anticipated how important the rugby club would become to my Bates experience, especially since, unfortunately, I did not ultimately end up playing that much hockey at Bates, through no fault of the team.

A series of behind-the-scenes hiccups rendered Underhill Arena, Bates’ on-campus rink, unusable for my freshman year. I didn’t think this would be a big deal, but travelling off-campus at odd hours for hockey proved difficult for me as I was adjusting for college, and I didn’t end up participating in that season as much as I’d hoped.

Rugby, meanwhile, had quickly become the center of my life on campus. I was much worse at rugby than I was at hockey. But the team was just as tight knit and welcoming as the hockey team, and we practiced right outside my dorm, Page Hall. I kept at it, half-expecting every year to be my last even as my mental health concerns grew more complex and confusing.

Bates Rugby Football Club supported and challenged me through these times. I made some lifelong friends and even was elected Vice President my senior year, an honor I never expected.

Unfortunately, the very things that make club sports so powerful (inclusivity, accessibility) can cause them to be overlooked by the college. Underhill Arena is once more inaccessible to the men’s and women’s hockey teams, being used for COVID-19 testing even as the setup has shrunk to a fraction of the rink’s size.

I am once more in the same predicament that pushed me away from hockey in the first place: choosing between sleep and oddly-timed practices at an off-campus rink. This is not an isolated incident. In many ways, the odds seem stacked against club sports, especially contact ones.

I was blocked from playing most of the rugby season due to the stringent screenings we go through for rugby. After being mistakenly diagnosed with a heart murmur, I was banned from playing until I could get a cardiologist to look at me, a process which took much of the season. I was not the only player to receive this misdiagnosis. Oddly, I was not banned from playing club water polo, an arguably equally strenuous and dangerous sport, so I switched to water polo for a few weeks.

It is imperative that Sports Medicine is supported in their mission to keep all student-athletes safe. However, when the strict regulations thrust upon rugby and hockey are compared to those put upon other club sports, the result is somewhat perplexing. It is also worth asking whether varsity athletes would have had to wait over half a season for such a concern to be dealt with. Nevertheless I was grateful to experience a third club sport, just as challenging and welcoming as the last two.

Club sports are special. They’ve been there for me through some of the darkest points in my life, but, like anything, they need support to thrive. In club sports, weaknesses become strengths, and what makes you different is what makes you matter. Club sports truly engage the “transformative power of our differences,” and they deserve consistent and fair assistance from our college.