Take a Spin With the Bates Ballroom Team 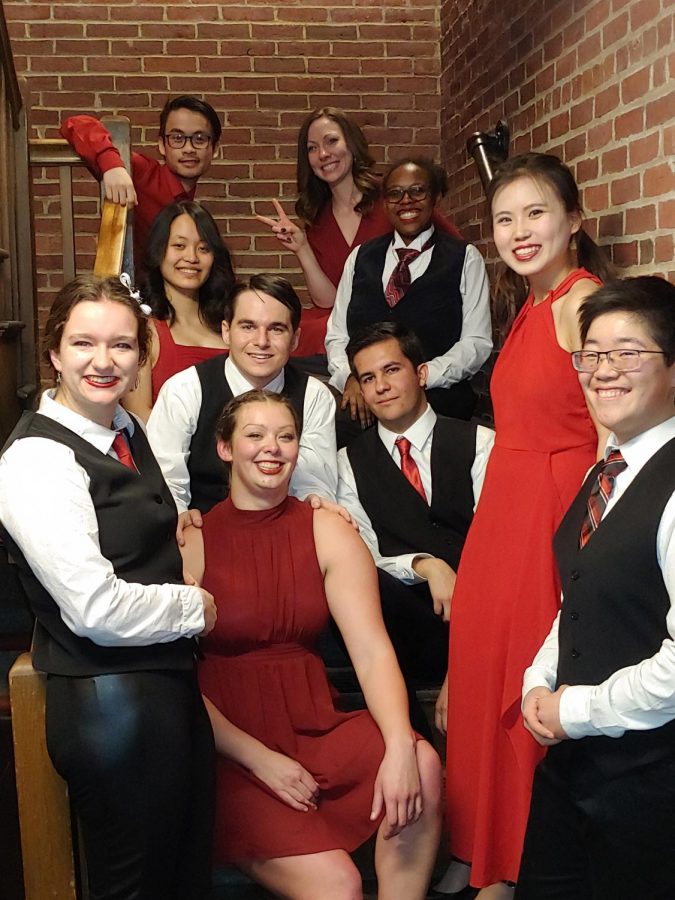 The Ballroom Team before their annual Gala performance in 2019.

Ever watched an episode of “Dancing with the Stars” and thought, “God, I wish that were me”?

Well, this upcoming Saturday, Oct. 9, you can have the chance to make your dancing dreams come true at the Bates Ballroom Team’s first social.

The Ballroom Team is one of Bates’ several dance clubs on campus. Their style of dance originates in 19th-century European dances like the waltz but ranges up to about the 1960s with styles like swing dancing. Some dances, like the foxtrot, are considered “smooth” while others, like the cha-cha, are “rhythm,” or, in the words of President and Community Liaison Anna-Sophia Massaro ‘22, “fun.”

The team performs on campus a few times a year, most notably at Gala, and also attends three competitions, where they’ll wake up at 3 a.m. to get everyone ready to go.

But, first and foremost, the Ballroom Team is a group designed to serve the Bates community. Up until this past year, you could participate in ballroom classes for physical education credits. As only seniors now have this requirement, this class has been cut.

The cut comes as a blow after COVID-19 already dealt the team one. “Recruitment is always hard, but COVID-19 just crushed that aspect,” Massaro, who began her own ballroom career in the class, shared. “But we’re very open to people. It’s totally lowkey.”

Mia Bernstein ‘23, the club’s secretary, agreed, adding that every social begins with a half-hour beginner lesson. “The dances range from easy enough like, ‘you walk in a box to a very slow rhythm’ to ‘you spin around like a madman up and down the floor.’ And we don’t start you with spinning around like a madman,” she said.

Getting involved might sound intimidating, but both Massaro and Bernstein were quick to dispel that. Massaro commented how after her first class, she left thinking that ballroom, her supposed-to-be-easy PE credit, sucked. But she had to keep going back for the credit, and she discovered that it got easier. She was eventually flattered — or possibly nagged — into joining the team by the club’s former president.

Bernstein, a dance major, had been looking for a club to keep her dancing outside of the studio, but she was quick to add that she’s the only club officer who came to Bates with any sort of dance background.

Ballroom teaches you a lot more than just how to dance. It also requires developing significant non-verbal communication skills with your partner. Couples are divided into “leaders” — traditionally men — and “followers” — traditionally women. “You form a kind of bond that’s really hard to describe,” Massaro said, struggling to find words to adequately describe the link she’s developed with her dance partner.

That’s partly why the pandemic has hit the team so hard: With social distancing, dancers couldn’t practice in their pairs. They could still rehearse the steps, but they had to learn what to do with their arms, which are traditionally interlocked with their partner’s.

Capacity limits and travel restrictions meant that competitions weren’t a possibility, either, so practicing became less about working towards a specific competition and more about just being a way to stay connected.

Bernstein also spent time looking into some of the history behind various ballroom dances. Staples like the tango have been appropriated from Latin cultures and Anglicized, and she was interested in exploring the diversity behind what we term “ballroom.”

To celebrate their pandemic successes, the club organized a Club Showcase that also featured the Deansmen, the Crosstones, BatesSpitz, the Chemistry Club and many other groups on campus.

While it was great to see them all virtually in action, now can you see them in-person. Head on over to the Benjamin Mays Center — in your best socks, of course — on Saturday, Oct. 9 at 7 p.m. The beginner lesson will last until 7:30 p.m., and then you’re free to spin the night away!

If you want to join the Ballroom Team, the group has beginner lessons every Monday in the Merrill Gym multipurpose room at 7 p.m.