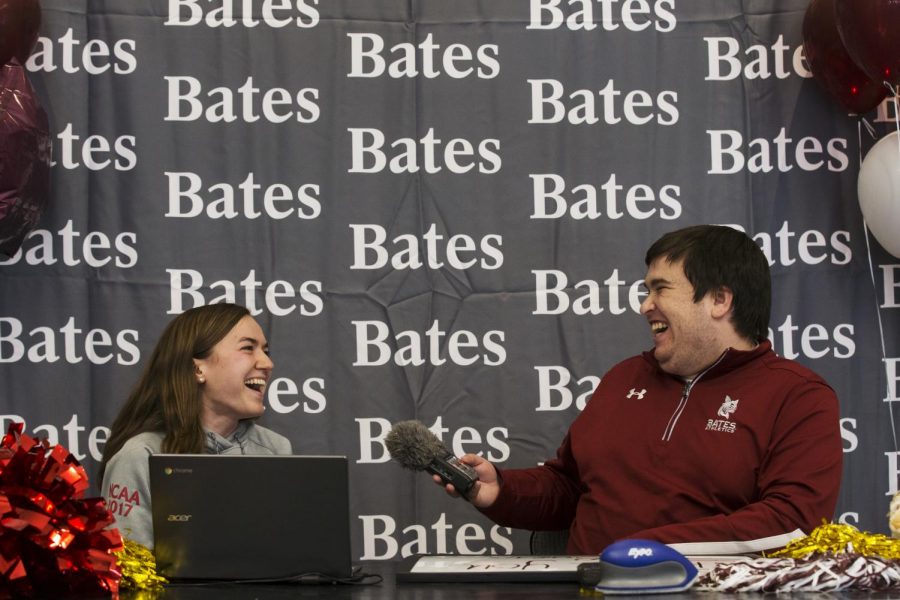 Bates Communications Office Assistant Sports Information Director Aaron Morse reacts while interviewing Sarah Rothmann ‘19, of Andover, Mass., as part of the student-athlete interviews during the "It's a Great Day to be a Bobcat livestream.

The Bates Bobcast has it all: interviews with student athletes, coaches, and alumni; updates on various varsity sports teams; and, maybe most importantly, a catchy name. The podcast, which was started by the sports communications office, is celebrating its sixth year bringing the latest and greatest sports news to the Bates community.

Assistant Sports Information Director Aaron Morse first came up with the idea for the podcast in September of 2015, soon after he started working at Bates. Morse had the idea when he realized just how much he was in charge of covering.

“When I got the position, I realized I’d be helping cover 31 varsity sports,” he said. “That’s a lot of sports and a lot of people to meet and learn about. I thought, well, what’s a way I could learn about Bates but also produce content at the same time?”

New episodes come out every Tuesday and are available on the Bates Athletics website, as well as most streaming services including Soundcloud, Apple Podcasts, and Spotify. Though teams have midweek games, most game days take place on the weekends, especially Saturdays. During this time, Morse works on “recaps, getting all the stories on the website, and doing a bunch of things at once.”

After that, when “the dust clears,” he takes time to assess which teams did really well and which individual athletes stood out. Among those interviewed include the Bobcats of the Week, who are student athletes nominated because they had especially good games or weeks with their team.

Besides the Bobcats of the Week, Morse looks to interview players right after wins. He has a recorder he takes to games so he can grab quick interviews right after the competition ends.

“I might grab an interview immediately following the match with like, the player with the game winning goal, just so I have it going into the week,” he said.

Sometimes after interviewing an athlete, Morse will have ideas for other content and ways to spotlight that person.

“Hopefully what comes from those interviews is more storylines,” he said. “We can follow through other platforms, maybe we want to make a video about this particular student athlete because they have an interesting background. Because there’s different platforms, we can expand from the initial podcast interview.”

Morse said the listeners vary by episode. While he can track the number of listeners on SoundCloud, on other platforms it’s harder to see.

“I’m happy if I get between 200 and 300 listeners on an episode on SoundCloud,” he said. “It’s funny, because when the teams are doing well, the listeners go way up.”

In 2017, when the men’s lacrosse team went undefeated during the regular season and went to the NCAA quarterfinals, Morse said the podcast hit between 400 to 500 listeners per week.

While there is a podcast studio at Bates, because of the COVID-19 pandemic, Morse had to move to interviewing subjects on Zoom.

“There’s actually three microphones in [the podcast studio],” Morse said. “Once we can be indoors together again, I plan on heavily utilizing that.”

While the podcast studio was being upgraded and he and his coworkers were working from home, Morse had to get creative with content during the pandemic. One addition was interviewing alumni about their sports records and achievements when they were students.

“When you go to an athletics website, you’ll see the game recaps, you’ll see the box scores, those are all necessary,” he said. “But to actually hear the voice of the student athlete I think is so important.”