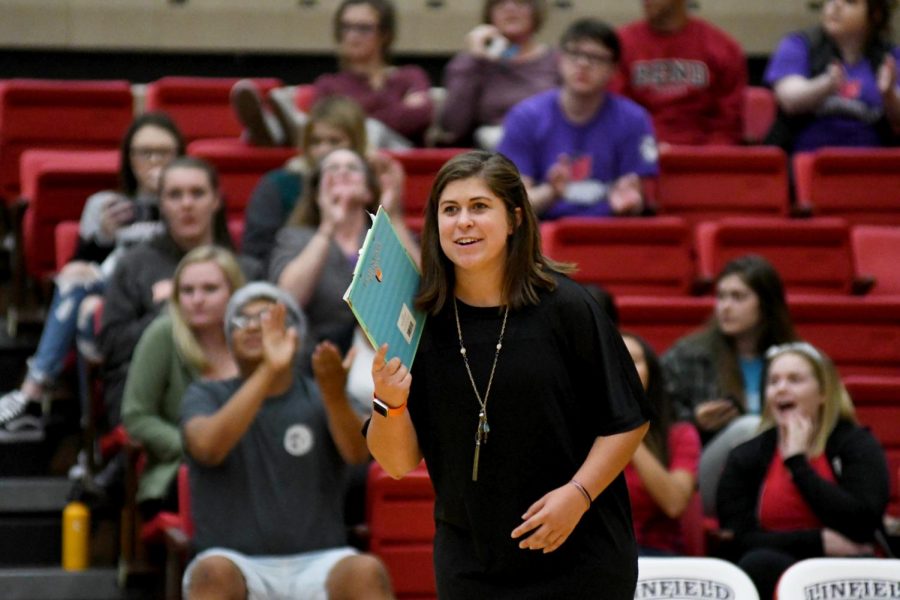 Emily Hayes will take the reins of the new volleyball team, who recently played in their season opener against Husson University.

Emily Hayes sees challenges as adventures, rather than trials, a mindset that has helped the volleyball coach lead so many teams and players to success.

Her career includes assisting a team that made the Elite Eight, coaching All-Liberty League recognition athletes, and, as a head coach, leading a team from a 2-21 record to a 13-10 in one year.

Hayes says the key is to approach challenges, or adventures, as she calls them, as a collective. She hopes to bring this strategy to campus when she begins her stint as head coach of the volleyball team this fall.

“Together we’re going to establish our visions and goals as a program,” she said. “I hope we understand we have an incredible opportunity to be a team working together.”

Hayes began coaching after transitioning into a student assistant role during her time playing at Hope College in Michigan, where she helped the team advance to the NCAA tournament in 2011, 2012, and in 2013, when they made the Elite Eight.

Another career highlight is when she was a graduate assistant coach at St. Lawrence University in New York. Hayes coached six student-athletes that earned All-Liberty League recognition and nine chosen for conference all-academic honors.

After her time at St. Lawrence, Hayes moved to Portland, Oregon to be the assistant coach at Lewis & Clark College; she was promoted to head coach after one year. She made her mark on the program, winning the college’s Coach of the Year award for the 2018-2019 season after turning the team’s record around from 2-21 in 2017 to 13-10 in 2018. Hayes also developed three all-conference players in two seasons.

“The fact that she had success as a head coach before, in a high academic Division III program, was impressive,” he said. “She really turned the Lewis & Clark program around.”

Though Fein said the Bates volleyball team is “already successful and on the right track,” with Hayes’ “skillset and experience, we are confident that she will build upon the success the program has had in recent years.”

Although she wasn’t initially planning on leaving the West Coast college, Hayes felt the position at Bates was something she “could not pass up.”

“I’ll be honest, I was not looking to leave the institution…I’ve loved where I am,” she said. “But I have heard consistently amazing things about Bates as an institution.”

Those things, she said, include “the alumni network, the experience [the college] provides to student-athletes, while also being in a conference of volleyball coaches who are such strong women.”

She hopes to “continue to bring Bates up to the next level,” as she prepares to become the 13th head coach in the program, replacing Melissa DeRan, who resigned to pursue other professional interests after six years. DeRan led Bates to a 63-62 overall record and five NESCAC playoff appearances.

The Bates program has seen two years of graduation since the team’s last match, as the 2020 season was cancelled due to the COVID-19 pandemic. Seven players are returning to the program, and in the fall of 2019, the team went 16-10. Though the youth of the team could be seen as a challenge, to Hayes, it’s just another adventure.

“It’ll be an adventure to have so much newness in the program,” she said. “That’s going to be amazing for us to establish leadership and support for each other.”